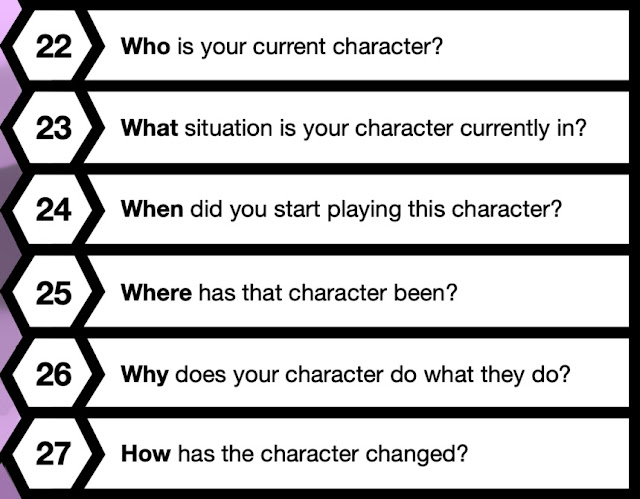 These being separate entries seems...umm...kinda weak. A bit of a cop out if you don't mind me saying. You could have had one of the post days ask say something like, 'Tell us about your current character', and had five more interesting questions for us in the days that followed.
Also, what if you are in more than one campaign and have multiple current characters? Heck, I've been in games of Star Trek and Champions where I played more than one character in a single campaign. That's pretty much the default for Ars Magica. I know I could just pick one but it's just...
Also also, what if you're a 'Forever GM' type of Gamemaster? You're lucky you caught me at a good time as through much of my 45 years in the hobby I was only a GM, rarely playing in any games regularly enough to have a character worth mentioning.
Anyway, I don't really feel like going through each of these individually so here goes nothing all in one fell swoop...
I currently play two characters, though both games have taken a short break due GM and player commitments and end of Summer travel. 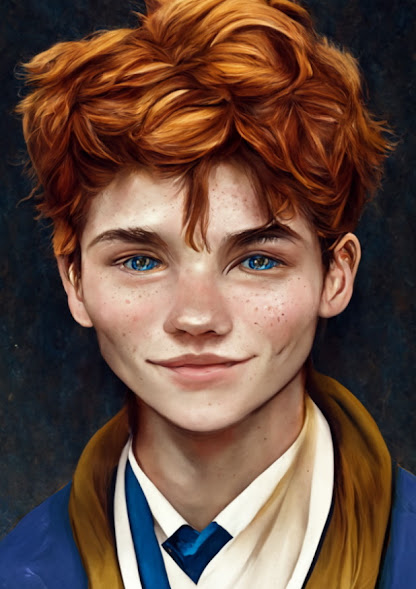 The first is Francis 'Frank' Pellgrove, my 5th Year Ravenclaw student in my friend Alex's homebrewed Hogwarts/Wizard World campaign. He isn't currently in much of a situation, having just completely an adventure arc wherein spirit-like magical entities tried to possess most of the students and facility of the school for complicated reasons.
I've been playing Frank - or Frankie as my friend Dan's character Gretchen calls him - for nearly 6 years now. He's been all over, from Hogsmeade to a Tropical Island full of Pirates hidden inside of Tea Cup.
Frank is a good soul, a salt of the Earth, simple but honest lad from a small, rural farm in Northumbria. He loves animals, be they magical or mundane, is interested in plants, loves food of all kinds (often eating things his friends would shy away from) and never passes up a chance to get dirty. He is a very physical Wizard and therein is what makes him unique and special. He rarely casts spells, keeping his wand tucked away in his back pocket or in his belt.
You see, for Frank, no 'Expelliarmus' is as disarming as tackling your opponent to the ground or punching them in the stomach. For all their powers, you'd be surprised how unprepared Wizards are for someone throwing a hard right hook. Now don't get him wrong, Frank isn't a violent fellow. No sir or madam or anyone else if it please you. However, if you threaten to cause harm to his friends, his family, his school, or any beastie, expect to expecto-ed right in the patronum.
What has changed about Frank over the course of the campaign is so big I am not sure how to explain it here. A lot of it can be summed up in an exchange between Frank and his friend (and fellow PC, played by my buddy Leo), Aremis Bonaventure. Frankie pointed out that the OWLS and NEWTS tests were not something he was really ever concerned about.
Sure, he'll want to do well when he takes them but to Frank they don't matter. Frank will go home and be a shepherd and farmer, inheriting the family farm, small and low-end though it may be. If he passed his tests he'll be a Farmer, if he fails them he'll be a farmer. I cast Hakuna Matata.
Aremis suggested he - Frank - didn't have to be a farmer. He could be anything he wanted to be. This absolutely blew Frank's mind. It has never even occurred to him. When Aremis starting suggesting occupations, including working with creatures (Frank never uses the word Monster) in the field and even a sort of Magical Oceanographer (long story - short version: Frank has developed an interest in boats and Sea Creatures in particular), Frank almost fainted. After that conversation, Frank saw life a little differently; it was not only full of beauty and wonder but strange and unpredictable possibilities. His world got a lot bigger in an instant. 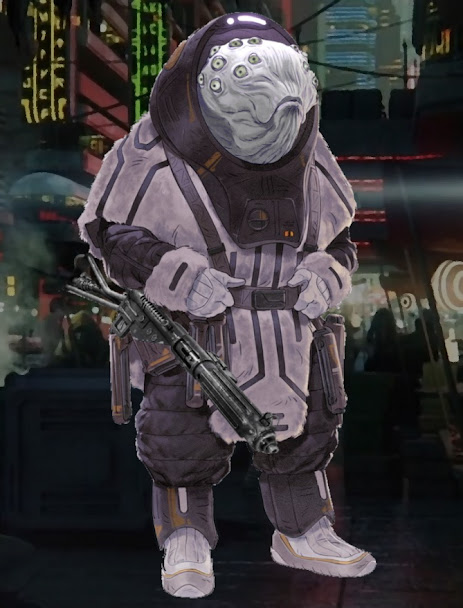 My other current character is Panopus 'Blinky' Dodomek, a Boosodian Mercenary and former Bodyguard to high ranking Hutts in a mid-level cartel. Laid back, gentle giant type fellow with a little 'Goodfellas' thrown in. I'll be honest, I like him but I don't 'know him' yet. He's my character in a Forged in the Dark campaign using Scum and Villainy, as well as a fan produced Star Wars skin called 'Hutt Space'.
It's OK so far. I like it enough but the system kind of gets in the way of just playing the character and the story sometimes. I am far too aware of the gaminess of it. It's still a work in progress though so we'll see how it goes.
That's it. Something else coming later today. See you then.
AD
Barking Alien
Posted by Adam Dickstein at 5:49 PM