Posts are light for all our brethren this time of year it seems. No matter. I have something to talk about, and FINALLY, time with which to talk about it!

My group's new Champions 4th Edition campaign has had one session, and that session freakin' ROCKED!

It's hard to believe it worked as well as it did, but if it hadn't I would've probably turned in my gaming credentials, and taking up stamp collecting as a hobby instead. 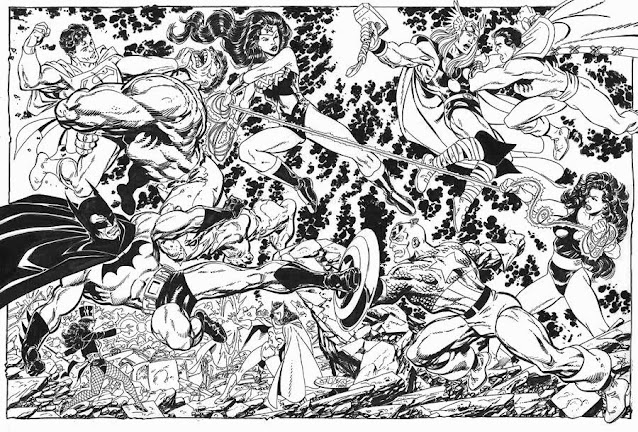 The JLA vs. The Avengers
Commission work by John Byrne*
HERE'S WHAT I WAS UP AGAINST:

Out of 7 players, only 3 are hard core Superhero comic book fans. There are 2 people who generally like comic books, but 1 is a casual fan, and 1 is more of an indie/Vertigo fan (not as into traditional Superhero comics). The remaining 2 are more Anime/Manga fans, only generally familiar with Superheroes through animated movies, TV shows, and live-action cinema.

To run a game to the best of one's abilities, one should run what one knows, and loves. For me, in the genre of Superheroes, that's the subgenre/specific style of comics most prevalent during the late 50's to mid 80's, otherwise referred to as The Silver Age, and The Bronze Age. Now, if you think it would be tricky to run a Supers game for a group in which more than half the members aren't all that familiar with Superhero comics, what are the odds they're going to comprehend the tropes of a particular era of Superhero comics.

Finally, I noticed that a good number of the players tend to run the same types of characters from game to game, regardless of genre. They also tend to approach our games with a particular mindset, regardless of the setting, story, etc. How do I get those same players to play a bit outside their comfort zone, thereby avoiding the same old mistakes, and problems, without making them feel so uncomfortable that they lose enthusiasm for the game, and/or their characters?

HERE'S HOW I HANDLED IT:

First, we (those more heavily into American Superhero comics) gave those less familiar with the genre recommendations as to what to read, and watch to get the right feel for the campaign.

This post ,as it turns out, helped a bit, but not in the way I would've expected. Even before serving as a resource list of places the players could look to for an accurate sense of the games atmosphere and styling, it served as a benchmark to determine what they were already familiar with. Had they even heard of the Justice, or New Frontier series. Did they know who the All Star Squadron or Legion of Superheroes were? How much catching up was required? This allowed Dave, and myself (veterans of both Comic Book and Superhero RPG fandom), and to a lesser extent Ray, to direct the others more specifically and effectively.

Since I was really going for a very particular era of comics, and I realized that even reading those comics may not secure the concept in the heads of the uninitiated (they hadn't grown up on them - they aren't at the impressible age I was when I encountered these stories for the first time), I went to other more readily available sources.

For example, although also influenced by Golden Age comics, the animated series of Batman: The Brave & The Bold is a recent, widely accessible source of Silver Age goodness. Likewise, Avengers: Earth's Mightiest Heroes is a strong early Marvel to Bronze Age Marvel love letter to some of the greatest stories in Avengers history (as well as the histories of some of it's individual members). While incorporating both Marvel Cinematic and current comic book elements, the show is really a shining example of The Avengers in it's Bronze Age heyday.

Now the last part was perhaps the hardest feat for me, for us as a group, to accomplish, even though the solution was quite simple. I simply said no to character concepts that I didn't feel fit the bill.

Normally, I give the players in my campaigns very general parameters for character creation. I see what they come up with, and build our game around their ideas. This time, I said this (Silver/Bronze Age Superheroes) is what I want to run. Make a character for this.

I'm sure I frustrated one or two of the players, but I also got some fantastic characters out of them. Chief among them is Will's character, and that is a big deal for me.You see, Will is the most active player in the game with the least amount of comic book knowledge.

Will is an Anime/Manga fan going way back (although oddly, so am I). His head appears to think in a Japanese storytelling way, not an American storytelling way. What do I mean? Well, simply put, I have noticed for some time now that all the backstories for his character involve a motivating situation, one that propels his character forward toward adventure, or into teaming with the others. Awesome right? A GM's dream you say. It starts as a dream certainly, but it becomes a nightmare very quickly.

Will's first, and foremost goal upon the start of the campaign is to solve his background drawback. For example, in Traveller, he began with the backstory that his character was looking for her runaway son. Cool. Episode one, first few moments of the game, he hires the rest of the PCs to help find the son. I liked that idea, and managed to spread out the search, and rescue into a really good adventure arc.

Then in Bushido, his Samurai's backstory involved him raising his daughter as the Mom died in childbirth. The mother's spirit haunts the house the father and daughter live in. What is the first thing he does? As soon as he is given the chance he wants to have everyone explore the house, discover info about the ghost, and possibly find a way to exercise it.

In Superhero terms, imagine Uncle Ben is dead, and Peter Parker now has to care for his feeble Aunt May in addition to finishing High School, and of course, being Spiderman. Will's Peter Parker would've made a phone call in the first five minutes of the game to have Aunt May put in a nursing home so he doesn't have to worry about Aunt May. 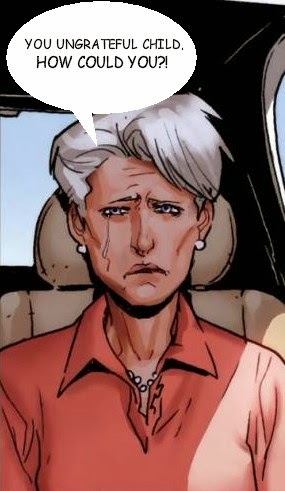 You bastard. How could you do that to Aunt May.


While I may be stretching my theory here, I feel like his is following a Japanese comic book technique here, not an American one. He is trying to get to the 'end of the story'. Unlike American Superhero comics, which generally go on, and on forever, Japanese comics, Manga, tell stories with a definitive beginning, middle, and end. While those endings are sometimes kept vague in case the creator wants to revisit the setting, and characters again at some later date, most Manga series will have a last issue. Spiderman, and Superman, will not.

In the end, Will came up with an idea that was somewhat vague, and ill-defined. It was also perfect. Neither Will nor his character know the exact details of the character's background. He has a distinct goal, a questing beast to chase, but he doesn't actually know who it is, or why he is chasing them. (More about this in an upcoming post).

This one has run long so I'm going to stop here. There is more to come though, so please check back. I have a number of non-Supers related posts coming soon as well, so stay tuned.

Oh, before I go, a Very Happy Birthday to the one and only Stan 'The Man' Lee! Happy 92nd! EXCELSIOR!

*You may notice a lot of John Byrne art lately. That's because he is awesome. Also, while I haven't loved everything he's down professionally over the late decade, his commission work is astounding. Seriously. It amazes me how well he draws classic Superheroes when he doesn't have to draw them in comic books. Jeez. That reads like a slight, but I assure it's not. What I mean is, when he can draw an image in the way he wants to draw it, featuring characters he loves, you can see it in the picture. His feelings for the characters really come through.