For me, it's all about the team. 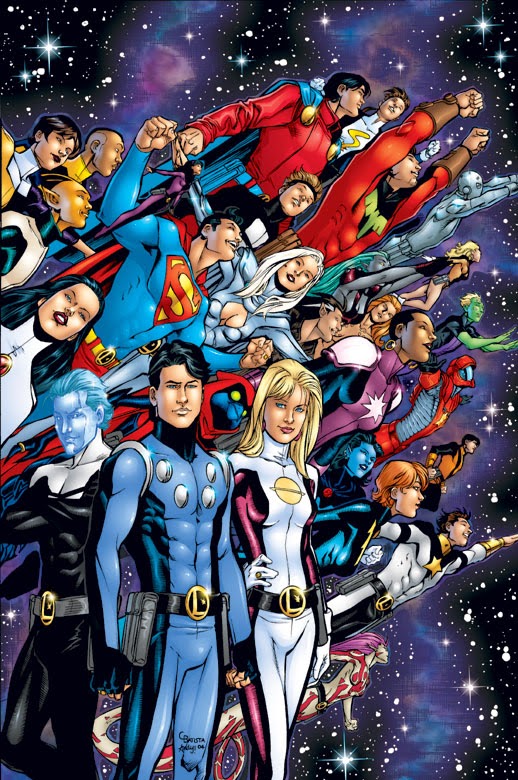 
Growing up reading comics, I was primarily into team books.

I read very few solo titles regularly, and those I did follow were always ones which featured a character who played a significant role on a team. As a matter of fact, while I checked out solo books my friends read, I myself only bought Green Lantern from DC, and Iron Man from Marvel.

Spiderman, a favorite character of many, many of my friends, and recently identified as the highest grossing merchandised character, was never a big deal to me. It's not that I didn't like him. After all, he has a neat costume, and cool, pretty unique powers. He was simply never a character I really collected.

His adventures, and his enemies, were too mundane for me. I was into the big, epic, science fiction superheroes. The thing that turned me off of him the most though, was that he wasn't on a team.

My favorite comics (as I've noted before on the blog) were the All-Star Squadron, the Avengers, the Fantastic Four, Infinity Inc., the Justice Society of America, the Legion of Superheroes, and of course, the Teen Titans, and the X-Men. 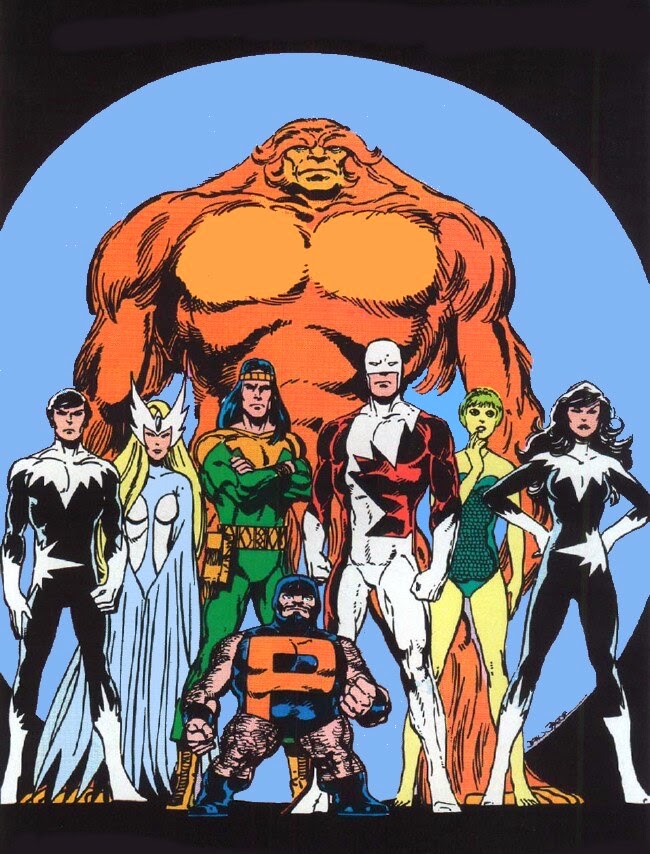 Let's not forget Alpha Flight!
Illustration By John Byrne
When creating a Superhero campaign, it's all about the team, because that's who the Player Characters are. Sure, you're going to get that one jerk who wants to be a 'lone avenger of the night' who doesn't 'play well with others', but you have to let him, or her, know that you're sorry, but you're not the only person at the table.
The group's size, scope, 'vibe', and especially it's interpersonal dynamic, will determine a great deal about the campaign, and vice versa.
I think all too often, many GMs think of the team in a Superhero game the way they think of the party in D&D. Basically, the GM creates an adventure, and a setting for it to be in, and the players generate a bunch of adventurers who go check it out. It really doesn't matter to the adventure who the PCs are, as any group of thrill-seeking, treasure hunters will do.
You can certainly run a Supers game this way, and in fact, in the good ol' days of running Villains & Vigilantes we probably did just that.

I personally take a different approach, and the results are usually much more gratifying.

For the team to really shine as a team, they need to be on the same page. The individual team members may have different styles, approaches, goals, and certainly personal demons, but they share the ideals of truth, justice, helping defend the defenseless and stopping villainy. In addition, it's helpful if some ideal, event, or other element unites the group in a more encompassing way.
The New Teen Titans, the 80's smash-hit comic by Marv Wolfman, and George Perez, began with a story of how one of it's members, Raven, formed the group in order to combat the menace of her father, a demonic entity known as Trigon. One of the great early stories revolved around Starfire's evil sister Blackfire, and a battle with the Citadel, alien tyrants who were enemies of Starfire's people, the Tamaraneans.

In the first instance, while the introduction to the campaign was clearly focused on the Raven PC, it effected all the PCs, as Trigon threatens the entire world. In addition, her backstory and arch-enemy was the catalyst for getting the team together.

In the second example, the team had grown fond of fellow member Starfire, and certainly wanted to help her against her extraterrestrial enemies. A romantic subplot would later develop between the Starfire PC, and another PC, Robin/Nightwing.
From Marvel's Fantastic Four, to DCs Legion of Superheroes, many teams have members whose origins, allies, and enemies effect not just themselves, but the entire group for years and years to come.
The nature of the team determines the type of adventures they go on, and the kinds of villains they face. While it's distinctly possible in the universe of Marvel Comics that the Heroes for Hire might face off against Thanos, it is much more likely they are going to do battle with the Kingpin, or similar street-level organized crime figures.

The Defenders had a tendency to do battle with much stranger, esoteric, supernatural enemies than the Avengers did, while the X-Men's enemies are usually directly connected to the X-Men's status as a team of Mutants.

Consider the difference in character relationships on different superhero teams. The Titans are a family, but there is also a lot of teen romance and angst. The same is true with the Legion, but it's larger membership means the relationships are all the more complex. The Justice League and Justice Society, at least classically, are all adult, professional, friends who happen to work at the same job. In the Silver and Bronze Ages, it wasn't strange to see Clark Kent (Superman) grab a cup of coffee with Hal Jordan (Green Lantern), or the whole group go to a barbeque over at Ralph and Sue Dibney's house (Ralph being the Elongated Man). By contrast, the Avengers are sometimes friends, and sometimes at each others throats.

Be they World Protectors, Neighborhood Patrol, Space Police, or The Teen Team, each superteam's unique personality and style should be reflected in the campaign's design, and the atmosphere the campaign features should be seen among the members of the team.

Our own team is still forming it's group identity, though they share a desire to protect innocent people from those who would use superhuman might, dark magics, and advanced technology to cause them harm.