Imagine if you will one of those company wide, crossover events that comics seem to have weekly nowadays.

Try to remember a time (if you can, and are able to since you were alive and of reading age at that point) when said events mattered. A time when these types of comic book 'Maxi-Series' and 'Mini-Series' were rare, special, occurring perhaps once every few years. The stories in these books were epic, gathering nearly ever major hero and villain together to battle each other, or combining their forces to stop an even greater threat to the very existence of their universe.

Now imagine that the first session of your new Superhero campaign, is the final issue of such a series. 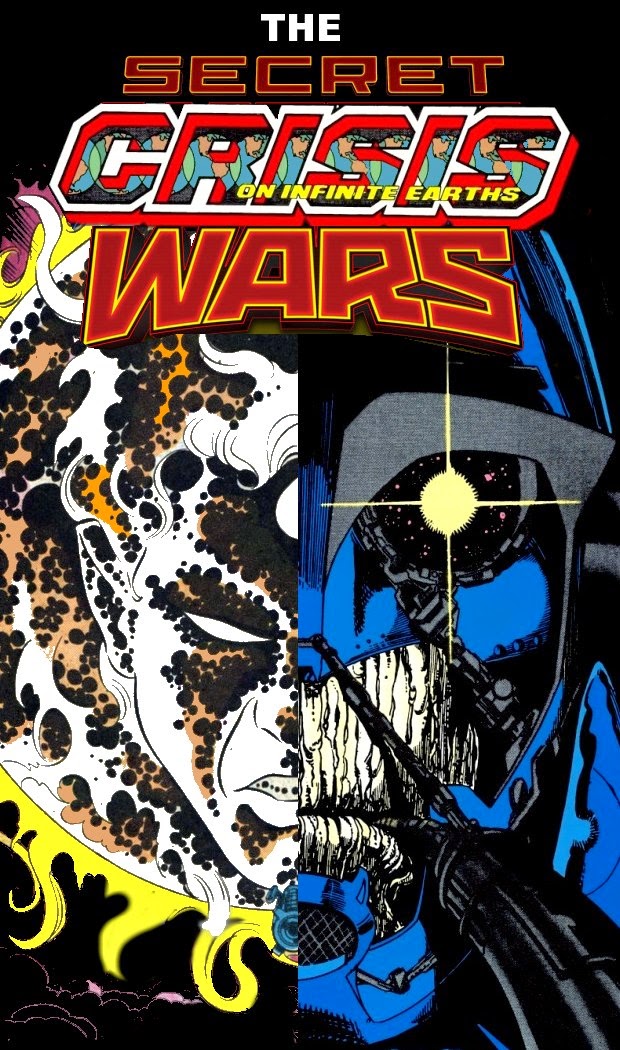 My apologies to Mike Zeck and Bob Layton, and to George Perez.
Our story begins at the end of the world, the destruction of the universe, the final moments for all of time, and space.

The Anti-Monitor, a cosmic entity from the Anti-Matter Universe, was using a wave of Anti-Matter to annihilate reality after reality. As each universe perished, it's energies were absorbed into his 'Life-Shell' armor, increasing his powers. In addition, the Anti-Matter Universe would increase in volume in order to fill the dimensional void that the destroyed universes had left behind.

Meanwhile, The Beyonder, another vastly powerful entity (hailing from beyond our multiverse, in a dimension known only as, 'The Beyond Realm'), discovered the Anti-Monitor's activities, and was both fascinated, and displeased. While there was nothing he could do about those universes that were already gone, the Beyonder wasn't about to let him eliminate the universe of Champions Earth-Delta Ceti Mu Alpha Delta-1, better known as Champions Earth-Max Duo-1. Max Duo-1 was a favorite of the Beyonder's, for reasons as yet unrevealed.

By utilizing his own reality-warping powers, Beyonder began to absorb the energy bleed off of the various universes wiped out by the Anti-Monitor's Entropic Wave (aka The Anti-Matter Wave) at the moment of their destruction. The wave would wipe out a universe in a destructive cascade, empowering The Beyonder, then the remains of the universe itself would be absorbed by the Anti-Monitor, empowering him. Finally, the quantum space the universe once occupied would be filled with the Anti-Matter Universe.

The Beyonder's end goal was to protect the reality of Champions Earth-Max Duo-1...by making himself a nigh infinitely powerful god-like being in control of it!

While these two villains battled each other for ownership of all existence, the heroes of Max Duo-1 had assembled in an attempt to stop them. After 11 issues of large failures, and all too few small victories, the World's Greatest, and Earth's Mightiest Heroes joined together for one last ditch effort.

Prof. Reed Richard/Mr. Fantastic, The Atom, Iron Man, Mr. Terrific, Doctor Strange, and Doctor Fate, combined their vast knowledge, both technological and arcane, to create a towering device that would set their Earth 'out of phase'. By vibrating at a quantum frequency all its own, their world would theoretically be safe in a dimensional warp all its own while the Anti-Matter Wave passed harmlessly by.

The key to machine's operation was a circular, treadmill-like running track, and four energy conversion ports. The Flash would run around the track, using his incredible speed, and ability to enter alternate dimensions unaided to set the right quantum vibration. Then, the device would receive 'fuel' in the form of the emerald energies of Green Lantern, the nuclear forces of Captain Atom, the Nega-Bands of Mar-Vell of the Kree Empire, and cosmically powered blasts of Alex Summers, the Mutant known as Havok.

By now you understand what is transpiring here, do you not dear reader? Or at the very least, where this new campaign takes place?

Yes my cosmically curious cohorts, this is a joint Marvel and DC universe, where the two companies milieu are combined together. They are not merged. You will find no amalgamated Bruce Parkers, or Clark Rogers here. Superman is Superman, Spiderman is Spiderman. New York City is home to the Avengers, while the Justice League and Superman are headquartered in Metropolis, somewhere in Delaware.

The plot of the story combines and modifies the stories of DC's Crisis on Infinite Earths, and Marvel's Secret Wars (and a little Secret Wars II).

While this sounds long winded and even confusing to anyone who is not a huge comics fan, it was so simple when I described it to the players that we went from introduction, to exposition, to play in about 5 minutes. I s*^% you not! Some of the details above were learned later in the session. It wasn't until the end that we were able to go back over everything to put the events in their proper order. There was also an epilogue, but I'm getting ahead of myself.

So close to success were the diabolical, dimensional deities (at least in each of their own minds), that they couldn't let any actions by the stalwart, Samaritan sentinels stop their parallel planet pummeling plans!

Both the Anti-Monitor, and the Beyonder gathered armies of supervillains to foil the heroes, and perhaps destroy their device. In addition, many villains were sent after items of power, such as The Infinity Gems, or The Spear of Destiny, just in case the heroes attempted to use those artifacts against one of the big bads. 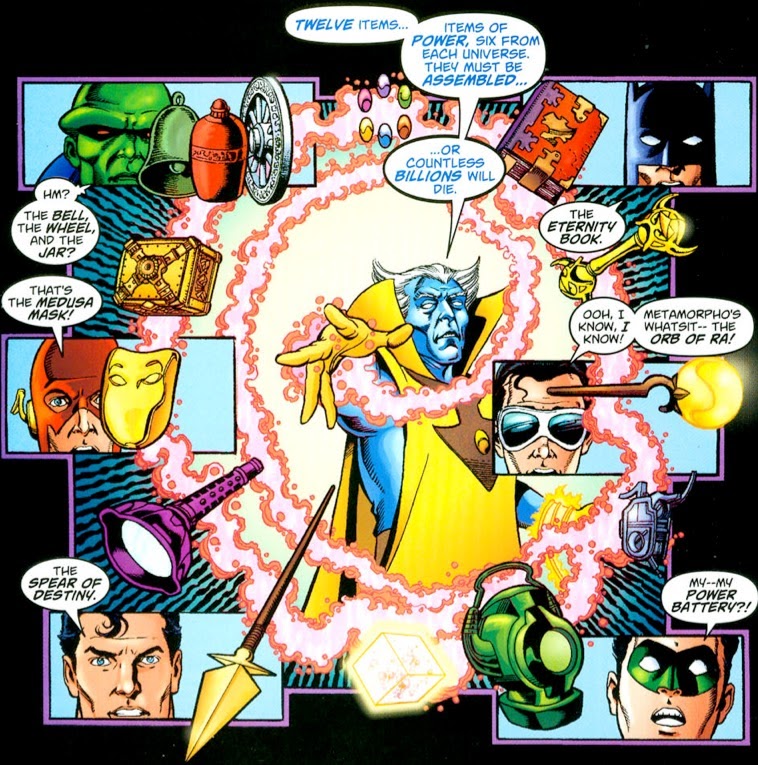 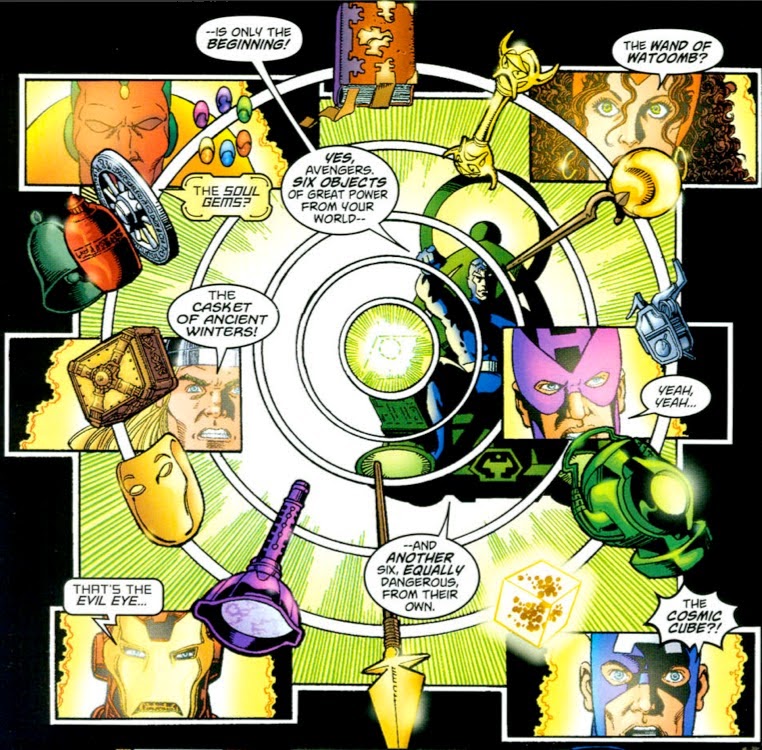 This is where the PCs come in*. Teams of heroes, new, old, B-List to D-List, were sent about the world to obtain these items, or at the very least, keep them out of the hands of the enemy.

The PCs were one such team, and after quickly dispatching their first opponents to retrieve a very special I-Ching hidden away beneath the great temple at Nanda Parbat, the group went to assist another team having a much harder time of retrieving the Holy Grail, currently hidden away in Kyoto, Japan**.

Tomorrow: The team. Their tussles. The outcome!

*This really is odd. In recapping this first session it looks as if the NPCs got all the screen time. It wasn't like that at all. We got into the story quickly, and right into the action just as fast.

Periodically, our 'team leader', Marcus' character, would check in with Captain America to update him on the team's status, or get a status update from him. That is where a lot of this exposition came from (a nifty trick I learned running Marvel Heroic with the kids at the tutoring center).

By breaking up the info they received and sent out into smaller bites scattered throughout the session, I was able to make the situation seem both desperate ("Can't talk now, Black Adam just took out Iron Man! I'll call you back when I can!"), and kept the vast majority of the focus on the PCs.