Prior to this post, I have only mentioned DC HEROES, Mayfair Games' officially licensed , 1985 role playing game of the DC comic books universe, in a single blog entry before this one, and it wasn't the focus of the entry. 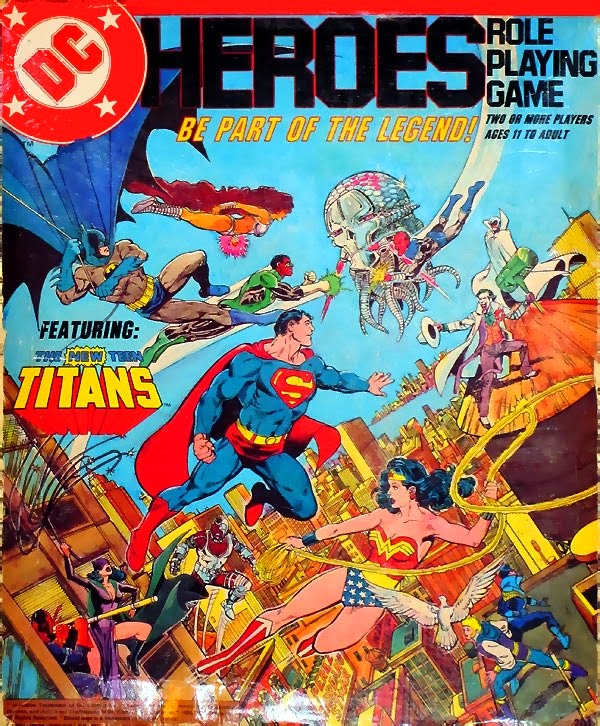 Cover of the 1st Edition Box Set
By George Perez.
I don't think you heard me. I said, "GEORGE F*^$ING PEREZ!"

Great minds think alike they say, and proof positive of this is the fact that WQRobb of Graph, Paper, and Games posted about this very game just a few days ago.

His post mentions how this game - which was well received by both critics, and fans when it came out, had numerous supplements, and three editions - receives so little love from bloggers who devote a considerable amount of their time to discussing, running, and playing Superhero RPGs.

He asks the questions, which I hope to answer in this post of my own, and I quote:

"So what gives?  Is the game a dog with fleas when it comes to the rules?  Are DC-based games just cursed to be badly written (I'm looking at you, DC Universe...)  I need my RPG nabobs to fill me in here. "

First, I would like to point out that not all DC Comics based games are badly written. DC Adventures by Green Ronin, compatible with 3rd Edition Mutants & Masterminds, is excellent.

Imagine it's 1985, you're a 15 year old boy, and the only things you enjoy more than Star Trek are Role Playing Games, and DC Comics.

Low and behold, what should come out at your FLGS, but the box set pictured above.  The heavens open, sunlight shines down on the game, and an infinite number of angels in colorful, spandex tights dance before your eyes.

Having not yet encountered Champions*, DC HEROES was my first experience with a 'point-buy' system (or at least the first I can really recall). It may also have been the first game I played with Hero Points, but I am not certain. In addition, it had a very cool mechanic built into it for handling Subplots. While the main story is going on, each PCs would be subject to romantic entanglements, problems in dealing with their secret identities, and day jobs, your hero's relationship with the media, and normal citizens, and much more.

It was, in short, an excellent game. A streamlined, well thought out, well supported game with some truly innovative approaches for it's time.

I ran several campaigns with it of varying lengths, the longest, and best two were written up as pitches to DC Comics itself. One almost made it, but that sad tale is for another time.**

So what happened? Why don't I talk about this game more often? How come I'm not still running it now? Why did this great game, which featured my favorite comic book milieu, simply fall by the way side?

Well, unfortunately, there were several factors. Largely, it boils down to timing. And timing, as they say, is everything.

The boxed set for DC HEROES came out just before the series Crisis on Infinite Earths, but only by the slimmest of margins. Crisis would significantly alter the make up of the DC Universe, from continuity elements to power levels. This meant that as soon as DC HEROES really caught on, all it's information was basically wrong. 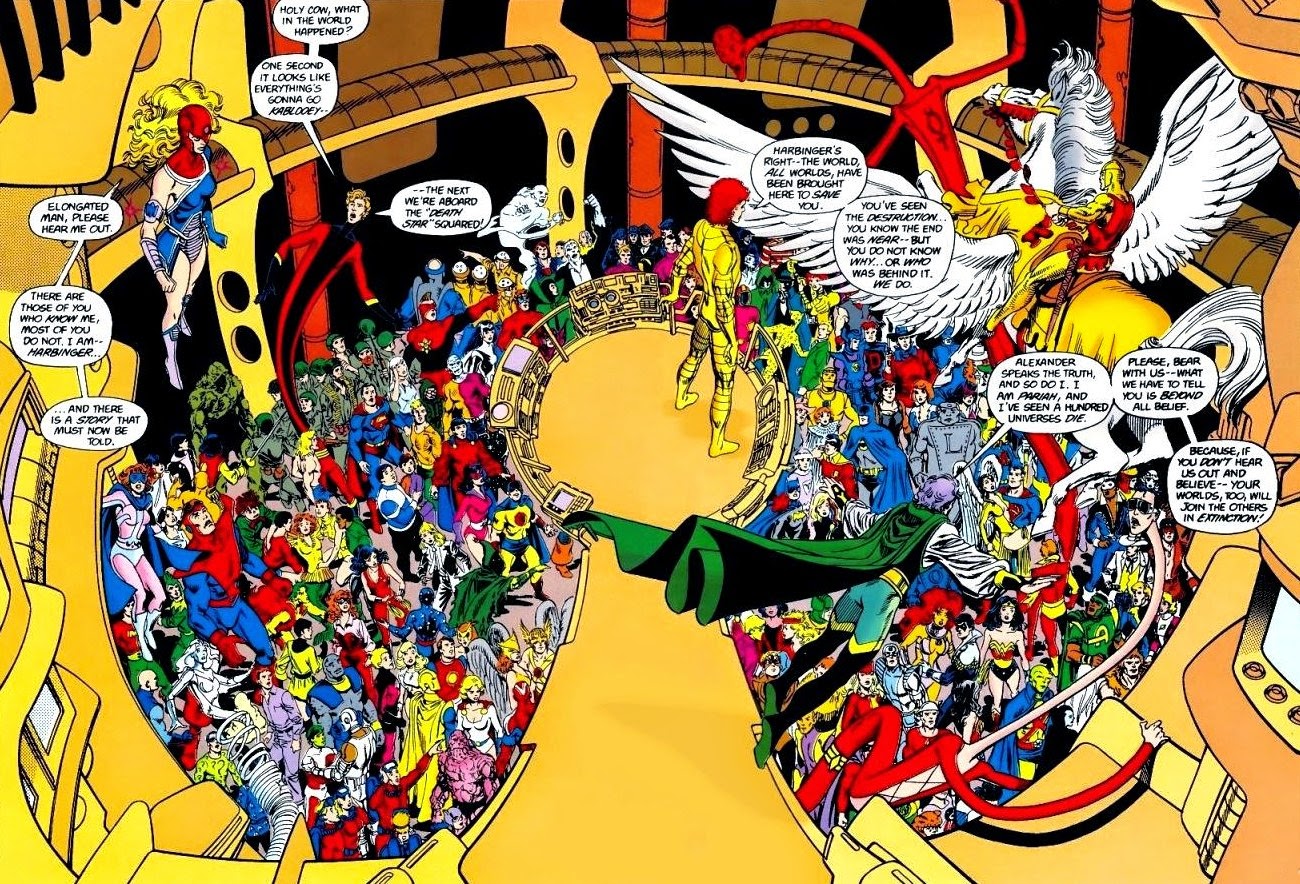 Other drawbacks, at least among the group I gamed with, included the fact that DC HEROES came out not long after Marvel Super Heroes, the original FASERIP game by TSR. Sadly, many of my friends were bigger Marvel fans than DC ones, and a lot of them were already playing the Marvel game. Not only was I more of a DC fan, but I really didn't care for the mechanics of Marvel Super Heroes. More often than not, the compromise when it was time to play a Superheroes game was Villains & Vigilantes, a tried and true favorite of all parties involved.

Within a year or two of DC HEROES' release, a number of games were published that would end up being among my all time favorites. In 1986, West End Games released Ghostbusters. In 1987, they would release Star Wars D6, while R. Talsorian put out both Mekton II, and Teenagers from Outer Space. That was also the same year that the first edition of Ars Magica came out, although I don't really recall playing it until its second edition in '89.

That's a lot of really strong competition for my attention, not to mention the attentions of my players. Add to the fact that I was graduating from Junior High to High School in '86, and the make up of my group was in a state of flux as well. DC HEROES ended up lost in the shuffle.

In 1986-87 (or thereabouts) I started playing Champions under the greatest GM I've ever had the pleasure to game with, my friend and HERO System mentor, William C.. It would be a year and a half of play before I knew the rules to the game, but I was pretty much hooked early on. After the two to three year stretch of campaign he ran that I was part of, Champions came out with it's 4th edition, and that became the go-to game system for all our Superhero games going forward (until Mutants & Masterminds came out that is).

As you can tell from previous posts to this blog, even after trying out, and enjoying, many other great systems such as M&M 3rd Edition, and Marvel Heroic, I still tend to fall back on Champions 4th.

There you have it. DC HEROES was very fun, but it just never beat out those games that were even more fun. It was like a competition where all the participants are talented, and skilled, but in the end, someone has to be in last place. That ended up being DC HEROES.

I've thought about trying her out again one of these days, just to see how the old girl has stood the test of time. Maybe I will, if I can get the gang to shelve their biased towards Champions for just a session, or two.


*I had actually encountered Champions in my FLGS long before I played it. I took one look at the numbers, and the crunch, and put it down. Never gave it a second look. Amazing that I ended up loving it so much.

**One of these days I will tell the story of how I submitted a pitch to DC Comics for a 'Justice League Earth' story (one-shot, mini-series, or series), and how I almost got it through, and had my dreams horribly crushed by an unfeeling world. Ahem. OK, maybe not, but it sucked that it never happened. DC's loss.