Hey there! Thanks for stopping by. Let me show you around my rebooted Character Design Challenge.
For my first entry of the renewed 2022 I wanted to discuss a character very near and dear to my heart - ME! Well...that is the me that serves as the Artificial Intelligence that runs the Yellow Sun, a Space Corps Search and Rescue Vessel assigned to the mission of locating the Jupiter Mining Corporation Vessel Red Dwarf.
Thing is, the Yellow Sun isn't ADAM's first assignment. The ADAM prototype was installed aboard the Deep Space Explorer Blue Giant many years before. 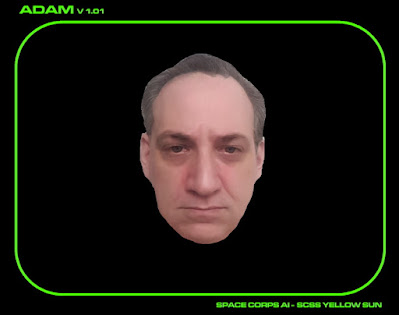 Campaign: Yellow Sun, A Red Dwarf Campaign.
Gamemaster: Adam Dickstein. (See below).
Circa: 2020
Origins: I have been a fan of the British Sci-Fi Comedy Series Red Dwarf since I first discovered it, quite by accident, in 1990.
For years I had ideas for a Red Dwarf game but they wouldn't see use until sometime around 2002 when an officially licensed RPG came out from Deep 7. I was so excited I convinced my then wife Selina to watch a season (or Series as the British say) of the show in preparation of running a short campaign. She loved it and with one other friend of hers we ran a 'Pilot Episode' featuring the Deep Space Exploration Ship Blue Giant. The adventure was a success but conflicting schedules made it difficult to run and a full campaign never took off. 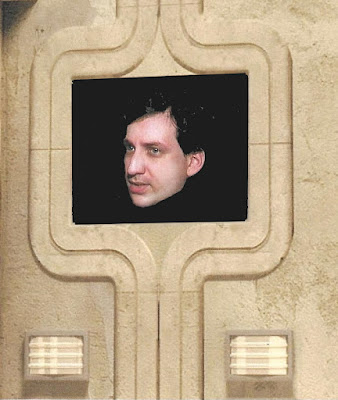 The ADAM X1 Prototype
AI of the Deep Space Explorer, Blue Giant
In 2020, at the height of the pandemic, the British comedy channel Dave released the made-for-TV Red Dwarf movie, 'The Promised Land'. This, in combination with the publication of Free League's ALIEN RPG gave me the idea to revisit my Red Dwarf gaming ideas for a new campaign run over Discord, Yellow Sun.
Backstory: A state-of-the-art Search and Rescue Vessel serving the Space Corps of Earth and its colonies in the later part of the 22nd century, the Yellow Sun is equipped with ADAM an Artificial Intelligence program more advanced than the standard type used by the Jupiter Mining Corporation and other mega-corporate entities. Originally outfitted on the Deep Space Explorer Blue Giant, tragically lost while studying a Stellar Gravitational Phenomenon, the version on Yellow Sun is a copy with some of the bugs worked out, some improvements, and other bugs left in to add character.
After an accident in which radiation kills the entire crew, mutates an escaped chicken, and renders the ship unsafe for its sole surviving Human passenger, ADAM is left on to operate the ship until such time as the radioactivity is cleared.
Three million years later, ADAM awakens comedian Mitchell Webb for Suspended Animation.
Overview: ADAM is unlike any other character I have ever played. As ADAM I am both a part of the Crew and their story, as well as the Gamemaster. This idea, while not unique, is very rarely worked in as well as this.
The concept was introduced in the Deep 7 version of the Red Dwarf RPG and I thought it was freaking brilliant. The only other time I've done something like this was as Jekyll the Jackal in our Toon campaign 'Zoonatics'.
One of the most interesting things about this idea for me is that ADAM is very much a character. It isn't me; it's a character with his own mindset, approach to problems, and he doesn't think or act exactly as I do in real life. Considering who ADAM is, as opposed to who I am, was and is an extremely fun and interesting exercise. 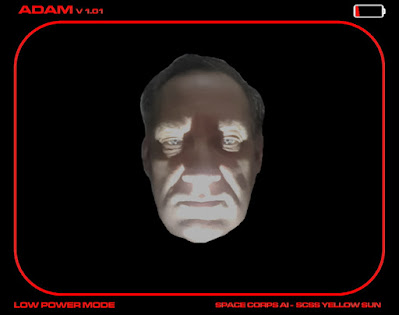 ADAM on Auxiliary Power.
The Highlights:
From a purely fan service/geek perspective I was perfectly set up by my buddy Carl (playing the last Human, Mitchell Webb) in the first session to get to say, "Everybody is dead Mitchell. Mitchell, everybody's dead", a homage to Holly's line in the first episode of Red Dwarf, "Everybody's dead Dave".
During the 'Perfectalizer' story arc wherein a device 'perfects' ADAM to correct wear and tear over the last three million years, I exaggerated his negative features such as a superiority complex, an extreme sense of confidence in his own abilities, and a condescending way of speaking to the crew. I analyzed my own portrayal of the character, realized that all those elements were always there, and cranked them up to 11+.
Some of ADAM's dialogue requires perfect timing I'm not guaranteed to get as I don't know what the players are going to say or when. I have managed to get out some wonderful bits of humor. One subtle but effective line was, 'Incoming object on a collision course to impact with the Yellow Sun. Repeat, incoming object on a collision course." As Lt. Wilder began to ask, "How long before im...", I made a loud crashing and explosion noise. This was following by "Three seconds ago."
Game Info:
There is no Game Info for ADAM. He is the Gamemaster and the Artificial Intelligence that runs the PC's ship. He has no stats and doesn't need any given the structure and nature of the campaign.
At the same time I made it so he can't do everything. He plots the course of the Yellow Sun and steers it but the guns must be fired by a PC. He can open and close doors unless the door requires Command Authorization, in which case he must rely on the Crew. I have an internal logic behind what ADAM's limitations are but as benefits the game, the players are not completely aware of what his limits are.
Notes:
I usually declare Starguard, my Champions character from Will Corpening's 'Age of Heroes' Champions campaign to be the favorite PC that I've played but ADAM comes very close.
I look forward to returning to that universe. 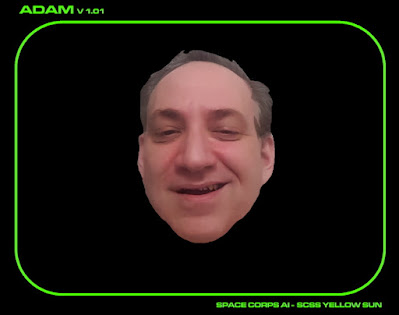 Next, a character who deserves a spotlight given how much I've been focused on Ghostbusters of late. Pour yourself a spot of tea and ask yourself, should a gast appear in your flat - who shall you buzz on the blower? Dr. ALEXANDER D. THORTON, Ghostbuster!
AD
Barking Alien