This post commemorates a fallen character as well as a friend I lost touch with long ago. Sometime after this campaign we disappeared from each others' lives and I've always thought that was a damn shame. Junior, this one's for you. 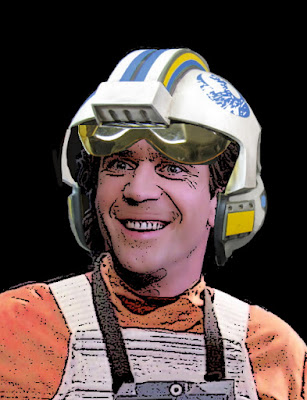 AKA: The Crazy Ace, Blue Seven/Blue Ace
Player: Junior
System: Star Wars, The Roleplaying Game, 2nd Edition - West End Games
Campaign: Star Wars: Tales from The Rim
Gamemaster: Adam Dickstein
Circa: 1992-1993. It is possible I am off by a year or two. It occurred a year before my Ever The Brave campaign, though the story [in universe] is set after that one chronologically.
Origins: My friend Junior was a very cool and dapper fellow, always well dressed as I recall, who frequented the uptown Forbidden Planet when I worked there. We would talk comics, movies, and all the usual geek stuff. He certainly didn't look like a geek, with his tie, leather shoes, and stylish haircut but he was definitely one of us.
One day, he overhead myself, two other employees, and two other friends talking about starting a Star Wars RPG campaign. He was hugely excited. Junior had only played D&D as far as I know and was a big Star Wars fan. The others, some of whom already knew him from the store, made it clear they were totally down to have him join in.
He showed up with a very clear idea for his character - Carlacc Acen, Brash Pilot and former member of the Rebel Alliance. Also, a guy who wasn't necessarily firing on all thrusters...
Backstory: Carlacc Acen Junior was a Rebel Alliance X-Wing Pilot who first flew during the Battle of Endor and became of New Republic Pilot following the end of the Galactic Civil War. A relative rookie, he scored numerous kills against TIE Fighters and Interceptors over Endor and in a number of post-Endor operations against the Imperial Remnants. His original callsign was 'Blue Seven', though he had gotten the nick name the 'Blue Ace'.
Many wondered if Acen was using The Force when he flew, as his split second timing and wild maneuvers would be next to impossible for even the most seasoned of pilots. Acen always attributed to luck that would most likely come to collect some day.
During his last mission with the New Republic Navy, his squadron had been set up by bad intel and was completely wiped out except for Acen, who ended up being captured by the Imperials. Something happened to Carlacc after a year in Imperial captivity and when he was finally transferred to a Victory Class Star Destroyer for transportation to 'Penal Colony Double Zero' he was considered a bit unhinged.
When the Star Destroyer he was on was attacked by the religious sect known as the Ho'Ken'Tota, Acen teamed up with several other prisoners to escape and carry out justice against the remains of the Galactic Empire being run by the mysterious Prakken Drol.
Overview: Carlacc Acen's appearance is no accident - Junior specifically said he wanted him to look like Mel Gibson in Lethal Weapon. He imagined a former Rebel turned Republic Pilot who was constantly holding Survivor's Guilt at bay but just barely.
While initially portrayed in a comedic light, Junior would periodically give much more serious glimpses into Acen's state of mind and the brief but meaningful moments really stood out. I have not idea if the subject was one Junior knew from experience or whether he had simply read a great deal about it and wanted to explore it as a character concept. In either case I feel like he managed to balance the elements of the character very well and it definitely left me considering Carlacc Acen to be one of the most interesting Star Wars characters I've encountered in a game.
The Highlights:
Carlacc was always good for snappy one-liners, reckless actions, and daring saves of his teammates - though they saved him as much if not more often. Indeed it was his friendship with the rest of the team that eventually help him to come to terms with his past experiences and look forward to the future.
That said...
In the final session of Tales from The Rim, Carlacc is piloting a starfighter the PCs helped design and test, the Incom/Subpro Z-100 Skulldiver, against the forces of the team's nemesis Prakken Drol (a former Jedi Inquisitor). With members of the PC group split between fighting Drol personally and handling his swarm of TIE fighters in space, Acen realizes it is a delay tactic so villain can launch an invasion of the planet below. 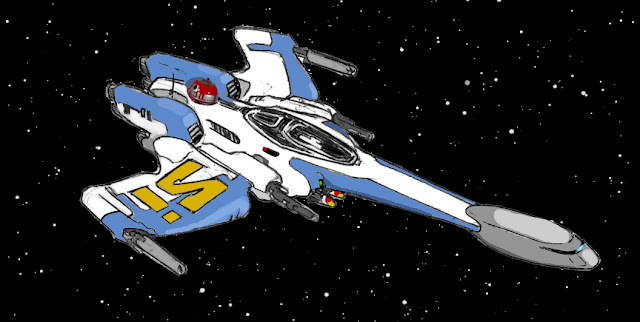 Carlacc Acen's personal Z-100 Skulldiver Starfighter.
Illustration by Aristides Iliopoulos - Colors by Me
With his trademark laugh and some banter to his Astromech Droid R2-D12, Carlacc flew straight for the bridge of Drol's Interdictor Class Star Destroyer, firing everything he had while on route. This included the fighter's nose mounted Ion Cannon and several Concussion Missiles, rendering much of the Destroyer inoperable in seconds. With a loud 'Yahoo!', Acen crashed his vessel into the Interdictor's command center in a blossoming explosion that killed the vessel's Captain, Tar Moloff, as well as Carlacc himself.
His final words before the 'Yahoo' was, "I decide when my luck's run out'.
Game Info:
Carlacc Acen's original Character Sheet: 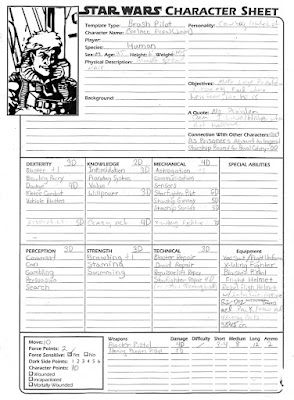 While not noted on the sheet, Carlacc Acen usually fought with a blaster in each hand when in ground combat. His favorite combo was his trusty Blaster Pistol and a stolen...er...liberated Imperial Trooper Blaster Carbine in the other (a shorter version of the Stormtrooper E-11 Blaster Riftle). His Astromech R2-D12 was red and white which was the subject of arguments between the robot and his owner, who thought D12 should be blue to go with Acen's 'Blue Ace' motiff.

Notes:
I don't remember the player's real name.
Our group, myself, and everyone I know that knew him called him 'Junior'. As you can see by his original character sheet, he never filled in 'Player's Name'. We called him Junior so much that even though I [as GM] tried to address the player's by their Character's names during the game, I would always end up calling Junior 'Junior'. It was decided that it was his PC's nickname as well.
I know where he worked and I've tried to find him or find out what became of him but to no avail. Junior, if you are out there and you read this post, check me out on Facebook. I'd love to hear from you again ol' friend.
It should be noted the Junior the Player was an African American Male in his early 20s. Carlacc Acen looks like Mel Gibson. That is what he wanted so that's what he got.
Legacy: In my Star Wars RPG Universe there is a New Republic Flight Training School named after Acen located on the planet Kolindoor.
Additionally, PC Jeard'en Kaine and NPC Naena Moondrift married and had a child and the boy's middle name is Carlacc. He is often referred to as 'Junior'.
From the legends of a distant galaxy to adventure in the Victorian Age, meet the well-armed young inventor DIETRICH ARMBUSTER and the world of Gear Antique!
AD
Barking Alien
Posted by Adam Dickstein at 11:53 AM