Funny story...
A couple of weeks ago in a Chat with my friends from high school (the group that ran and played Ghostbusters: The Home Office , Champions: The Age of Heroes and Age of Chaos, and Star Trek: Renown), we were discussing Comedic/Humorous RPGs when my pal David name dropped Frankie The Ferret, his Toon character from our 1988 'The Boys of Cellgate' campaign.
I said to myself then and there that Frankie HAD to be one of the characters showcased in this year's 31 Days / 31 Characters #characterdesignchallenge.
Three or four days ago I told Dave my intentions and asked what he remembered about Frankie. His answer was...nothing. He honestly couldn't remember a damn thing. Luckily, I keep notes. 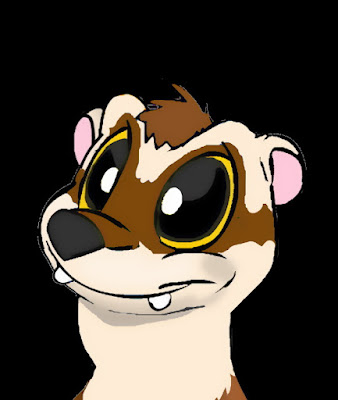 AKA: Frankie T. Ferret. Frankie Ferret. Will not respond to 'Frank' (See below).
Player: David Concepcion
System: Toon, The Cartoon Roleplaying Game  - Modified with various Houserules
Campaign: The Boys of Cellgate
Originally this campaign didn't have a title. It was just 'the Toon campaign'. As is common with my older games, at some point later, often after the campaign has concluded, I'll give it a title when I archive the notes. I think this one was referred to as 'Cellgate' before it ended and 'The Boys of Cellgate' afterwards.
Gamemaster: Adam Dickstein
Circa: 1988.
This was a short though complete campaign, running about a dozen sessions. Maybe less.
Origins: This campaign was a direct result of my friends and I - all students at the High School of Art and Design and Animation buffs - seeing the film, Who Framed Roger Rabbit. For me, this was immediately followed by reading the book the movie was based on, Who Censored Roger Rabbit by Gary Wolf.
Dave really loved the Weasels, the 'Toon Patrol' that served as henchmen to Judge Doom. He was inspired by this gang of crooks, cutthroats, and cuckoos to create what amounts to their more affable and well meaning 'cousin'. The result was Frankie The Ferret. 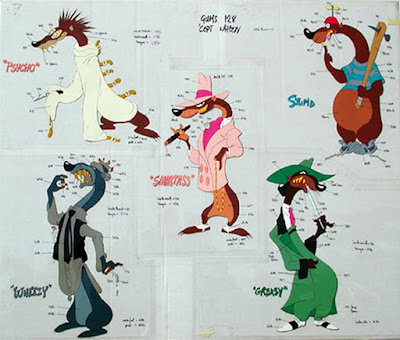 Backstory: Frankie The Ferret was born and raised in the Los Angeles Toon ghetto of Cellgate. By the start of the game Frankie lives in a Half-Wit House (a Halfway House for Toons and Strips Living newspaper comic strip characters also called 'Funnies') along with two of the other PCs, Mister Mooch and Wally Winky.
Frankie occasionally does jobs for the Toon Mob as a lookout and/or a safe-cracker. Frankie isn't keen on doing illegal stuff and wants to stop but he got involved with them in his youth and he can't seem to get out.
When a simple, high paying heist job turns out to be a set-up, Frankie barely escapes with the help of his friends Mooch and Winky, as well as a Strip by the name of Mal. Mal (Mal Function that is), a Robot, was a worker at the warehouse being robbed. The Toon Mob captured him and forced him to give them the details on how to break-in.
When the gang gets outside they are immediately confronted by Police Detective Copper Cody (a Strip) and his sidekick/partner Toon Robbie Rabbit. They were following Frankie and were ready to take the boys 'downtown' until Frankie convinces them to let him and his friends help the detective take the Toon Mob down.
Overview: Although the game was as wacky and comedic as any classic Looney Tunes cartoon, there were also a lot of darker elements as well.
As more and more Toons moved into the area, the old neighborhood of Inkgate was renamed to Cellgate. The Strips were pushed out - more by landlords hoping to rent to Toons than by any animosity between Toons and Strips - and the 'Funnies' became third class citizens.
Black and White Toons found it very hard to get work in the new full color movies and were sometimes treated very poorly by Humans (Wally Winky is a B&W Toon Rat resembling Felix the Cat and Oswald the Lucky Rabbit). There were restaurants that wouldn't serve 'Colorless' customers.
Somehow this all worked with the fast paced hijinks and snappy dialogue, a lot of which I attribute to Dave and his portrayal of Frankie The Ferret. His was funny, sometimes silly, but also clever and sincere. It was definitely Frankie that held the whole thing together, keeping the game focused when things threatened to get too out of control.
I also loved some of the humor that Frankie injected that wasn't so typical of the animated shows of the time but still fit right in. For example, Frankie never answered to 'Frank', assuming the speaker was talking to someone else. Frankie is also referred to as Mr. The Ferret and corrects the person saying, "Ah, it's just Ferret. Mr. Ferret. The is my middle name."
Finally, I really liked how we went from 'well meaning ne'er do wells down on their luck' to real heroes in a way that felt very organic. Friendship and loyalty were keys themes.
The Highlights:
Let's see...
Some of the character's designs were influenced as much by The Bowery Boys and other films of the late 30s and early 40s as much as Merry Melodies and King Features animation. Dave and I, as well as many of the other players, are big fans of the early comedy film pioneers such as the Marx Brothers, the Three Stooges, Laurel and Hardy, and others. Their presence was definitely felt. 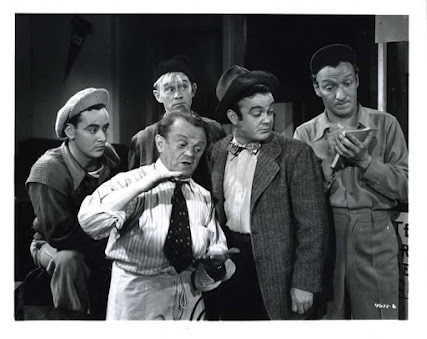 Frankie's main ability and personality trait was talking on and on in nearly run on sentences, jumping from one subject to another, often without warning. Frankie's rambling speech was his greatest weapon, able to confound and confuse even the sharpest of...oh will you be quiet!
In one sequence I recall the group was being introduced to an informant by Copper Cody and Robbie Rabbit. A Toon Mob gangster was trying to listen in to get all their names and figure out how many of them there were. Frankie introduces himself and his friends in a way that completely confuses the mobster, giving them impression of a much larger team. It was a 'Who's on First'-like bit, though not exactly. The mobster reports back and the Mob Boss thinks the police are sending a veritable army.
At one point the police get wind of what's going on with the PCs but they don't have the whole picture, thinking the Player Characters have stolen a priceless artifact from the warehouse in the first session. OK, they did, but they don't have it. They give chase, a fleet of police cruisers chasing their Toon Cadillac Sedan. OK, it wasn't theirs. Mooch borrowed it from a valet friend. At the same time, the PC party was racing against time to catch a Toon Mob lieutenant before he could deliver the relic to his boss.
A car chase ensues with Frank (Who?)...sorry, Frankie...Winky, and Mooch trying to do anything they can to slow the cops without harming them, while Mal drives like a madman (or Robot) to get to their destination. The PCs were tossing things out of the sedan to impede the cops including dry cleaning, a pair of fancy shoes, the seat cushions, the gear shift, the brake...wait. Hmm.
The cops fire their guns and blow out the tires on the party's car (the name of which escapes me), which sends it into a wild spin.  As it whirls out of control, Frankie suggests they throw everything and the kitchen sink at police and the others do just that. Finally,  they all abandon the car just before it crashes - all but Frankie; who insisted he get to roll to see if there was a Kitchen Sink in the car. Indeed there was, indeed he threw it, and it bought the team enough time to escape and jump on a crosstown Trolley. 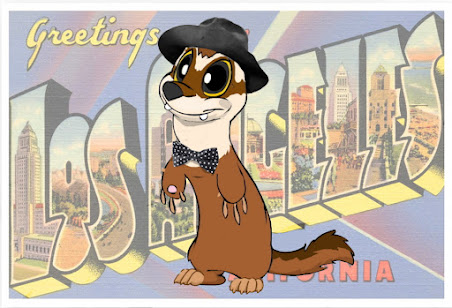 Game Info:
I don't have the sheet for this character as it was over 30 years ago and it was one of my shorter campaigns. As I recall, Smarts and Chutzpah were his high stats. His Schticks included Incredible Luck and Baffle, one we made up that enables Frankie to confuse people by talking to them.
It's been a long time but I haven't run a lot of full-on Toon campaigns, so the few I have really stand out in my memory. Dave Concepcion's commitment to character, sense of humor, and grasp of the genre not only gives this campaign a unique identity but elevates it above a simple slapstick comedy.
AD
Barking Alien
Posted by Adam Dickstein at 12:28 PM