For some time now I've been hoping to introduce a new series of posts entitled Player Profiles; a collection of write-ups on some of the wonderful people, and fantastic players I've had the privilege to know, and gamemaster for over the past 39 years.

It will be quite impossible to cover everyone - some friends I've lost touch with over the years, some have passed on - but given enough time, and with enough determination I should be able to introduce you all to the gamers that helped shape my love of the hobby.

If you don't see a write-up with your name, but you feel you should based on the premise of this series, do not despair. You simply haven't see one yet.

The honor of the first Player Profile goes to my dear friend David Concepcion. 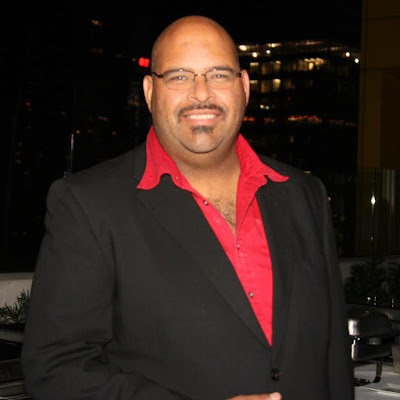 I met Dave in 10th grade, my first year at The High School of Art and Design in New York City. I met a number of my long time friends here, played some of the best (heck, the only) games I truly enjoyed as a player, and gamemastered the campaigns that would solidify my style of play. Though we didn't know it at the time, Dave would be instrumental in that development.

I'm not sure it was gaming that first brought us together as friends. Maybe it was. We had a lot of common interests. Comic books, Star Trek, Star Wars, the Beatles, Monty Python, Film in general, Anime, the Muppets,  and a host of other things.

Our first game together...that's tough. I know it was one I GMed, and he played in. It may have been Star Wars, or Star Trek. It was instrumental though in bringing us together as friends with similar outlooks, and the key to meeting many of the other people you'll see featured in later entries.

Dave is what I would call, a good guy. A genuinely good Human being. He's easy to make friends with, and honestly hard not to like. He's creative, and thoughtful. Deeply thoughtful given the time to sort it all out, and I can appreciate that.

As a gamer, well as a player to start with, he brings a sense of his Humanity to the table that I've rarely seen elsewhere. His characters, all of them, are subtly nuanced with real people thinking, and real people emotions. They are not caricatures, but three-dimensional, living breathing people.

Sometimes that stops them from standing out when the rest of the group are playing over-the-top, action movie heroes. That's fine for Dave (and for me). He is a character actor. While he can certainly take a starring role, I remember once telling him, "You play the most amazing second-string characters I've ever seen."

His greatest, and most memorable PCs to me (at least) are:


What Dave brought to my games was charm, warmth, layers of perfectly crafted imperfection, wit, humor, and the idea that RPGs can go deeper.

Thanks Dave. Love you brother.


Now, David Concepcion in his own words...

"Who am I? I'm a writer going on 40-plus years of doing it, but to this day I still hate writing short paragraphs about who I am. Who I am is a long autobiography that I'm not best prepared to cover just yet. While I work better in short form writing (or even full length screenplays), short form misses too much of me, and my life.


Also, it often depends on my mood. I know my mood shouldn't affect my history, but it does affect how I look back on it. Right now the best I can say is that being a writer, I am a creator of things big and small; considering all I've been through in my life, I am a survivor. So there's definitely a yin-yang aspect to my life, and who I am. I try to stay positive but it is much, much harder than it used to be. Too much has gone on to keep me from keeping on the sunny side of things. Basically I'm a nice guy whose sense of humor was shanked with a broken bottle in a bar fight.


Having said that, there have been oases of peace in my life that have kept me going. Two of them kind of merged for a decade or so: high school friends and role playing games.

Going to an art school has been beneficial not only for the stuff I learned in classes, but for the close circle of friends I had all four years there. My closest circle of friends were role players. Our love of science fiction, and comic books found a natural outlet in games of superheroes, the Star Wars and Star Trek universes, and cyberpunk and steampunk scenarios. We were the Knights of the Breakfast Table, and if we weren't doing last night's homework five minutes before class, we were rolling d20s for the continuing of campaigns. Friends made through RPGs are still friends today, and have stood the test of time.


I think my favorite part of RPGs were the immersive theater aspects of storytelling involved in it, combined with the appreciation of living out sci-fi/fantasy films we loved, while creating our own thrills with multi-sided dice and the unlimited special effects budget of the mind. Playing in an Adam run campaign is often particularly fun because as a player (not just as a PC), I got to shape the story of the campaign more than usual. When Adam tells me his idea for a campaign/game, I usually get to ask what he needs for that piece. Somehow there's collaboration to find a character that not only fits, but enhances the nature of the drama.


Whether it be leading PCs (Federation Starfleet Captain Logan Hendrix; Yoshi Yamashita, a Ronin who turned Daimyo), or supporting PCs (Chakagawa, a Wookie “shaman”; a media jock/DJ playing street fixer undercover to get better stories), any of my actions have a great impact on the movement of the story arc and the game. It helps that Adam really listens to his players, and is ready to roll with the punches no matter what. His games have always been favorites of mine to be in as well as to watch the action around you."

A special thanks to David for participating, and writing this up.

*My one regret with this post is I couldn't find a clear picture of Dave in a hat. I have always been envious of his ability to look good in hats. Seriously. He's a hat kind of guy. I think, "Man, I look so goofy in hats. You know who looks good in hats? Dave".