Hello internet, and welcome to Barking Alien for July, 2016!

A Happy Canada Day (July 1st) to my viewers up North, and a Happy Independence Day (July 4th) to those of you in the United States of America!

For July I'm lifting my self-imposed ban on discussing Sci-Fi, and Supers, opening the floodgates for talking about pretty much anything. Also, going to try for more, shorter posts this month. No guarantees, or promises, but that's the goal.

I don't really have a definitive point to make, or even an objective with this post beyond, 'Here's how I feel about Combat in RPGs. Let's talk about it.'

Let's begin by pointing out the 800 pound gorilla in the room... 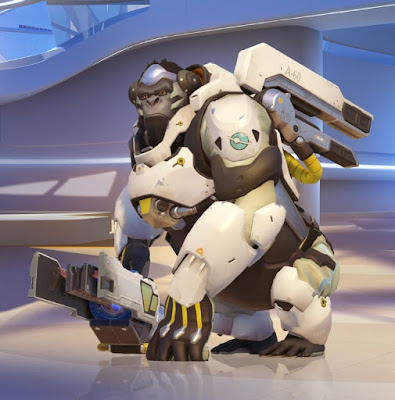 Minus all that power armor of course.

...Most RPGs have a heavy focus on combat.

No groundbreaking observation there, but it deserves to be mentioned at the start of this for the sole purpose of setting the tone for the rest of the post. This is a truism, a point of fact. Like science, and unlike belief, it can not be unproven, argued with, or denied.

Is it the focus of all RPGs? No.

Is it the focus of every campaign in RPGs where combat is normally a major factor? No.

Must it be the focus of our hobby by the very nature of both RPGs and combat? Ooh...now we be getting all philosophical up in here.

Now, what exactly do I mean by that last statement? Well, let's break it down shall we?

RPGs are largely improvisational storytelling with rules, geared toward action/adventure themes. RPGs about getting a job as an assistant copyright lawyer for a small, text book publishing house, however exciting you may feel that is, have just never caught on.

RPGs are descended from war games. They are about warriors, soldiers, mercenaries, and other fighting types going to battle against others of their kind, or other combat oriented opponents such as monsters, aliens, robots, or whathaveyou. Even when playing a thief, or a wizard, majors concerns are given to combat effectiveness in the form of special 'sneak attack' abilities, or damage causing spells.

With these conceits established, and for the purposes of this post (at the very least) accepted, I can finally get into the arena of opinion.

If combat is a central (if not essential) element of RPGs, why the heck is it so damn complex, and boring most of the time?

Oh no you didn't.

That's right, I said it. You heard me. Boring.

The majority of RPG systems out there make combat far too mechanical. What do I mean? I mean that it is reliant on rules, and the roles of dice, and not on any real input from the player, or even the GM in many cases.

Did you come up with a truly creative tactic, a 'smart move' as we're want to say? Does it matter? Isn't it just a plus one here, or an additional die added to your pool there? What influence does your creativity really have on combat?

After coming up with a brilliant battle plan, you get a +1 or +2 from some feat or other, and you still fail the roll, meaning all that planning was meaningless. Sure, that random element of rolling the dice can be part of the excitement, but I've often ended up feeling (and seeing players who feel) like they were just brilliant for nothing. The creativity of the player/PC is not nearly as effective in a fight as having the best stats, or the 'right build' (*puke*).

One of the things that turned me off to Margret Weis Productions Marvel Heroic game over time was the feeling that a bunch of dice were being rolled against a bunch of other dice, with no real thought, or emotion invested in what it all meant in game. It was just a collection of numbers being assembled against other numbers. Was that a roundhouse punch, or an energy blast? Is there a difference? Combat in that game (and in many others), which is a huge part of each session because of the genre (Superheroes) feels so abstract it might as well not include saying anything. Just roll, compare, and note stress damage, or who won.

What can we do about this?

Well, I've discussed before how the GM can jazz up the in-game descriptions, and even conditions to some extent, but I don't know if that's enough. Does that fundamentally make the activity of getting to, and partaking in combat sequences more exciting?

The fundamental issue for me really does come down to mechanics for the most part. The most exciting, memorable battles I'm been in as a player, and ran as a GM were largely despite the mechanics, not because of them. It was the GM, not the game, that injected some amazing description, or made a rule on the fly to explain how the participants of the conflict, and the objects, and terrain around them were effected.

That's how it should be right? Sure...but then why do we have so many pages of rules in so many games dedicated to combat when the best part of it is coming from the players, and GMs. All a thousand combat options seems to do is slow down combat.

What's the alternative? Am I advocating we all just wing it? Should combat be purely narrative? Well, no...I don't think it works to have it be all narrative. What's to stop the PCs, or the GM from just doing whatever they want all the time. There has to be some rules, right?

I discussed this subject with a friend today, and although we didn't get to address it at length, it was interesting to note that his first words when I said, "Do you sometimes feel like combat in RPGs is..."

If combat is going to be such a big part of what we do, how do we make it continually interesting, without resorting to a purely narrative approach?