Continuing my rundown of who is and isn't in the super biz in my Earth Alpha D-1 campaign setting, I thought it might be a good idea to tackle the task by identifying the characters and the particular group affiliation they maintain.
The world's foremost superhero team is the Justice League of America. Often referred to as the Justice League or simply the JLA, my incarnation aims to incorporate the classical line-up as much as possible. As of 2010, the JLA consists of Aquaman* (King Orin of Atlantis/Arthur Curry), Batman (Bruce Wayne), The Flash (Wallace 'Wally' West), Green Arrow (Oliver Queen), Green Lantern* (John Stewart), Hawkgirl* (Shayera Hall), Martian Manhunter (J'onn J'onzz), Superman (Clark Kent/Kal-El) and Wonder Woman (Princess Diana of Themyscira). There are dozens of part-time, associate and reserve members (including the staff and students of the Justice League Academy) but those listed are the primary, standing roster. The Justice League is headquartered at The Hall of Justice (located in Metropolis) or their orbital space station known as "The Watchtower".
The second most prominent team is the Justice Society of America. The JSA are one part superteam, one part social club and help train those legacy heroes descended from their various Golden Age members. Currently the older members are referred to as the Justice Society while the younger, newer members are often called the Young All-Stars or (as they themselves prefer) The All-Star Squadron*. Current membership includes Atom Smasher* (Grant Albert Emmerson), Cyclone (Maxine Hunkel), Dr. Midnight (Pieter Anton Cross), The Flash (Jay Garrick), Green Lantern (Alan Scott), Hawkman* (Carter Hall), Hourman (Rick Tyler), Liberty Belle (Jesse Chambers), Mr. Terrific (Michael Holt), Power Girl (Karen Starr/Kara Zor-El), Stargirl (Courtney Whitmore) and Wildcat (Ted Grant). Associate and other allied members exist but I'm focusing this team being a bit smaller than it often appears in the comics these days. The team is based out of New York City.
No list of DC Universe superteams would be complete without the Teen Titans, who are among my personal favorites when done well (which hasn't always been the case sadly). The main difference between the Titans and our version of Young Justice is age; The Teen Titans are roughly high school age (13-19) for the most part while Young Justice is a roughly college age group (20-26). The other major difference is that the connection between the Titans is one of family, even if that family is largely dysfunctional. The current Teen Titans of Earth Alpha D-1 are Kid Flash (Bart Allen), Miss Martian (M'gann M'orzz/Megan Morse), Robin (Tim Drake-Wayne), Speedy* (Cissie King-Jones), Superboy (Conner Kent/Con-El) and Wonder Girl (Cassie Sandmark). The team is lead/mentored by former Titans Cyborg (Victor Stone), Changeling (Garfield "Beast Boy" Logan) and Raven. The number of allied members are far too numerous to recount here. Titans Tower, the group's distinctive headquarters, is located in San Francisco Bay.
Whew, that's enough for now. Next up we'll look at the independant heroes, those characters and teams that are significantly altered from their comic book counterparts and maybe...just maybe...the PCs of Justice League Academy.
A note regarding those names with an asterisk " * ". Characters so noted are slightly different from their current DC universe incarnation but essentially recognizable to even the most casual fan. I have, in these cases, chosen the best possible take on the character or combined multiple incarnations to come up with a version that works for this campaign. For example, on Earth Alpha D-1, Green Lantern John Stewart looks and acts like the Justice League Unlimited animated series version instead of the sad sack version normally portrayed in print.
AD
Barking Alien
Posted by Adam Dickstein at 12:45 AM 2 comments:

DC Adventures - Who's Who

In creating a campaign for Green Ronin's DC Adventure RPG, part of my initial design process was to determine which characters exist (or don't) on my personal infinite earth.

Going with my own belief that DC's strongest asset is its wealth of stories and characters that cover 75 years of publishing, I want as much of what they have developed to be available in my game as possible. I want the possibility of using virtually any location, setting, device, hero or villain ever.

Unfortunately, that does present some problems. DC currently has more than one Flash. Actually, they have three. That's not three characters with superspeed, that's three separate characters all called The Flash. Two of the three wear virtually the same costume. That's kind of silly. So how do I fix this odd situation? Simple (you hear that DC? I said simple...).

For the most part Earth Alpha D-1, as I have designated my campaign world, is identical to the universe any current DC reader is familiar with. Clark Kent is Superman, Bruce Wayne is Batman and Princess Diana of Themyscira is Wonder Woman. All appear to be in their mid-thirties. The Justice League is the world's primary superhero team, Lex Luthor owns LexCorp, the Rocket Reds protect Russia and Joker is nuttier than a PayDay candy bar.

But who is the Flash? Who is Green Lantern? Who's dead?

Let's start with the fastest man alive, shall we? Since Infinite Crisis and Flash: Rebirth returned the silver age Flash, aka Barry Allen, to the world of the living following his awesome death in Crisis on Infinite Earths, Barry has become the title character of the Flash comic book. Unfortunately, this has put the former Kid Flash, Wally West, who has worn the mantle of the Flash since the 80's, on the back burner. In the span of less than a year Wally West went from a major, A-List superhero who appeared on the animated Justice League Unlimited series to a barely discussed B-Lister. Boo DC. Bad form.

So, on Earth Alpha D-1, Wally West is the Flash and serves as a member of the Justice League of America. The reborn Barry Allen teaches Criminology and Forensics at the Justice League Academy facility which houses Operation: Young Justice, a training program for future superheroes and the focus of our campaign. The members of our version of Young Justice are too old to be 'teen' Titans and yet not quite ready for the JLA.

The third Flash is the golden age Flash of World War II, Jay Garrick, who thanks to a mystical time displacement incident currently operates as a mentor and trainer for members of the Justice Society of America.

On to my personal favorite superhero, Green Lantern!

There are thousands of Green Lanterns, two for every one of the 3,600 space sectors of our galaxy. So, Earth's emerald guardians are John Stewart who serves on the Justice League and mainly protects the Earth and Hal Jordan who is more mobile and tends to fly around our sector looking for trouble. Since its been established that Hal is a bit of a maverick and doesn't always get along well with authority in general (and JLA shot-caller Batman in particular), this just seemed logical.

Right now I'm not writing off anyone as definitely dead...except maybe Deadman. For the most part I'll cross that bridge when I come to it. For now, everyone and everything exists. How they exist and where is much more fun to think about than whether they do or don't.

Barking Alien Vs The World 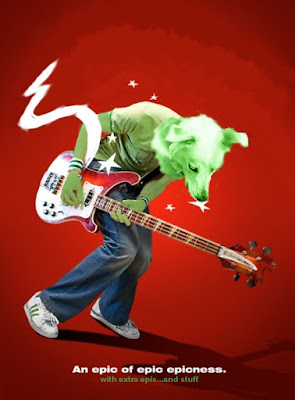 Scott Pilgrim vs The World
If you haven't read the comic or seen the movie do both at once. No, faster.
Where is my Scott Pilgrim RPG? I want to play an epic game of epic epicness that makes me think about death and get sad and stuff. And I want to date a girl who looks like Ramona Flowers in the film. You know what...screw the game...
AD
Barking Alien
Posted by Adam Dickstein at 7:26 PM No comments:

Labels: Scott Pilgrim vs The World

I was originally going to post this the day after the previous entry but in a way I'm glad I waited.

Having had time to think about it a bit more and talk to the players involved, it seems everyone is very excited about the game, DC or no DC. What I mean by that is, for most of the players, just getting the chance to play a superhero game is enough to get them all jazzed. The universe we play in is secondary to the experience.

So, to accomodate that idea and yet get my fix of gaming in my favorite comic book milieu, I've spent a lot of time with each player on developing their characters. Surprisingly, each of the characters they've created fits perfectly into a DC Comics universe. Even the guy who knows the least about DC made a character who screams DC Comics. Its amazing!

I think it helps that DC is such a well known part of the Americana and Pop Culture of our society. Even people who've never read a comic book before in their lives know who Batman is and can recognize the stylized Superman 'S' on a t-shirt. As Alex Ross said in his book Mythology, these characters are part of America's folklore. Not being old enough to have had myths like the Greeks and the Egyptians, stories of Superman, Dark Seid and Batman are our equivalent of the epic and heroic tales of Apollo, Set and Perseus.

So it seems its full steam ahead for this campaign, barreling toward its first session faster than a speeding bullet and more powerfully than a locomotive. In my next post I will describe the campaign's overall gist and hopefully, finally get to the Who's Who entry I've been meaning to do.


Posted by Adam Dickstein at 9:34 AM No comments:

Yeah, I know I said I'd have a new post up Sunday...er...last Sunday not yesterday...but the new job is keeping me quite busy. Its also pretty awesome so far. I play with dogs all day (among other things) so I feel fairly lucky as professions go.
I'm still working on my upcoming DC Adventures game but I'm already running into some minor snags and did a little test run Saturday. Good but far from perfect. Its also really weird to note that my group consists of avid comic book, movie, TV and animation geeks who, quite frankly, are not that familiar with DC comics.
I feel like I may run into a similar situation here that I encountered running Star Trek. My new group is less diverse than my old one and if one member is not overly familiar with a subject its a good bet that the lot of them aren't either (to varying degrees).
Its not that the old group was really any more familiar with my favorites necessarily but they adapted to new things more easily. Also, since they were pretty diverse and older, the chance that at least one or two of them would be knowledgeable on a given subject, genre or universe was vastly better.
The bottom line is I really want to run this DC Adventures campaign and I'll just have to find people who want to be in it. I hope that the group I have in mind is really up for it but if not I'll find other people. I can't stop coming up with ideas for this thing and I refuse to let these adventure concept go to waste.
Up, Up and Away,
AD
Barking Alien
Posted by Adam Dickstein at 8:56 AM 2 comments: