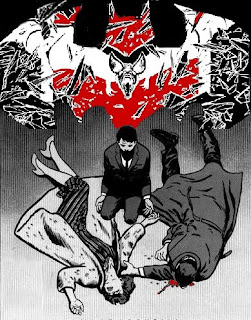 ...So our story continues as Tom, Paul and I, the only ones interested enough and brave enough to give this new game a try, prepare to play on the kitchen table over at Tom's house.

Tom handed out paper, pencils, and dice. As he did, he explained the game of Dungeons & Dragons in a bit more detail. He described the basic concepts of Attributes, To Hit rolls, Saving Throws, and all the other standard elements of D&D. After a short discussion of the rules he went on to describe the world.

At the ages of 7 and 8 none of us had any real experience with what 'medieval' was. Likewise, our exposure to fantasy literature of the sword and sorcery variety had been limited. I had read The Hobbit (I was very advanced for my age in reading and writing, while simultaneously monumentally terrible at math. Still am.) but not much else as far as wizards and dragons went. Luckily, we had read comic books featuring Conan and Warlord, seen animated films, and tv shows to help us get in the 'right' mind set.

My first character (ever for an RPG) was Gobo Pepperthorn, a Halfling who hailed from farmlands quite some distance from the Human Kingdoms. The adventure began when Gobbo was told to take a small box containing six bottles of the Pepperthorn family's secret recipe super-spicy hot sauce to The Human King. Apparently Gobo's father had gone to do that over a year ago and never returned.

I''ll never forget my first encounter, largely because it explains why I view things the way I do today.

Basically, I was walking on the road to the Human Lands when I entered a ghost town. Not a deserted medieval town since, as I said, we had no clue what the heck a medieval town looked like but instead what was essentially a Wild West ghost town, complete with horse troughs and a swinging door saloon. I mean seriously, to an 8 year old Adam an Errol Flynn Robin Hood movie and a Western are separated by one thing; guns hadn't been invented yet. Other than that its the same setting. Isn't it?

As Gobo explored the abandoned town he eventually discovered that everyone had died of some kind of illness. Soon, Skeletons were attacking him and I made haste for the saloon so I could get access to alcohol, broken glass bottles, and other impromptu weaponry.

Battling multiple opponents, running and jumping like a jack rabbit (which I just assumed heroic Halflings with a high Dexterity could do), young master Pepperthorn spilled numerous bottles of whiskey and wine. Gobo than lures most of the undead into the bar and proceeds to torch the place with a makeshift Molotov cocktail.

The flames are seen by Paul's Cleric, a Human from the largest Human kingdom, who was coming to the town to find out why his people had lost contact with them.

To be honest, in the 30 years since that game I've rarely had even close to that much fun playing D&D if I wasn't running it. If that sounds egotistical so be it. Why? Because so many D&D GMs seem caught up on the meaningless minutiae of weight allowance and weapon speed and all the other crap that makes me want to cast light into my own eyes. Rarely has any D&D referee I've encountered let me or anyone else leap off bannisters, flip over tables, or do any of the borderline comic book/kung fu movie craziness Tom let us do in that very first game.

Also, after the battle was over and Paul and I had defeated the last of the Skeletons...there was no treasure. We didn't get any, look for any, and didn't ask for any. Why? Superheroes don't do it for the gold. Captain Kirk never 'looted the bodies'. Why would we?

The party defeated evil creatures created by a cursed disease. Our job now was finding out where the curse came from and why it was made. In the weeks to follow we would learn of an evil Cleric out to take over the world with an undead army. We would save innocent lives and free the lost prince of the Elves who would than join our party (an additional player). We found out the Pepperthorn hot sauce has an unusual effect on humans, giving them super strength for sort periods. That was why the Human King wanted it and why Gobo's father was kidnapped by the evil Cleric.

It wasn't about treasure, gold, or even XP for us. It was about being heroes from Day 1.

To be concluded with Secret Origins - Part III...Coming Soon...


Posted by Adam Dickstein at 7:59 PM No comments: 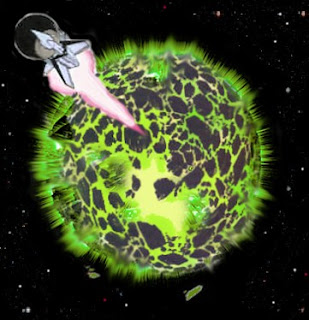 Our story begins on a surprisingly mild summer day in August of 1977. In fact, it was August 25th. The place, Brooklyn, New York. Oh, Earth Prime.

I was 8 years old and hanging out with my friends in front of my grade school. Summer camp had ended and the school semester had yet to begin so we all set out to have as much fun as possible in our limited window of freedom.

Even at the age of 8 there were cliques. A good sized group of the athletically inclined played handball against the wall on the school's shaded side. A few girls were talking and jumping on the opposite side of the area where I was seated. As for my closest friends and I, we sat on the stairs of the school's front entrance discussing the important issues of the day. Mainly, we talked about that new movie that had come out just before the summer, 'Star Wars', various TV shows, cartoons and of course, comic books.

I was a pretty popular kid back then. I had a lot of friends and many of them wanted to hear my ideas and opinions on stuff. See, I was already a geek and a geek was cooler than cool in those days. When you're 8 even the 'jocks' and the bullies read comics.

While building my arguement on why and how Superman could beat up Thor, a friend of mine approached the outside gate with a box of some sort in his hand. As he came toward us, many in the group, myself included, got up to meet him half way.

To say Tom Zizzo was my friend at that time is not quite accurate. He was a year younger than me and a grade below me and while I knew him I didn't know him well. He apparently knew my friend Paul though and so I figured if Paul was cool with him he must be an OK guy.

"It's a game. I got it for my birthday. It's called Dungeons & Dragons," replied Tom.

"Oh, I've heard of it," I said, even though I hadn't actually heard of it. I was the 'go-to-guy' for all things superhuman, supernatural and/or spacefaring. No way was I going to admit I didn't know anything about a game with 'Dragons' in it.

"It's really cool. My older brother taught me how to play. Anybody want to try it?", exclaimed Tom with a mix of enthusiasm and nervousness. It only made sense since he was asking older kids if they wanted to play a game where he, a younger kid, would have to show them how.

Tom than spoke the words that not only began my journey into the hobby of RPGs but would also forever color every game I would ever run.

"It's like playing out a comic book. You create a character, go on adventures, defeat villains and save people!" 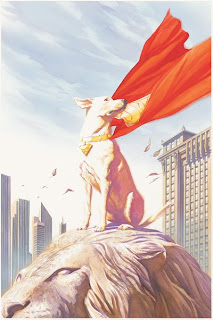 Barking Alien The Blog is about to go through a minor change in focus.

It has recently come to my attention that while I am nigh-obsessed with Star Trek and other Sci-Fi settings, one of the genres I GM best is Comic Book Super Heroes.

I've always been a big super hero fan and indeed it was comic books that got me into D&D in the first place (more on that in an upcoming post). Even before I first encountered RPGs I was creating and drawing my own comic books characters and making little comic books of my own with crayons and drawing paper.

With the release of the RPG ICONS by Steve Kenson, the DC Adventures RPG by Green Ronin (also Steve Kenson) and Mutants & Masterminds 3rd Edition (man that Kenson guy gets around), I've decided to focus a bit more on the supers genre and some game ideas for it that I've had in the past as well as new ones I've considering now.

Good Bye Frank...And Thanks for Everything 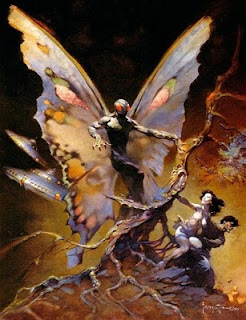 Frank Frazetta, arguably the master of American fantasy art for the better part of six decades has passed away at the age of 82. I would like you all to join me in appreciating the depth of skill and creativity this man had by rewarding yourself with an image search and taking time to stare in awe at some of his work.

Thanks Frank. We miss you already,

Posted by Adam Dickstein at 5:00 PM No comments:

Score One for Truth and Justice

Green Ronin getting the rights to produce an offical DC Comics RPG based on Mutants & Masterminds!