Things have been kind of hectic here at Casa Del Perro Verde, what with the economic hardships brought upon us by a global pandemic and general degradation of my mood due to an abundance of planet wide stupidity.
In the past seven days we have experienced the passing of Supreme Court Justice Ruth Bader Ginsburg, a major inspiration of my mother's and Ron Cobb, a major artistic inspiration of mine. The world seems to be getting decidedly less smart and cool as the month goes on.
Now, Google has finally gone and done it and changed the format of Blogger behind the scenes and it is, as Tim Knight of Heropress accurately assessed, absolutely garbage. Everything is worse about it. It is harder to understand how the blog is doing, harder to link things, your are redirected to a notice page anything you click a site on your reading list...just...everything about it was designed to frustrate the user. No clue what they were thinking. Likely they weren't.
All of these factors have sucked out my enthusiasm for blogging. Furthermore, I am running games and they are fun but truly inspiring. I have planned a whole series of posts based on my 'Pattern' post at the beginning of the month and now I just don't care to continue.
I think I may take the rest of the month off. Hopefully I will feel like putting up with Blogger's absolutely crappy new system next month.
Or not. We'll see.
AD
Barking Alien
Posted by Adam Dickstein at 8:58 PM 1 comment:

I am currently at an RPG crossroads, having finished (for now) two online campaigns I was running and having another one I was in as a player sort of peter out. As I've not yet started any new games to replace the completed ones, I am faced with the draw of my 'Gaming Pattern' as mentioned in my previous post.

This means I should be feeling the desire to run Star Trek and even getting some ideas for a campaign popping into my head.

Well, it just so happens I am. 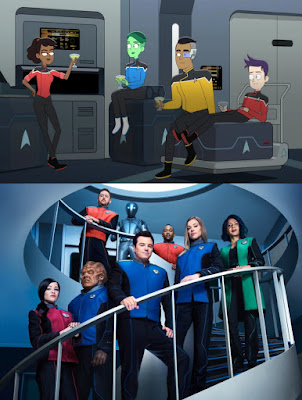 I keep coming back to this idea of running a campaign based on Star Trek, or perhaps the TV series 'The Orville', using Star Trek Adventures with the premise of a ship and crew focused on Second Contact, as described in the new Star Trek animated series Star Trek: Lower Decks.

Essentially the idea is that the PCs and their vessel are charged with the follow-up to the more glamorous job of First Contact; it's up to them to get an embassy or permanent research team set up, determine all the best places to eat, make sure all the documentation has the native species' name spelled correctly, and that sort of thing.

In addition to the somewhat tongue-in-cheek atmosphere that the overall campaign would have, there will be an attempt to get to know a planet and its people better than we usually do in an episode of Space Adventure Science Fiction television. We might spend a little more time with 'mundane' things like studying the world's weather, creature migrations, or particulars of the native culture(s).

To some extent this idea is one I've had for some time; seeking a way to treat a Starfleet (or Planetary Union Fleet) visit to an alien world more like one from the classic RPG Traveller (in fact I might get the chance to use ideas from Grand Census and The World Builder's Handbook).

Adding more Science Fiction to the baseline of Star Trek style adventure feels like it would need a touch of levity to balance it out and prevent it from potentially becoming dry. This is one of the reasons I like developing the game with a 'dramady' approach.

Also interesting to point out is the fact that I really miss running comedic games, something that my recent Red Dwarf / ALIEN RPG reminded me. That campaign went especially well and proved once again that combining serious Sci-Fi, quirky characters, and surreal, even absurd situations is an alchemy mixture that results in gaming gold.

Happy Star Trek Day to One and All across the universe! 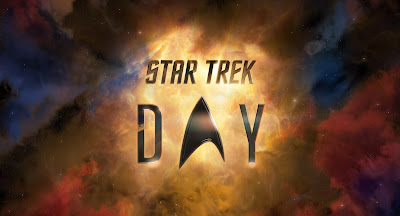 Posted by Adam Dickstein at 10:18 PM No comments:

Aren't all patterns recurring? Isn't the repeating of elements what makes a pattern a pattern?  Although I suppose a recurring pattern is when the pattern as a whole repeats.

See, I don't just over-analyze the semantics of other people's words. I do it to myself as well.

The point is, I recently noticed a pattern.

While I love to try out new games and often get inspired to run RPGs based on genres, settings, or IPs that I am newly introduced to - or even re-introduced to as the case maybe -  even I tend to fall back on a certain set of preferred games.

Sure I'll run a short campaign of Smurfs here or Space:1999 there, perhaps suddenly be inspired (as I have been of late) to run a one-shot of Aura Battler Dunbine, but I always swing back around to my favorites.

What I am seeing that surprises me is that these favorites often fall into a pattern of sorts. While not always exact and with a caveat or two (I often feel like running Star Trek after even a short length of time of not running it), I believe the pattern looks something like this:

Basically, I run a Star Trek game and at some point during it I get ideas for a Star Wars game. This lasts until I get one going or at the very least run a one-shot. In some cases, the one-shot is enough to fulfill my Star Wars craving, a least for a little while.

After running Star Wars I'll feel as if I've either done too much IP Science Fiction or not enough. If I decide there's been too much, I usually drift over to Superheroes, with Champions 4th Edition my mainstay. I may be attracted to another system or a particular setting, but Supers of some kind is going to be run.

On the other hand, if I am still very much in a Science Fiction mood I will want to run a Sci-Fi game very different from either Star Wars or Star Trek. This usually leads me to things like ALIEN, Red Dwarf, Lensman, or some other known space adventure universe.

Once I've run one of these, I inadvertently drift towards Fantasy, for even though I am not really a big fan of it, I can't keep but feel the tug of 'ya'know what I haven't looked at in a long time?'. If I previous ran Supers then I want my Fantasy a bit more grounded and generally start looking at Ars Magica. If the Supers I was running was more low key, maybe with a bit of a more modern influence, then I'll want something more High Fantasy like Wares Blade, with it's magical, giant robots.

If I went for more Sci-Fi, and an IP at that, my next game is likely to be my own universe of Aerth and The Winghorn Guard, a mix of High Fantasy and Superheroics. If not that then a period piece such as Pendragon or Bushido. Now say the licensed game or setting I chose was particularly heavy and dark, such as the Cyberpunk/Noir world of Blade Runner. Then I am going to want to go wild and do something crazy like the Japanese TRPG 'The Trouble With Aliens' (kind of a reverse Men In Black), Toon, Teenagers from Outer Space, Paranoia, Tales from The Floating Vagabond, Hunter Planet, a Muppets game, or what-have-you.

When the dust settles and the smokes clears, I will, as sure as the Sun rises in the East and sets in the West, return to Star Trek. It is my favorite setting to run and like my dog, it always welcomes me home.

Do you have a similar pattern? Share it with me.