Here it is, the 30th of September and I have made exactly four posts this month including this one.

Wow. I have reached a new level of suck. 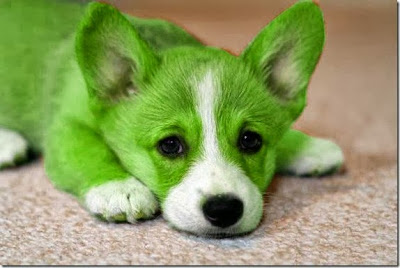 Never one to let a little thing like life get in the way of my RPG enjoyment, I can say that the things that have kept me away are beginning to settle down and my schedule is back to its normal level of abnormality.

That 'Yay' really can't be overstated. That is some serious 'Yay' action going on there. I started running Pendragon with my group and frankly 'Yay' is not going to cut it. 'Yay' gonna need some help. I am on the verge of 'Whoopie!'. Seriously. So close.

Traveller, oh man, I've got to tell you about Traveller. I have some ideas for updating the Muppets RPG too. Holy crikey! Did I tell you about my Star Trek game at the learning center where I work on Sundays? No? Dang. I've been thinking about Horror RPGs too, what with October upon us.

There is a lot to write about and hopefully, a lot for all of you to read and enjoy. Keep the comments and questions coming. If you want to send a gift or cash that's OK too. I am not here to judge.

Posted by Adam Dickstein at 10:52 PM No comments:

Better For Having Been Here


Taking a moment out of my buggered life to remember a life that made me feel good about life.


Happy 77th Birthday to Jim Henson.
He left us so much joy. I leave you with this. 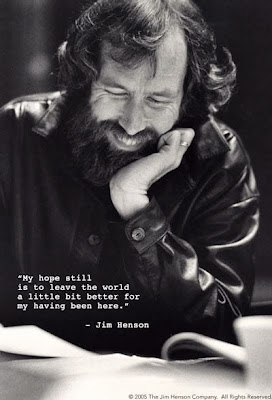 My brain is a bit of a mess of late.

I have a lot on my mind, both life-wise, game-wise and the one place they cross and it is making other things I want to do difficult to concentrate on.

For the purposes of this post and you readers out there, I am basically chasing three ravens... 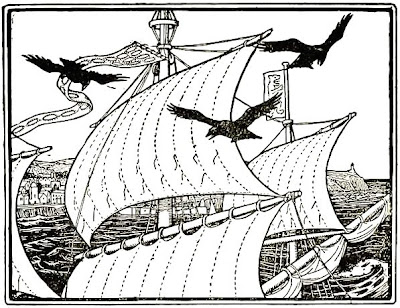 I am continuing to progress with my StoryTeller RPG, which is going through a few changes here and there. Overall it is essentially the same game that first came to me like a bolt from the blue, but as the shock from said bolt wears off, I am seeing ways of grounding myself a little more and realizing that the games does need more work than I first thought.

My second 'holy grail' of late (pun intended) is to finalize work on my upcoming Pendragon campaign before play starts at the end of the month.

For reasons both person and creative I seem to be having trouble reading through the entirety of the rulebook or even the key portions without getting tired or distracted. I am not sure if the material is too dryly written (because honestly I don't think it is) or if I still haven't gotten used to reading PDFs on a screen for extended periods but man, I just can't seem to get through the text in a timely fashion.

As I get older I find I have less and less patience for reading rules. This started sometime ago. When I was 16.

Anyway, I will get through it I know I will as I am really looking forward to this campaign. We have some PCs worked out already and, true to form for my guys, they aren't classical or traditional Arthurian characters but they are damn interesting. More about them in an upcoming post.


***
Lastly, but certainly not least, I am working on a new game to run with the kids at the study center I work at in Brooklyn. The students are older now and no longer newbies to gaming so I want to do something a little more challenging. In addition , we've done Fantasy, Superheroes and even a little Comedic Horror but so far, very little Science Fiction.

So my idea for this semester, beginning this coming weekend, is to run a deep space exploration mission where the PCs, working for either an interstellar government or a megacorporation, travel through the universe encountering alien species, discovering lost civilizations and cataloging unknown worlds.

Now, are we looking at Star Trek? Maaaybe. 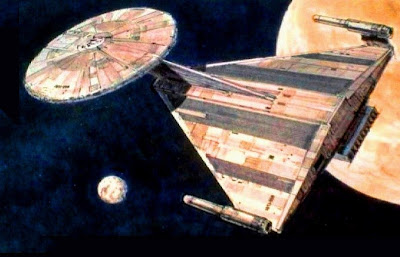 These kids are largely unfamiliar with the overall concept of Star Trek, which may prove to be awesome (and perfect for proving my 'You-Don't-Need-To-Know-Trek-To-Play-Trek').

Other options include doing it a bit more tongue-in-cheek and going with my homebrew Galaxy Quest, a bit more serious and have a realistic approach to space travel and investigation with InSpace (InSpectres variant) or even Traveller.

I'd love to hear peoples ideas and opinions on this. What simple, fast paced and relatively mechanically lite Sci-Fi game would work best for 1-2 hour session increments, with 6-8 players, ages 11-14?

Sometimes the love of your life is right there in front of you, staring you in the face the entire time and you don't even realize it.

Such it was with my new beloved and old, dear friend...

﻿
A melancholy need to run something of a fantasy nature has stayed with me from the dawn of late Summer onward until now, not one bit frightened off by the coming spectre of Autumn.
I have given it respect and indeed been rallied by it in the form of inspiration and activity toward my own little work of passion and vanity, 'The StoryTeller RPG'.
While progress on the StoryTeller continues, it has not satiated my hunger for a long term game I can run with my regular group.
I looked back at my posts for the month of August and I noticed something.
I listed only two commercial Fantasy RPGs that I've ever really liked and one of them I have never run. I played it some 25+ years ago but never ran it. I've run the other one, Ars Magica, to varying degrees of success (OK, mostly lots of success, one time recently mediocre success). So why try a campaign of one and not the other?
Why indeed?
﻿ 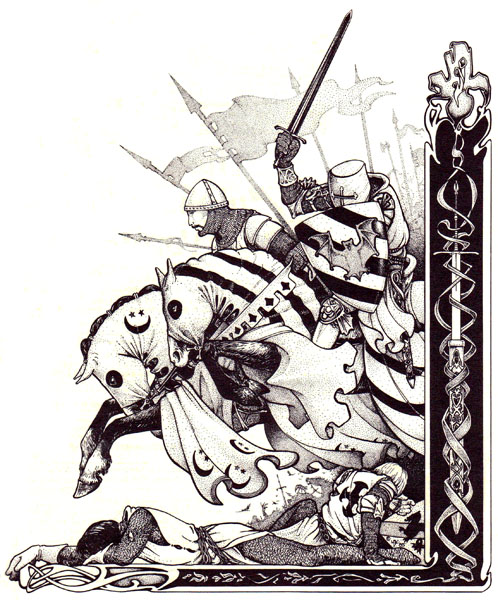 One of my favorite pieces of role playing game art ever.
By Lisa A. Free.
My thoughts are that with this game, which directly combines the concepts of actual medieval history with folklore and legend (for such is the very nature of its source material), I will have a better chance of evoking the kind of fantasy setting I am longing for while still giving my genre-challenged players the opportunity to battle enemy forces, slay monsters, hunt for ancient and possibly mystic treasures and gain wealth and notoriety, a major driving force for at least one member of the group.
For the majority of the players, the chance to do all of the above while exploring interesting characters is easily facilitated by the system and subject matter. The rules governing Passions and Traits will go along way toward helping one or two of them visualize their character beyond what skills they have and what weapon they use.
Most interestingly, its my now veterans who seem to have the most difficulty thinking outside the box when it comes to fantasy and genre-troupes in general, where as my newer players are pretty open-minded and flexible as they've had fewer years of D&D pounded into their heads. Well, two more new players maybe coming into the mix. This could get very, very interesting.
King Arthur as a Boy: "What's the best thing for being sad?"
Merlin: "The best thing for being sad is to learn something."
Camelot, The Broadway Musical, 1967

A brief acknowledgement and thank you to my newest followers. Hope you enjoy the site and be sure to tell your friends!