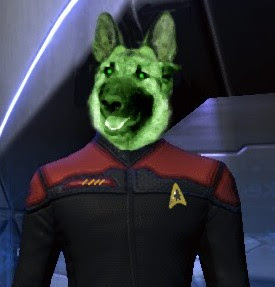 Holy Horta in a Headlock! I've got 30 followers! Better say something interesting...

Well, my computer is finally working close to normal and I owe it all to the ability/skill 'Jury Rig'. If you are running any sort of modern to futuristic milieu and you don't have this talent available to the Player Characters and NPCs of your game...fix that oversight but soon.

The timing couldn't be better either, for in addition to the artwork and related things I really need to do, the ultimate fanboy, time-wasting, keep-my-sanity-so-I-don't-freak-from-the-pressures-of-life computer game is about to land on good ol' Terra Firma. On February 2nd, 2010, we mere mortals are to behold the pinnacle of PC gaming cool. I speak of none other than Star Trek Online.

I was able to play through the open beta and found myself instantly drawn to it, less as a gamer and more as a Star Trek fan. I think fans of Trek that are not gamers by nature (I'm sure there are a fair number in that category) will find this game not only interesting from a story point of view and definitely visually intriguing but also incredibly easy to get into mechanically. Things are very intuitive and it actually helps if you know what a phaser is, what shields do or whether a quantum torpedo is better than a photon one. A good friend of mine had a tad more trouble getting used to the controls and functions because, while she is a better MMO player than I am, I am the bigger Trek fan. While this aspect of the game may not appeal to the hard core MMO fan, it definitely appeals to me.

In fact, I found the background story so interesting and the MMO so inspiring I switch gears and pulled the following magic rabbit out of my butt at the last second...

I decided to run a tabletop Star Trek RPG adventure set in the Star Trek Online universe. Star Trek Outbound - Online roughly follows the plot of the game with a few changes made to accommodate the fact that dice are involved and not all the players are familiar with the MMO. Also, I altered some of the visuals for consistency (in the MMO you can custom design your own uniform, I picked a uniform and made character portraits using the character designer.).

The game is not being run with my usual group but instead a bunch of other friends who were nice enough to show up when all I told them was, "I've got an idea for a new Sci-Fi campaign. Its a surprise!" The end result was awesome. We played for nearly eight hours and got to learn about Andorians with alternative lifestyles, catch up on paperwork, be playfully chided by our Vulcan Captain (a Vulcan with a dry sense of humor!), spy on Romulans, fight the Borg, loose our captain, save sixty fellow officers whose ship was virtually dead in space, destroy a Borg Cube and prepare ourselves to mount a boarding party to the downed Cube to retrieve our captain.

All in all its been a good week to be a Star Trek fan. Hopefully with a fully functioning computer and new campaigns for 2010, I'll have a lot more to ramble about.

Begun These Clone Wars Have 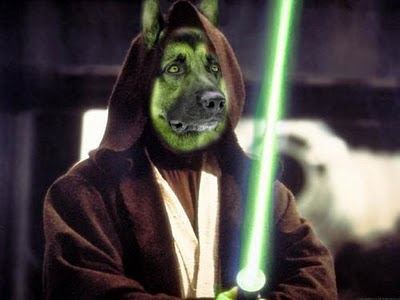 I've always been more of a Star Trek fan than a Star Wars one but I'd probably say that Star Wars holds a very special place in my heart, not just as a fan but as a gamer. I discovered Star Wars in the same year I discovered D&D and at the impressionable age of 8, both had a major impact on my hobbies and interests to this very day.

In addition, Star Wars is probably the game setting I've run the most after Star Trek. I'm a particularly big fan of the West End Games D6 Star Wars RPG. To me, very few systems hit that sweet spot between simplicity and complexity that I'm looking for (and continue to look for) in a Science Fiction/Space Opera/Pulp Adventure game. Star Wars did it with a mechanic and writing style that had all the magic of THX sound and killer special effects.

So yesterday, on the urging of some of the players in my Compleat Strategist group, I ran the first session of a new Star Wars D6 campaign. I think the last time I ran Star Wars was shortly after the third Prequel film, so that had to be sometime in 2005. After so much time I was afraid I might take a while to hit my stride but the exact opposite was true. I think that yesterday I got back the spark that I've felt was missing from my games over the last year or so. Some time in the late nineties a friend of mine said, "Star Trek might be your favorite but you're just really good at Star Wars." I think she was right.

The game went over incredibly well if the yelling, laughing, whoopin' and hollerin' was any indication. Also, if a good portion of the noise and enthusiasm is coming from the one guy whose PC died than I call that a major success.

Yep, we had a casualty in the first session, a rarity for me in Star Wars or any other game I run for that matter. PC death is not common in most of my campaigns. Injury and lose of limb to be sure but the death of PCs is rare and, like life, usually the result of idiocy or accident. This was a tad of both but far more related to the latter. I will state for the record that everyone did the best they could and no one really messed. It was a couple bad choices and being in the wrong place at the wrong time. Furthermore, the PC who perished, in a last ditch effort to reduce the damage, ended up saving another PC's life. Numerous allied NPCs were not so lucky.

I won't go into details here but suffice to say...a PC in a starfighter attacks an enemy cruiser which has a huge particle beam cannon capable of targeting the planet below. Some PCs are on said planet. He makes some amazing rolls and basically shoves two proton torpedoes up the cannon's nose cone, causing an explosion so powerful as to blow up the cannon's generator. Problem? Several PCs have boarded said ship and two are in the generator/cannon room.

Currently those of the planet's surface are safe, there are three surviving PCs and one NPC on board the horrifically damaged enemy ship and the pilot PC is adrift in space as the backlash from the explosion damaged his ship badly. Of the three PCs are the enemy ship, one is very, very badly injured.

More to come, May the Force Be With You, 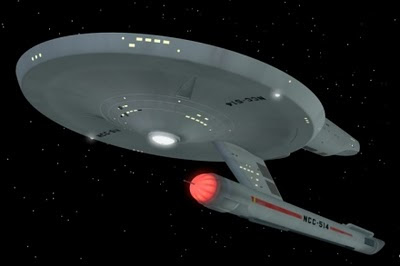 After a lot of thought, some soul searching and inspiration from a post on Jeff's Gameblog, I have decided to focus a good deal of my gaming efforts towards a new campaign for 2010...

This new Star Trek RPG campaign, using the Last Unicorn Games ICON System, will be set during the Original Series and begin aboard an Avery Class Survey Ship (a TOS-Era style version of the USS Kelvin seen in the JJ Abrams Star Trek movie - as seen in the above image). This version of the Kelvin was designed by the very talented Kenneth Thomson Jr.

I intend to start there and if the PCs do well and progress I will upgrade them to a more powerful class of ship (something I've down in previous campaigns that works well). Depending on the exact time and nature of the setting they may keep the ship for a while and get upgraded to the Motion Picture Era look but we'll see what happens.

The region of space being explored is known as 'The Breach', an area surrounded by a Mutara Class Nebula that has, prior to the opening of the campaign, prevented extended exploration of this sector. Recent upgrades to Starfleet Shields and power systems now make it possible to handle this particular anomaly for limited periods of time (for those Star Trek fans wondering or worried about continuity, the nebula surrounding the Breach has less powerful effects than those of the Mutara Nebula in Star Trek II: The Wrath of Khan).

Well, I'd better get cracking. I'm still planning on running Star Wars, Ghostbusters and my Psycho-Vaguely-AD&D-meets-Anime-Fantasy games once a month each.

Its gonna be a good year.