You may have noticed I am a little behind in producing entries for the A-To-Z Challenge. You would, in point of fact, be incorrect.

I am very behind. Extremely so. Monumentally would be an accurate assessment of how behind I am. Going to try to finish anyway.

Besides, the next few rock.

E is for Ever Rimward

Actually, Ever Rimward is the name I have given to a particular Star Wars universe continuity. It is actually made up of three separate campaigns that I eventually linked up together.

The first campaign, entitled "Tales from The Rim", though sometimes called "Tales Rimward",  was started in 92' I believe. I forget what prompted it, but it lasted roughly a year and was extremely popular among my gaming group at the time. It is still remembered fondly by those who participated.

The second was very short lived. I had created it on the fly at GenCon in 93' or 94' on the day we were getting ready to head home.

I had attended GenCon that year with a large group of friends from the New York and New Jersey area, including the earliest incarnation of what I sometimes call 'The Jersey Group'. One member of the group, my late friend Martin, had been convinced to come even though he had only one experience with RPG campaigning thus far and it has been a generally negative one.

Martin enjoyed himself at GenCon but really didn't get to play any great games. He was walking that fine line between being interested in gaming and thinking it wasn't for him. Hoping to sway him to the Light Side, I threw together an impromptu game of Star Wars D6.

After an hour or so of gaming, and an 18 hour drive back to NJ, the first question on everyone's lips was, "So Adam, when are we continuing that Star Wars game?"

Continue it I did, but after four or five sessions, the game was becoming unmanageable because, quite frankly, I never expected it to go beyond an hour at GenCon. It wasn't designed to keep going.

I sat the Players down the next time we got together and explained this to them. I also told them that if they wanted, I would actually create a serious Star Wars campaign for them. Everyone agreed that this was the best approach and I followed up with one of the best campaigns I've ever run.

Lasting roughly twelve monthly sessions, this campaign, "Star Wars: Ever The Brave" - aka 'Star Wars The Animated Series', since many of the players imagined it felt like a Japanese Anime show - goes down in history as easily one of the top 10 campaigns I've ever run or been a part of.

A week before Star Wars - Episode I: The Phantom Menace came out in the theatres, I assembled the Players of both groups (as many as I could), plus a few new additions, and ran an 8 hour adventure where the two teams met and faced off against an old enemy (from both campaign 1 and 3), on a familiar planet (to those in campaign 3), which ended by revealing the origin of one of the character from back in campaign 2. In addition, the main villain of campaign 1 ended up being their ally as he had a past grudge against the villain in campaigns 1 and 3. Whew. 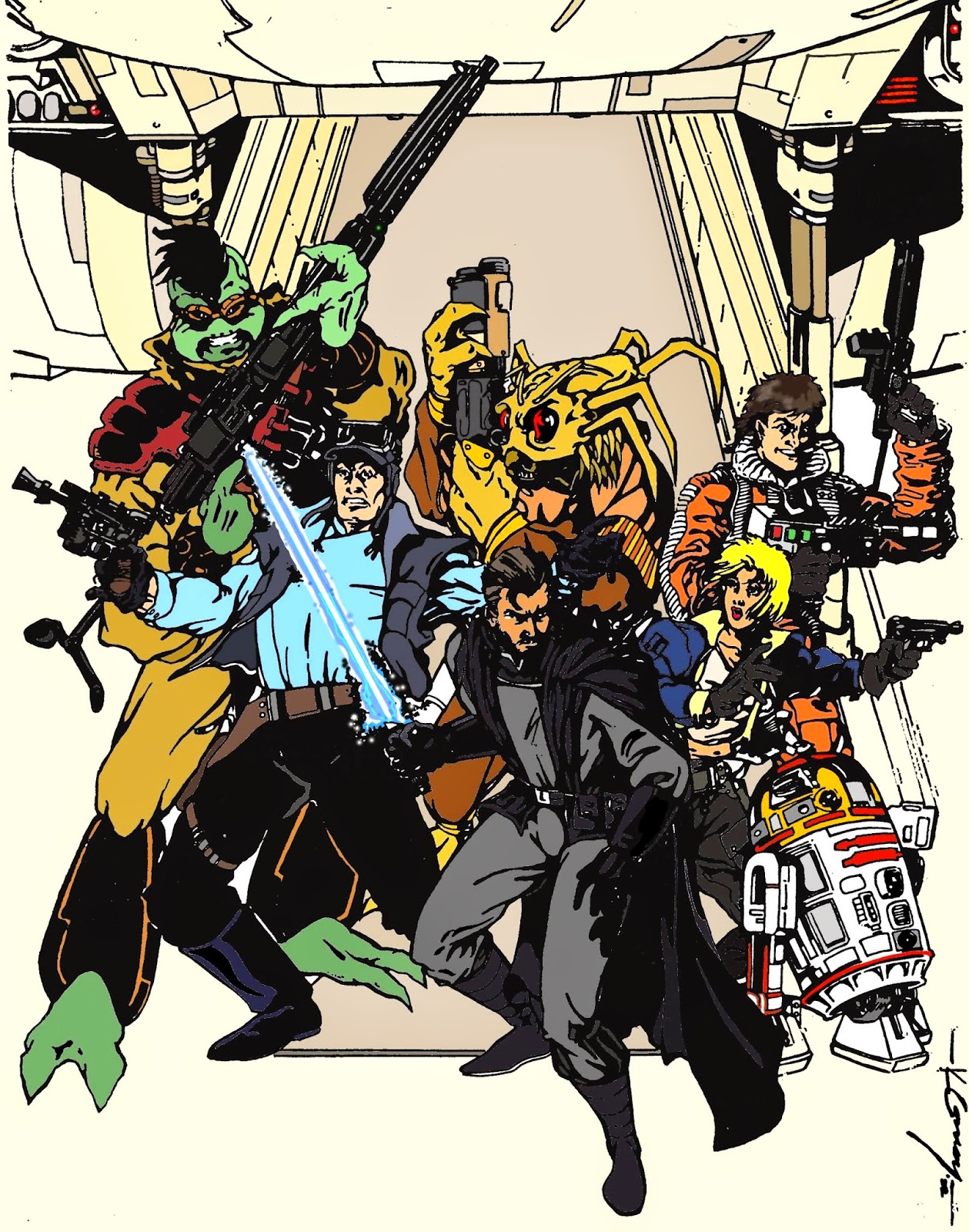 The cast of Star Wars: Tales from The Rim
Left to right, starting from the rear -
Back row: Phay-Rec-Seket-Tepth, a Bounty Hunter of the frog-like Tepth Species, Waphqui, a Nimbachi Pirate and Carlacc 'Junior' Acen, Brash Pilot
Middle row: Jeard'en Kaine, a Smuggler and his NPC girlfriend and mechanic, Naena Moonrift
(Along with R2-D6)
Front row: Drake Madamus, Vigilante Jedi

Circa: I believe the dates were 1992 to 93 for the first campaign, 93 or 94 for the second mini-campaign and 94 to 95 for the third campaign. Additional adventures featuring the same continuity and characters were run in 99 and 2002.

Player Base: The first campaign featured five guys, ages 21-24. The second and third campaigns featured about seven players, four men and three women, ages 23-29. The later adventures featured a group consisting of a mix of the first two plus other men and women in those age ranges. Ethnicities were very diverse.

Group #1 from Tales from the Rim are pictured above.

Group #2 consisted of an Assassin Droid, a Tusken Raider/Sand Person, a Pho-Pheahian Engineer, a Smuggler and a Mercenary.

Group #3 had a Smuggler, a Repair Droid trying to improve it's own design to the point where it became a nearly Human android, a Mad Scientist, a Vhaspear (Original alien species) Medical Doctor/Scientist, a Brash Pilot, a Twi'Lek Dancer/Assassin and a Young Jedi.

Synopsis: OK, let's see if this can be conveyed in a way that makes sense and gives you some idea of how awesome these games were.


Tales From The Rim focused on the Star Wars universe's Outer Rim Territories three years after Return of the Jedi. Remnants of the Imperial Empire controlled some of the systems rimward of the New Republic and had recently captured members of a terrorist cell posing as a religious group called the Ho-Ken-Tota.

Unfortunately, their intel was bad and they captured the wrong people. The PCs all meet as prisoners onboard an old Victory-Class Star Destroyer (an older design than the one in the films), currently on course to drop them off at a penal colony. During the trip, the Star Destroyer is attacked by zealot members of the real Ho-Ken-Tota. The PCs must survive the attack and escape the ship, which is damaged and out of control.

Sometime after reaching relative safety on Tatooine, each PC reveals a bit of their background to the others and they decide to team up, as some of their background elements overlap. Before long, they are a band of brothers, and one sister (NPC) seeking to destroy the evil, Sith Inquisitor Prakken Drol and the mysterious Sith lord, Darth Galos.

In the final battle against the Imperial forces and their allies and the PCs, Prakken Drol's command ship is destroyed, instantly killing his second in command, Admiral Moloff, and likely killing Drol as well. Darth Galos escapes. One of the PCs sacrifices himself to destroy the enemy vessel and the shipyard facility he is using as a base. 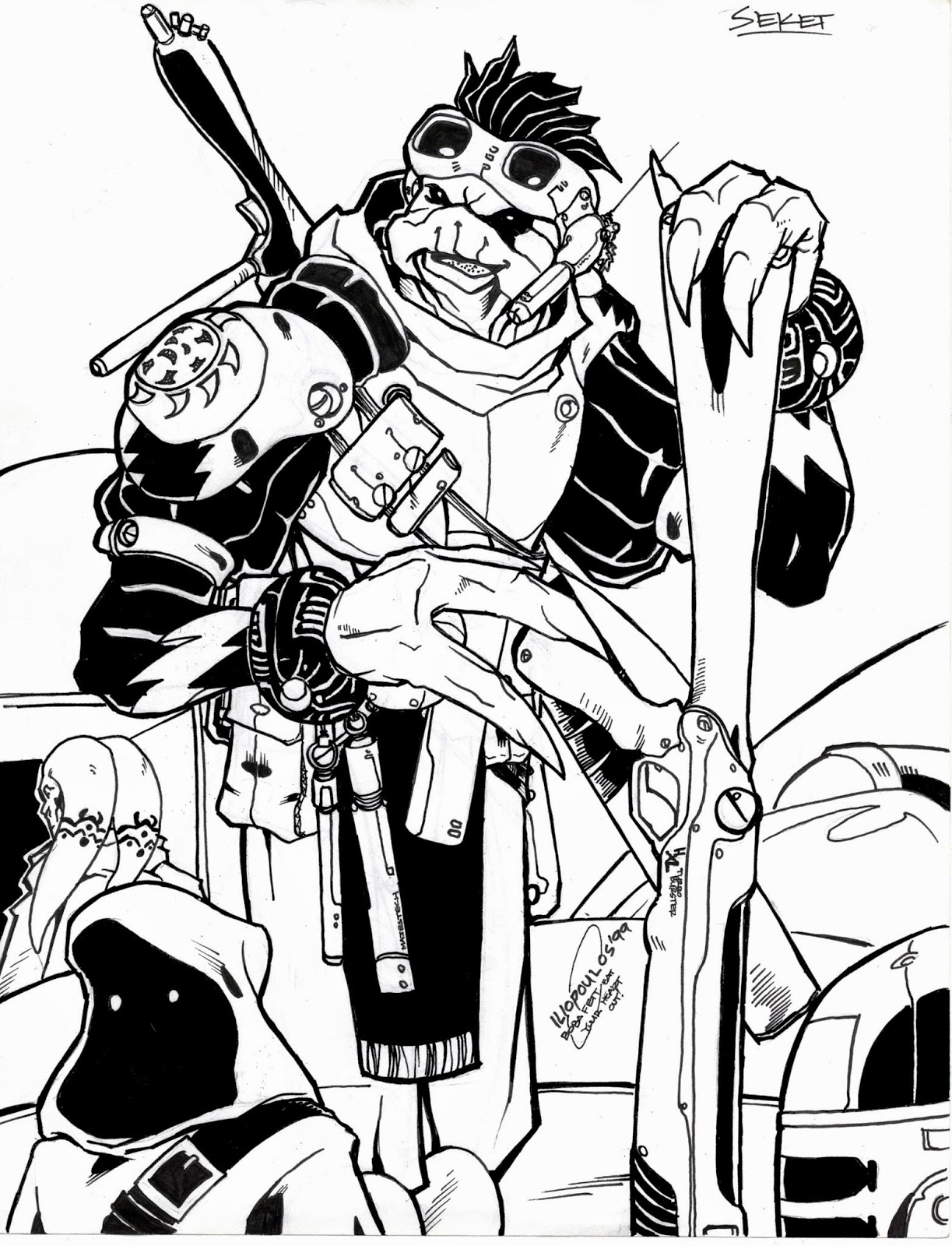 
The mini campaign was set at an unknown point in the Star Wars saga. It revolved around a mysterious escape pod crashing in the Tatooine desert known as the Dune Sea. An Assassin Droid painted metallic red emerges and encounters a large predator which is quickly dispatches. Having witnessed the event is a Sand Person named Fa'Hee. The Tusken Raider saw the pod crash and the droid's handiwork and believes him to be both a friend and 'The Red Metal Spirit of Death'. The two journey together to the nearest city, as the Red Metal Spirit of Death has told Fa'Hee he must return to the night sky where 'A Great Spirits War' is happening even as they speak.

The ruse doesn't fool the other PCs but they decide to humor the two nutcases as the droid actually has some money to pay them to help him return to space.

We kind of ended it there.


Ever The Brave takes place during the original trilogy. A number of the different people from very different walks of life (the PCs) all know a fellow named Tiree Palmight. Suddenly, Palmight disappears leaving clues as to where he might have gone. The PCs pursue the leads, run into each other and find themselves on the run from bounty hunters and Imperial agents looking for Palmight. They also discover some oddities in their relationships with and descriptions of their missing friend. Some describe him as an older fellow, a wise man, a scientist and a mentor. Some say he was a scoundral and a rogue but with a heart of gold. Two women seem to describe a much younger man, a rebel, a visionary and a lover. Who is the real Tiree Palmight?

It turns out that Tiree Palmight was Jedi, made a Knight just prior to the rise of the Empire. He was hunted down by Darth Vader's lackey, a force sensitive Inquisitor by the name of Prakken Drol (This is tied into the Tales From The Rim campaign. Drol killed the father of Drake Madamus, that groups resident Jedi.). Palmight crashed on the planet Kolindoor, the site of an ancient force using splinter culture. His ship was transporting parts and equipment for the clone banks used during the Clone Wars. By combining this equipment with some of the old Kolindoor technology, Palmight was able to clone himself (it was never clear how many times).

The small team of Palmights made survival on the barren world a little easier. While on this planet, Tiree communed with his other selves and had a prophetic vision. Eventually, the lot of them were rescued by Tiree's half-brother, Tiron Gold, and the group went about trying to prevent the tragedy that Palmight perceived in his vision. To this end he and his clones manipulated the PCs into various situations that would eventually lead them to find each other and join forces to defeat Drol and his allies.

In their final battle: The female Young Jedi kills Prakken Drol's Twi'Lek apprentice and adds in the defense of Endor. The alien Physican, Dr. Bospero, escapes to Sullust with radical healing technology based on the Kolindoor/Cloning devices and techniques. The Brash Pilot, adopted as a daughter by Tiron Gold, takes out one of the Star Destroyers at the Battle of Endor as the power of the Force awakens within her. Our Twi'Lek Dancer and Mad Scientist board the second Death Star, steal some key information and than attempt to escape together but are separated. She makes it safetly to Sullust but the Scientist is lost. The Smuggler and his all too Human Droid somehow merge, enter an escape pod, and are blasted into deep space in the wrong direction...

The Mad Scientist eventually crashes on Tatooine and loses his memory. Dr. Gustal Frahkeen is found by Sand People who called him Fa'Hee. Some months later, the second pod crashes containing the merged Smuggler/Droid biomechanical construct, who is mistaken for an Assassin Droid by many and as 'The Red Metal Spirit of Death' by his former ally.

I say 'Come to the Light Side' when most people say Dark Side. Why would I want you to be hateful, scared and sad?

Tiree Palmight is an NPC in a sample adventure from the very first Star Wars RPG corebook by West End Games. I took a liking to the name.

Prakken Drol killed Drake Madamus' father Indego Madamus and downed Tiree Palmight. He had tonfa-like light sabres, personal body armor and a force field similar to the Droideka. This was long before the prequels however (all these games were).

Red Ribbon is a reference to Dragonball Z.

The name of the Smuggler's ship in Campaign #1 is originally 'The False Profit'. He gains a device that can give false transponder code readings and created the following additional identities: The Centurion Turtle, the Good Fortune, Ill Wind and the Star Spray.

The look of Drake Madamus, anti-Imperial Vigilante Jedi, is based on Batman.

The Ho-Ken-Tota is mentioned in the Art of Return of the Jedi book. Markings on Jabba's Sand Skiff are attributed to them.

Special thanks to Keith Conroy and Aris Iliopoulos for the artwork.

May The Force Be With You.