Aside from Star Trek, this may well be my all time favorite game. Maybe. 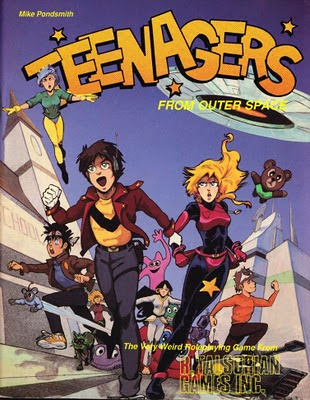 
Created by the maverick game inventor extraordinaire Mike Pondsmith and first published in 1987 by R. Talsorian Games, Teenagers from Outer Space was the first commerically popular non-mecha game based on Japanese anime. Of course, the mecha game actually based on giant robot anime was Mekton, also by Pondsmith.

As I mentioned before in the post on Mekton, I was a fan of Anime and Manga long before it was well known in the U.S.. This meant that I was adding Anime bits to my other RPG campaigns (such as D&D, Traveller, Villains & Vigilantes, Star Trek, etc.) in the form of more cinematic combat, background pathos, crazy visual descriptions of characters, creatures, machines and the like when Mekton and TFOS rolled in and said, "Hi! Were you looking for us?" The answer was a resounding yes.

It helped a lot that the rules are super simple, the premise super flexible and the rulebook written in a humorous, "Don't take this too seriously" style that is not only perfect for the genre but also a hoot to read.

Now speaking of 'the genre', what exactly is the genre of Teenagers from Outer Space?

Well, Anime and Manga are not genres in and of themselves but rather mediums with a particular style that can be used to tell stories in a variety of genres. The basic premise of TFOS in a nutshell is aliens make contact with Earth and after a while their children enroll in our schools, hang out in our malls and discover dating, pizza and rock n' roll. The universe is forever changed. The genre is a mix of Science Fiction/Space Opera, Slapstick Action Adventure and Romantic Comedy. Its a mix that is encountered fairly often in Japan (Tenchi Muyo, Birdy the Mighty, Dirty Pair) but much less so in the U.S. (though European comics seem to get it pretty well).

I've used the game for Western Superheroes, Medieval Fantasy, straight up Space Opera and a host of other things, though usually also adding a dose of comedy. 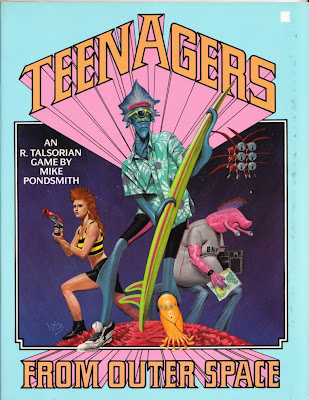 The system is your basic Stat + Skill Rank + Die Roll familiar to most D20 fans. The 'Interlock System' was extremely influential to game design of the era and the following years, obviously all the way to the design of 3rd Edition D&D. Unfortunately, Mekton and Cyberpunk used a D10 but Teenagers used a D6 for some reason. I switched TFOS to D10 right away, making the three games much more compatible.

Another adjustment I made was to give the Special Powers and Abilites ranks similar to skills. The idea was simply to not have everyone with Superspeed be the same speed for example. Player Characters in my house rules all start with 10 points and can either roll randomly or assign points to the powers they want. For example, my friend Dave's character 'Blitz' had Superspeed 10, while Pete's teenage cyborg had Superstrength 3, Invulnerability 3 and Micro Missiles (Zap) 4. We also added a lot of new powers and abilities. 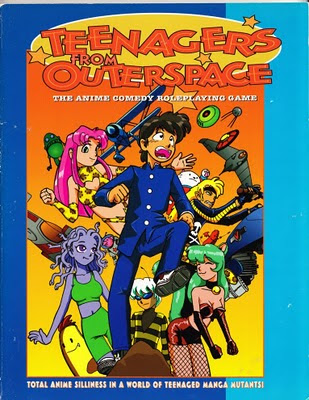 I've run at least two or three long term campaigns using the game's default premise, modified by settings of my own creation. The most successful was a game I ran in high school entitled 'Blast City Blues' in which alien refugees escaping a deadly enemy come to Earth with a warning and an offer. The warning is that the menace of three galaxies is hot on their heels and the offer is to give the Earthlings super powers and advanced technology to fight off the coming invaders. The offer is excepted but the menace never arrives. Now, 20 years later, the refugee ship is an island city that houses a school for the superpowered offspring of Earth's original volunteer protectors.

Going to leave it there for now but I'm sure I'll be coming back to this subject again in the future. The products of R. Talsorian Games had a pretty profound effect on me and my gaming style. I can easily see analyzing and discussing them further.