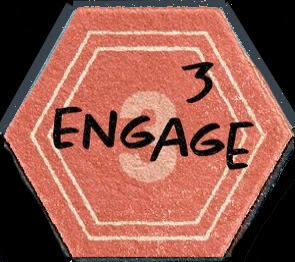 Engage? Did someone say Engage?


What are we Engaging? Well, it's an RPG event so obviously we're Engaging with games but, hmmm, that seems too simple.

I'd say what we're really Engaging with when it comes to RPGs is each other.

I've said it before and it bears repeating - Role Playing Games are (for the most part) a team sport.

I don't know how to break it to you so I'll just come out and say it...the game isn't about you. Don't worry, it isn't about me either. It's about us, the 'party', the group, going through a world or universe created by one of us, who is acting as the GM. It's symbiotic.

The player needs the other players to accomplish the goal of having a good time at tonight's session. Your PC needs the other PCs to complete the in-game goal of solving the current mystery or defeating the current villain. You all need the Gamemaster to describe what you see and encounter and the GM needs players who are going to encounter things and explore the setting they've developed.


The key to truly Engaging in a game with your friends is awareness.

Imagine you are seated at a table with five other Human beings. A Gamemaster is talking to one of these people about something that involves them, though more specifically, their character. Why should you or any of the other four people give a damn. Furthermore, what should you be doing or thinking about at this time - the time not about you and your character that is.

Well the default might be to read over your character sheet, play with you cell phone, check your email, look up the abilities you want next in the rulebook; there is so much you can do for you about you!

Try...not doing that. Instead, cheering your friend on, ooh and aah at the creature the GM presented, look up stuff they need to clarify so they don't have to, etc. Before you know it, it'll be your turn.

By Engaging with the other people at the session with you, by realizing you are all in this symbiotic relationship of creating a fun time together, you improve the outcome of not only this endeavor but all going forward with this group.

Some (hopefully) helpful do's and don't's for Engaging with the game and its various participants:

The best way IMHO to Engage with a game and those involved in it is to be aware of everything that makes a game work. This awareness and a little effort will go a long way.

You'll be surprised how much your players and referee will invest and Engage in the game when they feel like everyone is putting in the same effort to be there, with each other, as components of the whole.