My fondness for this next character is deep. He is a combination of many things I truly love, such as Science Fiction, Comedy, and the Warner Brothers Cartoons of Fritz Freleng, Chuck Jones, and many others throughout the 1950s and 60s.

The main thing that makes BLEEP-THE SPACE GUARDIAN special however, is that he is second fiddle in his own campaign. 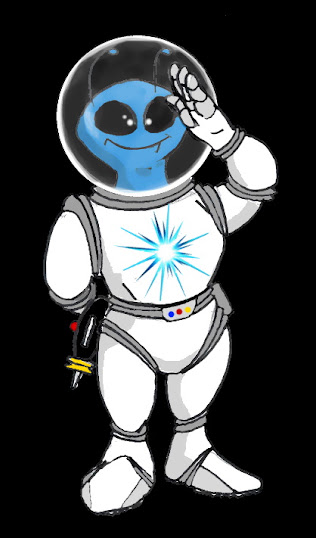 Player: Adam Dickstein
System: Toon
Campaign: The Adventures of BLEEP - THE SPACE GUARDIAN!
Gamemaster: Adam Dickstein
Circa: 1986-1987
Origins: BLEEP was inspired by a number of things including my general love of Science Fiction, Comedy, Cartoons, and a newspaper comic strip by Bruce Drummond called Orbit. It wasn't the greatest strip but I really loved the art style and Orbit's design.
Backstory: Very little of BLEEP - THE SPACE GUARDIAN's 'backstory' is revealed in the campaign. All we know is that he is one of an unknown number of other 'Space Guardians', each protecting their Space Sector from evil (much like the DC Comics Green Lantern Corps).
One interesting element of the campaign is a subversion of the classic Space Patrol troupe in that many planets don't recognize the authority or jurisdiction of the Space Guardians. They appointed themselves the protectors of various regions of space but who asked them to? On what authority do they come down to your planet and arrest a criminal? Many worlds do appreciate their help but then they're like, "Thanks. We'll take it from here."
BLEEP - THE SPACE GUARDIAN is comically earnest, overly enthusiastic about being a heroic do-gooder, and so honorable and forthright he is often clueless about things like stealth, trickery, and subterfuge of any kind. This isn't the case with other Space Guardians who come off as more jaded and professional.
BLEEP lives in a oddly shaped spaceship in orbit of the Earth (more on this later) with the true hero of the campaign, his 'sidekick' Cha-Wump. Cha-Wump is a purple, cube-shaped, alien eating machine resembling a sponge crossed with a marshmallow. .
You see, the main player in the campaign was my good friend, the late Pete Hernandez, who played Cha-Wump. Other players would pop in and out as guest stars - usually villains but occasionally other Space Guardians, Earth Military Officers, UN Ambassadors, etc. - with myself as Gamemaster and the titular BLEEP - THE SPACE GUARDIAN. Usually BLEEP is shown as being in over his head and it is Cha-Wump who saves the day, though more often than not BLEEP still got the credit. 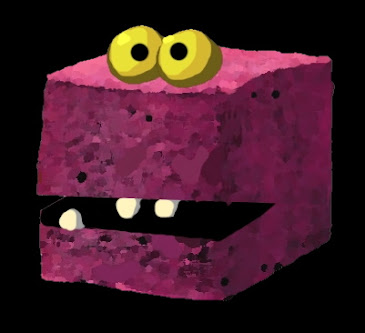 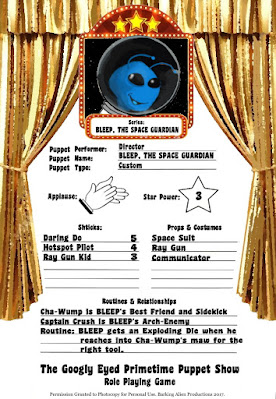 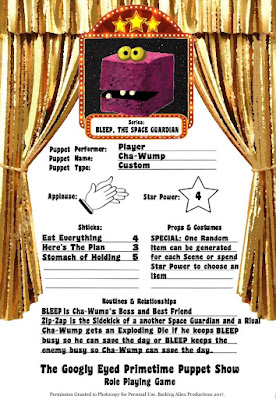 BLEEP's Ray Gun was known as the Zap-alizer and had three settings - Zap, which did damage - Heat Beam, which was used to weld, start a campfire, etc. - and Kinetic Beam, which could push people and objects away or pull them towards the pistol shaped weapon.
At one point I had a random list of items in Cha-Wump's mouth and if Pete failed his 'Stomach of Holding' roll he would get on by rolling D66, a range from 11 to 66. I periodically switched out the list for alternative ones, later changed that mechanic, and then brought it back again.
BLEEP's spaceship deserves special mention, though sadly I can not recall the name of it. The exterior for it was a mix of retro-50s/60s Sci-Fi shapes and a modern, mid-80s big budget film. Basically a Buck Rogers Rocketship but illustrated by a concept artist for the Star Wars films. The ship's interior was very homey, with that Sci-Fi RV feel you find in the Millennium Falcon and The Mandalorian's Razor Crest. It was equipped with Force Fields, two Zap Cannons identical in function to BLEEP's Ray Gun, and could travel at Hyper-Zoom Velocities! Whatever that means.
Next Up, when the going gets tough, the tough start purring! Meet a Feline Femme Fatale you mugs are going to go gaga for! After all, she's THE CAT'S MEOW...
AD
Barking Alien
Posted by Adam Dickstein at 3:18 PM