This next character entry is going to be a long one and that's as it should be. The character is, without a doubt, one of my all time favorites you will see this month and holds the special distinction of being created and played by one my favorite people in the world. This is the first character created by my ex-wife and dear friend Selina.

In addition to being an amazing character, full of depth, nuance, flaws, courage, and drive, she was the catalyst for bringing back my world of Aerth and the revision of The Winghorn Guard concept after a nearly 20+ year hiatus. 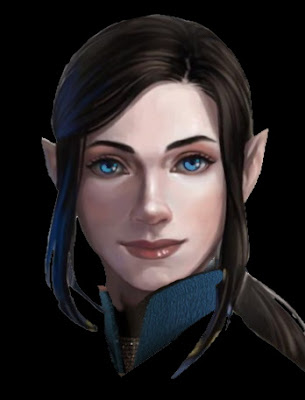 Ceren-Dee's last name is actually Windrake, although it is said Wind-Drake. In subsequent Winghorn Guard campaigns this confused some people, especially those playing Elves, so I started spelling it WindDrake.

(Selina just informed me that, "Since Winddragon and Winddrake would have had the 2 D’s in their names, both of them dropped one D. It was just aesthetically more pleasing to read/write.") 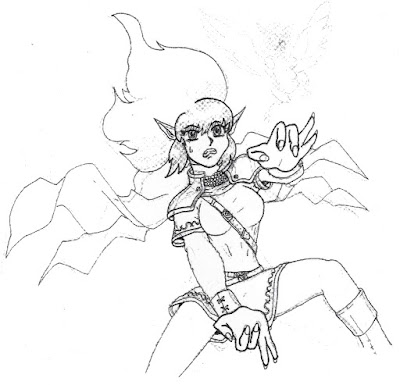 An old sketch I did of Ceren-Dee Windrake from the late 90s.
I was deeply in my Anime/Manga phase.
Overview: It is very difficult to narrow down an overview of two years of gaming nearly every evening. Selina and I lived together before eventually getting married and we'd play a few hours each night (practically) before bed. The Ceren-Dee campaign was really just her as the player and myself as GM and the rest of the universe. I learned so much about NPC and story development as a result and it vastly improved my games from that point forward.
It help immensely that she, Selina, loved her character and the game. She was all in in a way that I don't see people immersing these days. When Selina started to play with my other groups, especially my ol' NJ gang, she brought that energy with her into a band of players that also all had that energy. It made for an incredible experience.
Back to Ceren-Dee; she would eventually develop a strong bond and then a romantic relationship with the brooding, driven Sylvan Elf Shaylan Everleaf. Towards the end of the campaign and into the next one, Shaylan and Ceren-Dee would marry and establish the port city of Everwind, also a Winghorn Guard outpost.
Other strong relationships were forged between Ceren-Dee and the Half-Ogre Vek-Tan, the Ranger-Cleric power couple Gestral Ronamoore and Promelia, and the Half-Elven bad boy and love interest of her friend Thundercall, Dalor EverBurnGreen. We spent as many sessions visiting the various homelands and families of the characters, shopping in markets and favored stores, and exploring the world as we did fighting evil villains, battling monsters and unraveling ancient mysteries.
Of particular note when it comes to relationships and villains is Ceren-Dee's dealings with the campaigns arch-nemesis Shadowhaunt. The last of the Pale Elves of Eldrindel (or so it was believed), Shadowhaunt went from pure evil to tragic and in the end he sacrificed himself to hinder an even greater threat than himself, one he partially helped create. He only did so after being moved by words from Ceren-Dee asking if this was his people's legacy. Is that what the Pale Elves will always be known for? Death and tyranny? He could not bare it and turned on the Dragons who'd pretended to be his allies just to steal his power. With his last, dying action and the combined forces of Winghorn Guard the Dragons were defeated and peace restored.
For a time...
Highlights:
Another character with so many great moments and stories . Let's see...
Prior to Ceren-Dee Windrake, the Elves of Aerth had never taken center stage. With a campaign focused around one I decided I had to flesh them out. With Selina's help I designed their cultures, history, and created what I think might be Aerth's best feature.
Ceren-Dee and two other Winghorn Guard members are at one point swept up in a massive wave while one a ship at sea heading to meet the rest of her group and wary that the villainous Shadowhaunt was after them. She and her companions arrive in the future, one where her romantic interest, Shaylan Everleaf, has gone full-on Dark Knight against Shadowhaunt and his allies, hunting them down and making them pay dearly. He nearly destroyed the Dwarven city of Throal because one of Shadowhaunt's agents was said to be hiding there. The grief and anger of losing Ceren-Dee had driven him quiet over the edge it seemed. Luckily, the time displaced Ceren-Dee was able to talk him down and a tearful conversation followed that was one of the best moments I've ever had in a game. Ceren-Dee and friends were returned to their proper place in the timeline and sharing her experience gave them all a new found view of their places in the world and in each others' lives.
A story arc I really loved involved Shadowhaunt assembling a team of villainous allies made up of either old villains from the original Winghorn Guard game or ones connected to them. To defeat them, Ceren-Dee tracked down the Guard members who had defeated these villains in the past. This resulted in the return of Arigon, Telerie, Rao Sunbird, and others from the previous Winghorn Guard campaign. Some just made cameos, some had short guest appearances, and some hung around for a season or two or had periodic reoccurring roles.
Legacy: Ceren-Dee's campaign ended with her marrying Shaylan Everleaf, establishing the port city of Everwind and having three children; the youngest of whom, Galefyn EverFae, became her PC in a follow up campaign.
Ceren-Dee has since appeared in never every incarnation of the Winghorn Guard or Aerth I have run since. Sometimes a major NPC, sometimes a background character, and sometimes just a legend the PCs hear about in passing.
Trust me, for as long as I am in this hobby and I run some version of Aerth, the name Ceren-Dee Windrake will never, ever fade.
Game Info: You are in luck! The Chronicles of The Winghorn Guard are well kept. Lo and behold, Ceren-Dee Windrake's original character sheet: 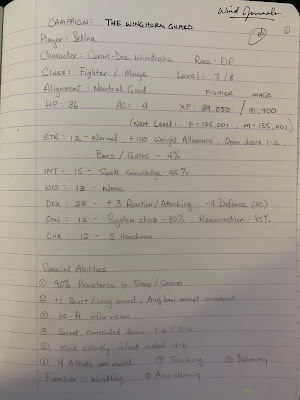 Bonus Feautres:
I almost forgot to mention Ceren-Dee's familiar, a Tressym (Cat with Feather-covered Bat-wings) she saved and named WindFae. I never spoke as WindFae, simply meowing and making other cat noises and Selina had to figure it out. Eventually they develop a bond that enables her to more directly understand WindFae's 'language'.
Ceren-Dee has a sword called 'The Blue Dragon's Tongue', discovered seemingly at random early in the campaign and then numerous reveals about its powers and origins were spread out through the rest of the game. It is a +3 Elven Longsword, +5 vs. Blue Dragons, and it has the ability to catch/absorb any electricity directed at it (Reflex save required). The electricity is then held within the blade and can be seen faintly crackling over the surface. By uttering the High Elven word for 'Lightning' the electricty can either be released as a bolt or discharged on a successful melee attack. She has used it to shock a group of enemies moving through a large puddle by stabbing into the water and it once disrupted an Artificer's invention by sticking the blade between two tesla-coil-like antenna.
OK, that's all for this one. Whew. Big entry, huh?
Next up, it's cold outside and there's no kind of atmosphere but inside we've got everyone's favorite Gallus Sapien, CHICKEN!
AD
Barking Alien
Posted by Adam Dickstein at 9:32 PM