One of my best, longest, and most influential games in recent memory was my Traveller campaign, Operation: PALADIN.
It was also, on occasion, something of a nightmare. Fear of being injured, discovered, or any number of other things kept some PCs from being bold when it was needed. This frustrated other PCs who would respond by acting independently in an especially bold fashion that was counter to the rest of the team. You can read more about the trials, tribulations, as well as the good times by checking out the Operation: PALADIN tag. I believe there are some general Traveller posts that may discuss this campaign as well.
While I've talked about this campaign and some of its character in detail in the past, one character who hasn't received enough attention is my friend Ray's PC, Dr. Emil Fujikawa. 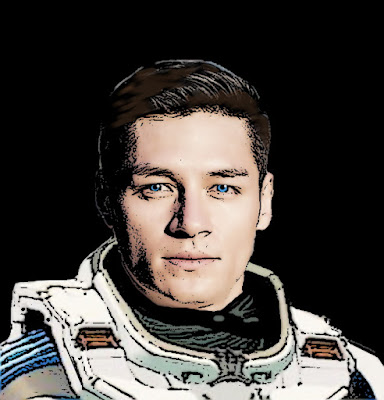 This was the single most daring thing that I had done throughout the entire campaign and it held up the premise that I started the campaign with, that intelligence and caution with just a little bit of daring saved the day."

Legacy: A planned sequel to Operation: PALADIN never fully got underway and I haven't run a long term Traveller campaign since this one. The end result is Fujikawa  -who survived and had a solid epilogue in the original game- has not been seen since the Operation: PALADIN campaign ended.
In a twist I couldn't be happier about, Ray and my friend Will (who played the oft mentioned Belarus Hosta in Operation: PALADIN) are currently running a prequel campaign set some 15 years before ours. While Fujikawa doesn't appear, it details how the villain of Operation: PALADIN rose to his position of power and put his plans in place.
Game Info: Dr. Emil Fujikawa

Next up we travel to that galaxy long ago and far, far away to meet a tough Mandalorian mercenary with a rather droll origin. This is the way of FLEETO WOFF!