Wow am I behind.
Real life and my ongoing gaming pursuits - of which there are many - have gotten in the way of yet another of these online challenges. To be honest with you dear readers (and I always am) I'm pretty bummed.
However, I am not giving up! Not only will I keep going but even if I don't do 31 Characters by January 31st, I will continue afterwards and complete this even if it's well into February. I am enjoying doing this and the characters, not to mention the players who played them in many instances, deserve to been seen.
With that...
This next character is notable for a few unusual features. First, he is only the PC of mine to appear on the list. Second, he is the only one so far who didn't make it. He died. He was not the most in-depth character I ever had by a long shot and he didn't stand out with a fantastic backstory or anything. He was just fun to play, likeable, and went out a hero. 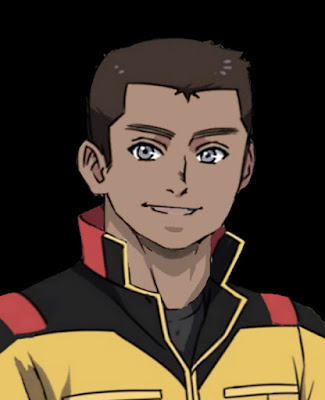 Character: Jet Kahele
AKA: Lieutenant. Jet 'Ohana' Kahele
Player: Adam Dickstein
System: Mekton II - House-rules and Modifications to more accurately reflect setting.
Campaign: Mobile Suit Gundam 0088: Sign of the Times
Gamemaster: Cory? Cameron? Damn. I forget. I think it was Cory.
Circa: Late 1991
Origins: This one is interesting. While working at the uptown Forbidden Planet (a popular Sci-Fi Book/Comic Book/Toy store in NYC), I became friends will a customer named Cory who was really into Japanese Anime and Manga, especially anything Mobile Suit Gundam related. As I too am a big Gundam fan, we got along really well.
At some point Cory's friend was going to run an RPG campaign using Mekton II and set just after the events of Zeta Gundam. The fellow, Cory, and I all loved Zeta Gundam and had been largely disappointed in its sequel Double Zeta or ZZ-Gundam. We much preferred Gundam Sentinel, an illustrated novel that came out around 1987, with a story set between Zeta and Double Zeta. The Gamemaster's story was also set at this time and kind of ignored Double Zeta, making it a sort of alternate history.
What happened next was that at the last moment, like the day before their first session, the guy panics and says he isn't ready and can't do it. He eventually calls the campaign off completely and apologizes to everyone, gripped by some kind of 'stage fright'.
Cory had been so looking forward to the game and was really disappointed. The next day he offered to take over the campaign and run it himself so that A) all the work the first fellow did wouldn't go to waste and B) the players who were really excited about it wouldn't be upset. The guy said yes and asked if he could be a player. Cory said sure and then asked me if I would like to join in.
You see...Cory had never GMed before and said it would help to have someone there who had played and ran Mekton before and knew Gundam especially well. I jumped at the chance.
Backstory: As I mentioned in the opening preface, there isn't a long and brilliantly written history about this character prior to his first appearance in the campaign. He basically just shows up with the conceit that he is friends with the lead pilot and knows a lot of the deck crew, engineers, and other 'working class' personnel aboard the Earth Federation Mobile Suit Assault Carrier Llamrei.
We learn over the course of the campaign's two dozen or so sessions that he is from Hawaii on Earth (though not which island in particular) and that he largely joined the military because he had to. His parents wanted him to get a real job and stop loafing about all day surfing and having fun. His father in particular wanted him to learn responsibility, discipline, and leadership skills.
Like everything else in his life, Jet took this in stride and still found a way to enjoy himself. For example, he and a bunch of engineers rigged a way to 'air surf' by placing a surfboard in a low gee section of the ship and then engaging exhaust fans. His makeshift surfboard has the word 'Ohana' painted on it, which is how he got his nickname.
Overview:  Throughout most of the campaign, Jet is a voice of calm wisdom and light hearted positivity for the band of Mobile Suit Pilots operating between Earth and an outer O'Neil colony called 'Logres'. Though the situations were often violent and dark, I feel like Jet grounded the team and made it clear what they were fighting for, especially when that wasn't easy to see.
Another thing I really liked about him was that he added warmth and humor to the campaign without resorting to sarcasm and snappy, one-liners. I had felt that wasn't quite right for the character and almost too easy. I wanted him to lighten the often heavy mood but in a more genuine, organic, and perhaps subtle way. 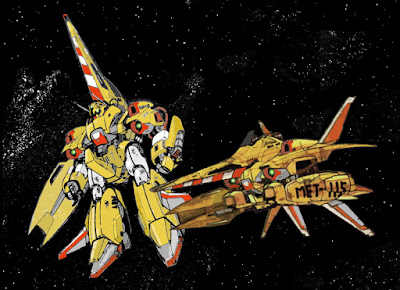 Jet Kahele's Customized
MSA-005s 'Strike Methuss'
The Highlights:
Sadly, Jet's greatest moment was also his last.
In the final session of the game the PCs were in serious trouble as a result of some bad intel and awful rolls. The pilot of our prototype mech, the Gundam 'Excalibur' (a sort of hybrid Zeta Gundam and Gundam Mk. II - Cory and I collaborated to design it and we built of plastic model) as well as the Mobile Suit itself, have taken severe damage. Most of the rest of the team was pinned down in Sol's asteroid belt by enemy fire.
Fast and maneuverable, I had avoided taking major damage thus far in my MSA-005s 'Strike' Methuss. As the enemy reloaded their ammo or recharged for another attack, I transformed my mech into 'Fighter Mode', dodging behind asteroids to avoid opposing Mobile Suits. I then had the Methuss fly blow the plane of the battle and then climbed to reach the Excalibur. Flying past it, I fired my lasers to get the Enemy Ace Pilot our fearless leader was facing to back off. Coming down into the fight from 'above' were three lesser Aces, 'Lieutenant Level' opponents there to back up the main villain.
Transforming back into a humanoid robot, I grappled all three enemy Mobile Suits and continued rocketing upward with everything the Methuss had. I ended up slamming all four of us into an asteroid which then collided with the Enemy Command Ship. This was followed by a Boom. A really big Boom. Which was followed by several smaller Booms and a final super-Boom that consumed the three enemy mechs, Jet and his Methuss, and more than a third of the command vessel.
Jet died buying the squad leader, his best friend, some much needed breathing room as well as taking out three opponents who could have caused him additional damage, making what he did next unlikely to happen or succeed.
The Excalibur, without the Enemy Ace and his Mobile Suit in our hero's proverbial face, was able to access his super-charged, prototype Beam Saber, eject it into his good hand and go absolutely Miyamoto Musashi on his opponent. Not only did this turn the tide of that duel, it inspired everyone else to think they could actually win the day.
And they did.
Legacy: Lt. Jet 'Ohana' Kahele was posthumously awarded a Medal of Honor. The other PCs had a kind of 'Irish Wake' funeral for him which was pretty awesome.
Honestly, I haven't thought much about Jet or used him since this campaign nearly thirty years ago. It wasn't until I was trying to think of more of my own characters to use for this challenge that his name and story came back to me. That isn't a slight against the quality of the character or how much I enjoyed playing him mind you. He simply, for whatever reason, never came up again.
Now that could be because he died. Granted, I can recall quite a few characters I would call 'memorable' who didn't survive their campaigns, including my very first PC ever. It's just that, I wonder if we are more prone to re-tell tales of those that survived.
Game Info: Jet Kahele's character sheet is long gone, possibly even one that I never got back from Cory, the GM of that game. The same is true of the Mecha record sheet for his Mobile Suit. I don't recall anything too exceptional about his stats or skills except that he had high scores in Cool and Technical Ability, decent Luck and Reflexes, and an average Intelligence.
Look here for the specs on the standard MSA-005 Methuss from Zeta Gundam. Jet begins the campaign with one of these but it is customized over the course of the series to feature even more thrust, improved maneuverability, only four standard beam sabers, a shield, and a 'Beam Bayonet' that extends out of a casing on top of his left forearm; the device is hidden underneath his arm-mounted Laser Gun and feeds off the same power supply.
Next up, we return to Aerth yet again to meet The Winghorn Guard's resident Pirate Hero, JORVAN STARSBYNIGHT and learn the secret of his successful career. Cheating!
AD
Barking Alien
Posted by Adam Dickstein at 12:30 PM