This next character is the first one on the list that fits into the Comic Book Superhero genre, which like the previous Star Wars entry is quite surprising in how long that it took to get to one.
What we have here is no Superhero however. This is a villain, though in truth that is a simplification. As you will read, The Gamma Man, aka DA GAMMA-MAN, is more akin to the act of an angry god.
Facing off against the The Gamma Man isn't like the Avengers facing off against M.O.D.O.K. or even Thanos. It's more like when the Justice League are called in to save an Oil Rig from an undersea earthquake, as well as a beachside Californian town from the resulting tidal wave the earthquake caused. 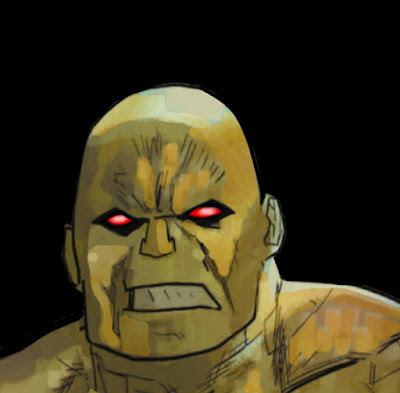 Character: The original version created by Nelson Marty and Jemi Stark was called 'DA GAMMA-MAN'. Shouted loud and clear with the fury of a hurricane. 'Da' being a purposeful mispronunciation of 'The'.
My alternate version, which I've used in several Superhero campaigns over the years, also uses the 'Da' when he speaks but is referred to by others as The Gamma Man.
Player: Non-Player Character. Created by Nelson Marty.
System: I've used The GAMMA MAN in Champions 4th Edition, Mutants and Masterminds 1st and 3rd, and Villains & Vigilantes 2nd Edition. Nelson may have used him in Heroes Unlimited.
Campaign: Dynamos Unlimited (M&M), The New Champions (Champions), and others.
Gamemasters: Adam Dickstein and Nelson Marty.
Circa: Originally created around 1985-86. Used off and on since.
Origins: According to Nelson, the creator of The Gamma Man:
"This character was created, as many of mine were, as a joke during a phone conversation.  Me and a good friend were joking around and one of us said "well look behind you"  and the response was, "BOOOOMMMM...DA GAMMA-MAN!!", and the rest as they say is history.
Funny enough, when I first drew him I was doing my best to homage/spoof the king, comics legend Jack Kirby, but [for some reason] I drew him looking like he was in some kind of containment/restraining suit or rather what was left of one. Then about 10 years later, DC used that chip they snuck into my head and low and behold 'Doomsday' was born. That is another story.
Fortunately I had already come up with his secondary design.  He had a chromed gold look with the gamma symbol on his chest. Adam had drawn a version but had never seen my color version and made his green. When I asked him why he'd you made him green, he said because he's the Gamma-Man and gamma equals green. My response was (jokingly) that's Marvel, do you want to get sued!?  😅  But, as any creator should, I took his concept of the character and worked it into my lore.  This is one of the few characters I've created where total strangers will nearly curse me out once they realize I'm the guy that created him.  Thanks to him being used by various friends in their campaigns.
That is the origin of DA GAMMA-MAN and even The Gamma Man but it isn't all the stories of all the Gamma Men. DA GAMMA-MANs? Are they Gamma-Man Men? People we've run games for and people they've run games for have used this character or a version of him all across the multiverse, hypertime, and then some.
I actually had a guy I never met before yell 'DA GAMMA-MAN!' in a Superhero RPG session at a convention in NJ when another players PC blew up a villain with powers similar to the Human Bomb. My jaw dropped. "How the hell do you know who The Gamma Man is", I said dumbfounded.
"What?! How do you? We fought him in my friend's game in the Bronx."
Backstory: Da Gamma-Man. Nobody truly knows his...its…origins. Force of nature, science experiment gone wrong or worse, gone right.  What is known is that he appears seemingly at random, in a huge, explosive fireball, causes carnage on hitherto untold scales and then just vanishes as chaotically as he appeared.
From the best guesses/observations of the myriad civilizations that have encountered Da Gamma-Man, he revels in combat; pure, unfiltered, destructive combat.  He has been known to just as suddenly leave a fight if it is no longer "fun" for him as quickly as he enters into them.
Many hypotheses exist. He's a test, to get those he fights ready for who knows what.  He's a plague, a god of destruction, a chaos elemental. Some even say that his explosive teleport allows him to traverse both space, time, and dimensions.

At a glance he is obviously super strong and has either true invulnerability or an insanely high degree of regenerative healing. His endurance is Unearthly. As previously mentioned, he can teleport and the range is unbelievable. The telltale signature of his teleport is an implosion to explosion, exit to entrance. The devastation of his teleportation is possibly due to how far he can teleport and the energy required to do so.

He does appear to have some limited telepathy because anyone that hears his ubiquitous self-naming scream tends to hear it in their native tongue. Along with that is the fact that he seems to be able track a target anywhere, across any distance.

Like the boogie man, don't say his name, be it once or three times, or else you may come face to face with...DA GAMMA-MAN! 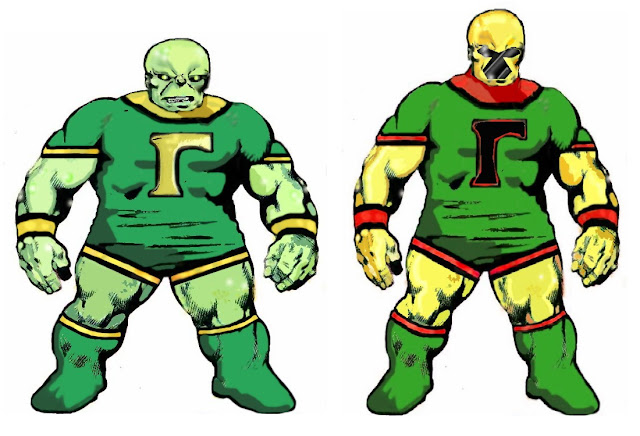 Two versions of DA GAMMA-MAN!
On the left, The GAMMA MAN as he appeared in our Mutants and Masterminds game
On the right, DA GAMMA MAN as he appeared in one of our Champions campaigns.
Overview:  As noted, there have been several variations of The Gamma Man, though each shares one very distinctive element in common beyond the way they roar out their name. They are all incredibly dangerous, powerful, and a nightmare to face off against.
In one of my earliest uses of him, he nearly defeated an entire team of Villains and Vigilantes PC Superheroes, killing two of them, before being held in place long enough that he tired of the battle and left.
In one Champions game he fought our three most powerful members to stand still physically, almost easily, before being cast off into another dimension by our resident Dr. Strange-type Magic hero.
When the heroes of our Dynamos Unlimited campaign were temporary banished/trapped on the extra-planar planet known as Nth World, The GAMMA MAN was one of a handful of villains brought there as well from infinite parallel Earths. There were only four villains in total, while the combined number of Dynamo members were 9 or 10 I believe. The GAMMA MAN proved to be very difficult to harm, though he was stunned (mostly out of sheer surprise and shock) by the bold and desperate hijinks of the costumed clown hero called Trix. 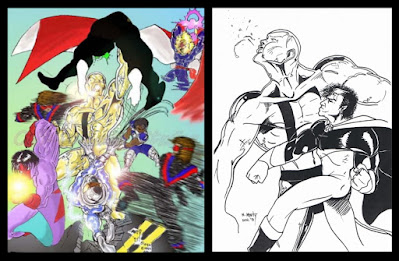 Art from the early 1990s by
Nelson Marty

The Highlights:
There are many, including those listed above by the fight between my version of The GAMMA MAN and the Superhero team 'The Safeguard' was definitely the most brutal.
At one point, Meter Man (who can shrink or grow in metric increments) sees THE GAMMA MAN on the top of a nearby building. Becoming a decameter tall (roughly 32 feet), he reaches to grab THE GAMMA MAN and just before he has him THE GAMMA MAN teleports. He reappears on Meter Man's shoulder, blasting his face such that he is thrown backward. Meter Man lands on his back in the middle of the street.
THE GAMMA MAN falls off the larger being as Meter Man topples and crashes to the street below. He is hit by the teams' Speedster but it barely phases THE GAMMA MAN. He teleports again, reappearing on Meter Man's chest with such force he plants him into the a crater in the asphalt.
Pushing his power to the limit, Meter Man shrinks down to a millimeter and then quickly back up to his maximum height of 10 decameters, or 328 feet. Doing this below THE GAMMA MAN he is able to toss the monster high into the air where he is caught by three flying Supers, one with Telekinesis, one with Energy Blasts, and one with Electric/Lightning attacks. Held in a damaging bubble of energy and psychic force eventually annoys THE GAMMA MAN in a different way and he teleports away and does not return.
Meter Man, injured earlier in the battle protecting school children and later the agile archer Arrowsmith, dies from his wounds.
Legacy: DA GAMMA MAN IS! DA GAMMA MAN ALWAYS WILL BE! DA GAMMA MAN!
Game Info: The best way I can describe THE GAMMA MAN's powers are in Champions terms: Energy Blast - Area of Effect - Explosive linked to Teleportation. Limitation: Only Activates on Reappearance.
Also, Super Strength (a lot of it), Armored Skin, Damage Resistance, Regeneration, and Super Jumping.
DA GAMMA MAN!
Next up, the school year is starting and look who thinks he can sit at the Cool Kids' table. It's none other than Blast City High School's resident Super-Science nerd, GATES!
AD
Barking Alien
Posted by Adam Dickstein at 9:45 PM