Gaming Mother Forker! Do You Speak It?

Recently, I've become kind of obsessed with the Saikoro Fiction or 'Dice Fiction' system found in a series of quasi-indie RPGs in Japan. I say quasi-indie because they're not incredibly wide-spread in popularity but they are put out by Adventure Planning Service, a well-regarded RPG publisher best known for the Japanese tabletop RPG Magazine Role & Roll.
Here is the official website for Saikoro Fiction in Japanese.

I am not sure I am in love with what they've done with the game so much as what I think I could do with it.

Of course, that's if I could completely wrap my head around it. You see, the games that use it are in Japanese and I don't fluently read or speak Japanese. Luckily, I know some people who do. 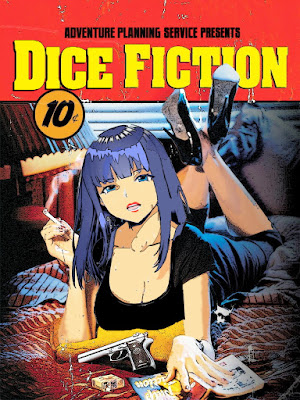 With apologies to Quentin Tarantino

Over on Twitter (What? You don't follow me on Twitter? What's up with that? Check out Barking Alien's Twitter) I was smart enough to ask Claytonian of Kill It With Fire if he could answer some questions I had about the Dice Fiction game. Specifically, I wanted to know if the game had a System Reference Document of some kind or if there was a base version without the added rules unique to each incarnation that has been published.

You see, each Dice Fiction game has a key concept in common; a grid/chart of 6 stats with 11 skills/abilities under each stat (numbered 2-12). Some of the skills on the grid are marked as 'Strong Skills'. To do something, you roll 2D6 against the appropriate 'Assignment Skill' and try to meet or beat a Target Number.

A sample Dice Fiction grid created by me.
The black cell/white text skills are the Strong Skills.
The black column is not counted when adding up the Target Number (See below).

For example: Using the chart I made above, if asked to roll a Medicine Skill check the player would roll 2D6 and have to meet or beat a 5. If asked to make a Sleight of Hand Skill check the player would need to roll an 8 or better. Start with a base of 5 and then look to the closest Strong Skill, which in this case is Psychic Powers. The filled in column adds nothing, Psychic Powers is 3 slots away from Sleight of Hand, so 5+3 is 8.

Claytonian wasn't able to answer the questions I had about the game himself so he did one better and put me into a three-way conversation between the two of us and Andy K of the Japanese Tabletop RPG Blog. Andy was quite helpful and had this to say about the subject:

"In short, there's no SRD for Saikoro Fiction games because they are all different. It would be like looking for an SRD for "Powered by the Apocalypse" but even harder because many of these games are very, Very, VERY different.

Many of them have a similar look and flow to Shinobigami: Sheet with a 6 by 2-12 "skill grid", a 3-round 1 scene/player play structure, etc. But after that they are all VERY different.

This is especially true of many of the contemporary ones released. They have great ideas, interesting mechanics, not necessarily big sellers (Shinobigami pretty much dominates Sai-Fi, everything else is kinda in its shadow); and their character creation and playstyles are very different than Shinobigami/inSANe/Magicalogica.

If there was one commonality that would tie them together, the SRD would say "The book includes - and starts off with - a full session replay of the game, complete with lots of notes about what is happening. Then, the rules are easy to read and understand and lead to the game being playable within 2-3 hours of purchasing on a quick read-through. A session can last 2-4 hours but it contains an entire story; it is not meant for campaign play (so you can have a solid, done experience in just a few hours and no requirement of an ongoing campaign). Also, more often than not it is targeted towards novice GMs and Role-players, holding their hand through some of the process". That is the only commonality that they all share."

Yeah that's fine! That isn't what I was hoping for exactly but it is also absolutely fascinating and has me super-charged up to work with the concepts put forth in Dice Fiction even further. Not only do I have my own ideas on how this could be used but how do I adapt it for long term play? How useful is it for playing over the internet, which is our primary mode of gaming these days.

It is likely that either or both Claytonian and/or Andy K will be posting a similar recount of this conversation on their sites and if they do and it adds to the discussion I will definitely link it here. In the meantime, don't be surprised if you see more about Dice Fiction - or a Barking Alien variant on it - very soon.