Here's Where Things Get Dicey

Fair Warning: This entry goes all over the place but if you'll follow along I think you'll enjoy the ride. 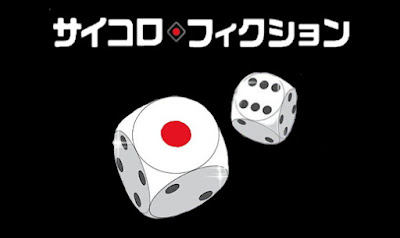 My previous post on the Japanese tabletop RPG system Saikoro Fiction, or 'Dice Fiction' in English, by Adventure Planning Service was posted this morning, yet it was based on a conversation I had last Wednesday and actually written this past weekend. Why did it take so long to complete? Partly it was due to the accompanying illustration and the sample Attribute/Skill Grid I put together.

Mostly though, it was because I did some addition research, had some thoughts, and got feeling truly creative again. Between my original twitter conversation and now I've been incredibly inspired in a way I haven't felt in a long while. I think the last time I was honestly this jazzed about gaming ideas was when I ran our Red Dwarf/Yellow Sun campaign using the ALIEN RPG.

What follows - both in this post and over the next month - will be a breakdown of a series of ideas that have come to me, not all of which flow in a straight line. I will do my best to organize them into some kind of order. At some later point, when the ideas are largely out of my head and on paper/screen, I will likely compile some of them into a book of some kind. I can even see a sellable product coming out of some of them.

I am really intrigued by Dice Fiction and its Attribute/Skill Grid but one of the things I noticed when building a sample one was that with six Attribute columns and eleven Skill rows, the total number of Skills in sixty-six. 66! That's kind of nuts. It was really tough coming up with 66 names of Skills and what they might possibly be used for (or why one might be used as opposed to another).

I propose a 6 x 6 grid which would result in 36 skills. I also think that not every PC in a given game has the same 36 Skills. Creating different grids enables PCs to cover areas other PCs don't which not only allows for greater character customization but also enables you to make Templates not unlike those found in Star Wars D6. In a given setting its possible everyone has Dodge or Melee Weapon under the Attribute 'Prowess' but not everyone has the same special abilities, magical skills, or martial talents under their 'Technique' column. I believe some of the official Dice Fiction games do work this way.

Sample Attribute/Skill Grid for my Dice Fiction version
of the RPG Yokai Hunters Society
Now here's where my first idea comes in; a few weeks back I downloaded the game Yokai Hunters Society from the amazingly cool itch.io website. A neat, rules-lite game of masked, Meiji era Japanese folks battling demons, ghosts, and spirit monster against the background of the political and social change prevalent in Japan in the late 1800s. It has some similarities to a number of Anime and Manga series, notably the extremely popular Demon Slayer: Kimetsu no Yaiba, as well as numerous Japanese live-action TV shows and Movies in the Horror genre.

Wow! I mean, seriously right up my alley, right? What a great idea for a game. Only...I don't love the system. Very simple, almost too much so, with not a lot to sink ones teeth into. It is functional, even fun, but a little lackluster for my tastes.

If I apply the Dice Fiction rules to the setting, I think I have something. Something really interesting that I can see being used for a long term campaign.

First though I am thinking of fleshing out some of the 2D6 vs. Assignment Skill mechanics with conditions or points that would allow for rolling with Advantage or Disadvantage. For example, an Enchanted Sword that gives you Advantage on your Melee Weapon/Sword so that you need to beat the Target Number on 2D6 but roll three six-sided dice and take the highest two. Meanwhile, if injured or perhaps cursed by a Yama Uba (Mountain Hag/Witch), you might roll three six-sided dice and take the lowest two.

I am definitely going to work on this and flesh it out a bit more. In addition, I will be posting both a more detailed overview of the basic Dice Fiction game (based on my research) and this alternate Barking Alien version I am developing.

This leads me, indirectly mind you, to another idea I have. While it has nothing to do with Dice Fiction, it was looking into that game that reminded me of my age old love affair with Anime, Manga, and RPGs with an Anime/Manga influence and flavor. I miss running our very Japanese influenced games of Cyberpunk 2020 and Space:1889, not to mention games like Mekton and Teenagers from Outer Space.
I figure it's about time I made one of my own.
Stay tuned...
AD
Barking Alien


My apologizes to the creator of Yokai Hunters Society, Chema González, who did an excellent job with the writing, illustrations, and layout. Clearly impressive enough to inspire my own take on the game.
Also an apology to Nate Treme, who created the Tunnel Goons rules used in Yokai Hunters Society. Again, fine rules, completely workable, but they just didn't grab me personally.
Posted by Adam Dickstein at 2:37 AM