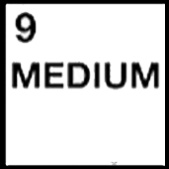 Wait...Medium?
As in 'the size between Large and Small'? That doesn't sound at all interesting as a prompt. Maybe they mean something else, such as 'a substance/material or empty space through which a force, signal, or wave passes'. No, that doesn't work either.
Oh wait...a Medium!
A Medium is someone who serves as a conduit between the worlds of the living and the dead, enabling themselves and others to communicate with spirits of the deceased. These individuals often utilize things various items such as ouija boards, seances, and other means of conveying the wishes, intentions, or messages of the deceased.
This is all hokum and poppycock of course. Mediumship is a scam dating back to ancient times but becoming popular in the modern world in the late 19th century. After fading a bit in the early 20th century, interest and belief in the paranormal made a powerful resurgence following the first World War. Sessions with Mediums were a favored form of entertainment for the upper-classes during this time and provided a sense of comfort and reassurance for families whose loved ones never returned from the conflicts overseas.
Investigations into the practices of Mediums brought revelations of widespread fraud and lessened their popularity once again. This is kind of a silly statement if you put any thought to it. According to the Wikipedia entry on 'Mediumship' 'Investigations during this period revealed widespread fraud-with some practitioners employing techniques used by stage magicians-and the practice began to lose credibility. Fraud is still rife in the Medium or psychic industry, with cases of deception and trickery being discovered to this day.'
So, fake thing is revealed to be fake. Stop the presses! I mean, are there also legitimate Mediums and psychics? Is there any proof at all attesting to the existence of psychic phenomena? No. That's like saying, "It is currently believed many sightings of a living Elvis Presley are thought to be hoaxes." REALLY? Not all? How is it not all?
Mediums can play an interesting role in RPG campaigns, either as PCs or NPCs, as they attempt to provide either a convincing ongoing con or - if your setting permits - an honest source of information from beyond the grave.
One of my all time favorite examples in my own games is Ziva Yesperani, 28 year old, female member of the Hoboken, New Jersey Chapter of the Ghostbusters in our Ghostbusters NJ campaign.
Wow, I've been mentioning Ghostbusters quite a bit lately. Hmm.

Small portrait by Lynn Morton
Color art By Kenichi Lowe
Ghostbusters logo by Michael Gross
Ziva has inherited a very special gift from her Mother's bloodline, though it manifests in a very peculiar way. Ziva can communicate with spirits of the dead...provided she knows at least one of the phone numbers they had in life.
From any working phone - land line, pay phone, cell - Ziva can dial the number a person had during their life and the ghost/spirit of that person will 'hear the phone ringing'. The paranormal being nearly always picks up, though in some cases they will ignore the call and another related being might answer the phone. Ziva can then speak to the deceased entity or its relative and perhaps get the ghost to stand down in the physical world.
I did quite a bit of research on Mediums and Mediumship for possible inclusion in my ongoing, ever-in-development RPG Unfinished Business. Many elements of the practice, including ectoplasm, table turning and table tapping, and other aspects are fascinating and well worth taking a look at yourself.
Wait...I feel something...there is a presence here with us. Oh spirit, speak through me! What is your message to those who will listen? The post...Yes! What about the post? The post is...is...
Over. See you next time!
Entry 9 - Medium
AD
Barking Alien
Posted by Adam Dickstein at 8:14 PM