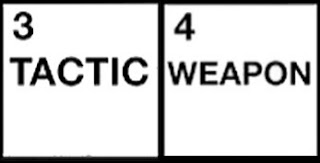 These two entries are connected in my mind so I will address them in a single post.
When I think of all the amazing Weapons and impressive Tactics I've seen in genre fiction and RPGs over the years - from the Death Star's planet destroying turbo-laser to Wolverine and Colossus' Fastball Special - I realize there is one thing more dangerous, more powerful, and more versatile than all of them...The Human Mind.
After all, the brain is the near limitless source from which all Tactics and Weapons arise.
I am very much a fan of RPGs that understand this.
I am less enamored with choosing the 'right' Tactics or Weapons at the 'right' time, I do not get particularly excited about the stats of a given Weapon or the usefulness of Facing or some other Tactical mechanic.
As with Maps in my last post, I'll note that I don't run War Games or games with heavy Tactical elements. Combat is definitely a big part of many of my campaigns but it isn't [generally] the focus of them. The Phaser and the Lightsaber are definitely cool, as if the Proton Pack and Sting. None of these are what actually wins the battle.
With intelligence and creativity, you can take down an army with a pointy stick. At least, you should be able to.
Entry 3 & 4 - Tactic and Weapon
AD
Barking Alien
Posted by Adam Dickstein at 10:31 PM