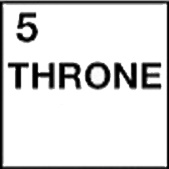 The first thing that came to mind with the word Throne was the stuff of Fantasy - Kingdoms, Queens, Courts of Intrigue, and other things that honestly rarely play into my campaigns. It's not that I never bring these themes into my games but rather that I don't run or play in a lot of games where these things are addressed in any detail.
That said...there are Thrones beyond Fantasy and the prompt could easily conjure thoughts about Emperor Palpatine from Star Wars or the Padishah Emperor, 'Emperor of the Known Universe', in Dune. There's Emperor Strephon and his numerous predecessors ruling the Third Galactic Imperium of Traveller.
Somehow though, none of these feel quite right when trying to come up with a post about Throne. Could it be because these are usually either background characters in their respective settings or reflect conceits similar to those of their Medieval Fantasy counterparts? Are all Thrones the focus of their own 'Games of Thrones'?
Tales of a Throne and what it takes to seize one just don't do anything for me. They are nice to have to add flavor to a setting but I don't want to tell tales of Dukes and Duchesses, Baronesses and Lords.
Mine are usually the stories of common folk or those whose celebrity is self-made. The center seat on the bridge of a Starfleet vessel is my kind of Throne. No noble blood need to sit in such a chair.
Entry 5 - Throne
AD
Barking Alien
Posted by Adam Dickstein at 8:08 PM