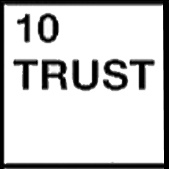 My initial thoughts here are honestly a bit depressing. I will try to stay upbeat but I fear its a lost cause. I'm going to be bummed out and likely a bit rant-y. You've been warned.
Trust is perhaps the key, number one, most important element to running and playing a great game. The players need to Trust the GM, the GM needs to Trust the players, etc. Seems simple, right? So...what's happened over the years that has created so many distrusting gamers?
In the past 15 years or so I've encountered more gamers that seem to not Trust their fellow participants then in my previous 29 years in the hobby. It is hard to explain or pin down exactly how this manifests as it isn't the same in each and every case but I see it reflected time and again in my dealings with other GMs and players.
I remember my (late) buddy Dave Cotton, while playing Champions, had his Superhero leap off a moving aircraft to drop onto another aircraft moving at a lower altitude. Another player asked if Dave's character could fly, to which Dave replied that no he could not. Panicked, the second player did what he could to save Dave's PC and prevent him from performing his bit of daring do.
The second player didn't Trust Dave to either have a plan or have the where-with-all to come up with one on the fly (or the fall as it were). This was in the early days of the second players time in the hobby and he has improved leaps and bounds since but I do still see this sort of thing among various players.
In a Star Trek session, the Engineer was trying to jury-rig a cool way of defending someone in Sick Bay but the player wouldn't reveal exactly what he was up to. He wanted it to be a surprise like on an episode of one of the Star Trek TV shows. The action was a tad confusing I'll admit, as his PC was doing some odd modifications without providing any explanation as to why. I gave him the benefit of the doubt initially, curious to see where he was going with it
Another player, the higher ranking Science Officer, didn't trust that the player or the PC had the ship's best interests in mind. I'm sure the Science Officer's player would say that wasn't the case but that is the impression he gave to both the Engineer's player and myself. The Science Officer pulled rank and the two - players and PCs alike - argued.
It seems to me it might have been a good idea for the Engineer to give the Science Officer the courtesy of some kind of heads up, such as "I've got a plan sir, trust me." or "Don't worry Commander, everything's under control". It is likely that would have been enough to curtail the disagreement. It certainly wouldn't have hurt and would have still allowed for the action the Engineer took to come as a surprise to the group. Why would that be necessary though? That I do not know. Suffice to say, it could having nothing to do with trust but simple how people communicate.
This is something I see A LOT. Players not trusting other players. They don't trust each other to:
and of course...
This pains me. It gives me a mild stomach ache and sometimes a light headache. It makes me sad. It drains my enthusiasm for continuing to run the session in which these sorts of things occur. It's also something that was virtually unknown to me prior to 2005.
What causes this? What forms Trust and what produces distrust amid gamers (or people in general)?
I can only say that my pre-2005 experiences shared a few traits that lead to a greater sense of Trust between the participants.
We all shared the same goal when gaming - Enjoy time together while creating a cool story.
We all wanted everyone else to have fun.
We all wanted to entertain each other.
We were friends outside of gaming.
When we didn't agree we talked about it to understand each others viewpoints.
Factors such as communication, personal effort, and time merged with the concepts above to generate Trust over the course of our relationships.
Perhaps this is the key. Perhaps the new players I've been encountering haven't been playing with each other long enough. Perhaps as they haven't known each other for a sufficient amount of time (however long is that?) they haven't developed a good rapport. Maybe they come into it from the very being with very different goals (this is actually quite true and likely).
Maybe they're just lazy.
Things have improved over the last few years, with more time having past and a better understand of each other having developed. In addition, the memberships of the groups I game with have changed and with those changes the group dynamics.
Generally I am hopeful that Trust will be built and earned more and more as we go forward. At the same time, I can't help but wonder...
Has Humanity just become more and more cynical, apathetic, and fearful? Is it harder to Trust by our very nature. I hope not...because the first thing that comes to mind when I encounter someone who doesn't Trust there friends is that its because they themselves are untrustworthy. It is an extension of, 'the people who worry about cheating the most are the ones most likely to cheat.'
Given the chance to be untrustworthy, why wouldn't you? They would.
Entry 10 - Trust
AD
Barking Alien
Posted by Adam Dickstein at 10:12 PM