Following up my previous post, I'll continue explaining the general mechanics of my kitbashed Ghostbusters Tabletop Role Playing Game by breaking down the various components of the system's Player Character record sheet.
The last entry discussed the left side of the sheet. This post deals with the right side of the sheet beginning with... 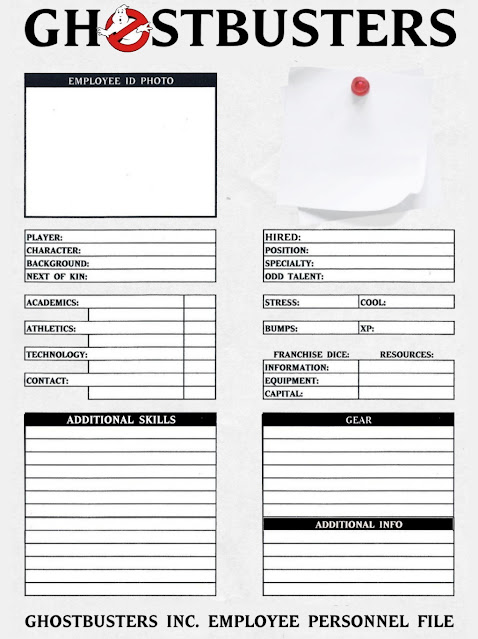 Hired: This is used to record when you created the character. I like having this information.
Position: This is the Player Character's role in the franchise. I've used it to give specific characters oversight over each type of Franchise Dice. For example, if one PC is 'Treasurer' then they would have final say over Capital. The person designated as the 'Tech Department' would have the last word on Equipment. Alternatively, this can donate more of an RP role such as 'Field Leader' or 'Lead Researcher'.
Specialty: Each Ghostbuster should have an area of expertise all their own. Examples include such things as Hauntings, Demonic Possession, Audio/Video, or Motor Pool (Vehicles). When dealing with their specific field of knowledge and/or experience the Ghostbuster receives an addition +1D Action Die to any related activity. If someone specializes in 'Classic Monsters' they would get one extra Action Die to recognize a Werewolf in Human form (Academics) or wrestle a Lagoon Creature underwater (Athletics). The Specialty stacks with all other Action Dice (Attributes, Skills, and Additional Skills).
Stress: OK, here's the big change. When things get spooky, the PCs are assigned Stress by the Gamemaster. Stress is represented by the Ghost Dice (or some other dice that are clearly different from your Action Dice) and are largely the same as the Stress Dice from Free League's ALIEN RPG as noted in this post.
If a PC has Stress, roll a number of Stress Dice equal to the amount of Stress you have - the PC's Stress Level - in addition to any Action Dice you are rolling when performing a task. A Six on any die - Action or Stress - is a Success. A One (or in my case a 'No Ghost' symbol) on the Stress Dice indicates Panic.
If any Stress Dice come up with a one you take a D6 - any will do - and roll it, adding your current Stress level and each die to come of with a one past the first to the result. You then reference the Panic Chart to see what goes horribly, horribly wrong...I mean to see the exciting outcome.
For instance: Ray has a Stress of 2 while facing off against a Class V Full Roaming Vapor. He fires off a Particle Stream from his Neutrona Wand rolling his Technology Attribute of 3D and his Additional Skill of Neutrona Wand for +1D. Ray has no Signature Skills that apply so that's it, 4 Action Dice.
Rolling 4 Action Dice and 2 Stress Dice he gets: 6, 5, 4, and 4 on his Action Dice and 1, 1 on his Stress Dice. This means he has one Success but also two Panic. He then rolls one 6-sided die getting a 2. To this he adds 1 for a second Panic roll after the first and his Stress level of 2. His total Panic Roll is 5. Referencing the Panic Chart it looks like Ray manages to keep it together. 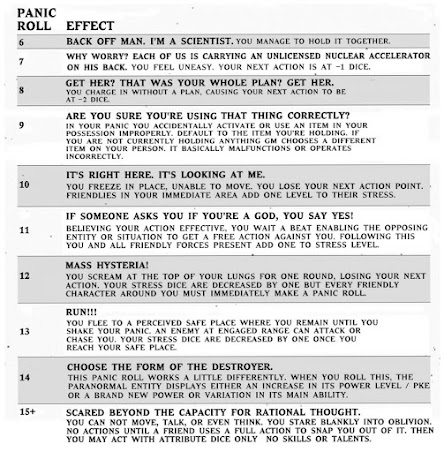 Now let's say everything had been the same except that Ray's player rolled a 6 on his Stress/Panic roll. That would be 6 plus 1, plus 2 more for a total of 9. According to the Chart above that results in, 'Are You Sure You're Using That Thing Correctly?'. Ray's player and the GM decide that while Ray did hit the target, he also hit the wall, the ceiling, and a very expensive antique chandelier that came crashing down onto a large dining table.
It's OK, the table broke the fall.
Cool: Each character begins the game with a Cool of 2. Cool is not automatically replenished once used but rather awarded during the game for great character moments, really quick thinking, making your GM and fellow players laugh out loud, and reinforcing the themes of Ghostbusters. In addition, each PC involved gets 1 Cool at the end of a successful 'Case' (my name for a Ghostbusters Adventure Scenario). Unspent Cool from one session does carry over to the next.
Cool can be spent in two different ways. First, it can be used similarly to a 'Push' [ in the ALIEN RPG]; by spending a point of Cool the player may take a roll they just made and re-roll any dice that did not come up a Success (a 6 on any die) or as Panic (a 1 on the Stress Dice). In addition, you may add one more - that's one additional - Action Die. This is often referred to by my players as a Do-Over so that'll be it's 'official' name. Note that this bit differs from the version in ALIEN but better reflects the PC being a world-saving hero and Ghostbusting being cool.
The second way it can be used is to create an Edit. An Edit is a retro-active change in the situation at hand that can provide an advantage to the team. In order to initiate the Edit you spend a point of Cool and then identify the nature of the Edit, i.e. how it's being explained away in the game's continuity. Is it a Flashback, an Interview Scene (as seen in the Ghost Hunters cable series and its spin-offs as well as The Office), a post-it note you look up to see that clues you in, or whatever works best for the moment.
A great example of this occurred in one of my Ghostbusters, NJ sessions where the PCs were investigating various fires being set by an unknown arsonist at a beach resort. When the players/PCs discovered the fires were set by what's known as a Fire Ghost they split up to try and locate him. One pair of Ghostbusters found him in a large suite and he erupted in flame which blasted towards them. One player immediately spent a Cool point and had his Ghostbuster in a side interview wherein he told the 'audience' that since they knew about the fires going in, each duo had been equipped with a hand-held fire extinguisher, "Which came in real handy just about then...". 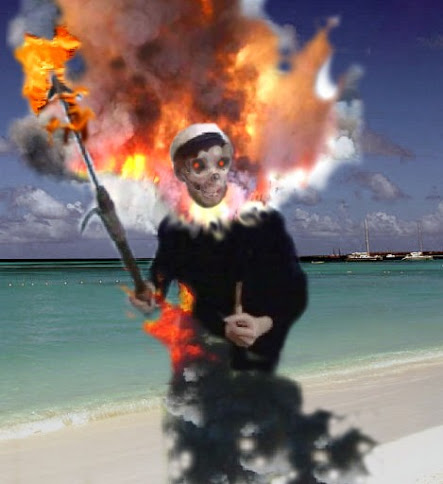 Bumps: Hit Points of a sort but you only take a Bump after one of your Attributes have been reduced to 0. I will discuss this in more detail in an upcoming post on how the Combat system works. Each PC can take a number of Bumps each to their Athletics Attribute.
XP: Experience Points exist in this system to improve your Character as well as your Franchise. XP are received at the end of each Case. Usually the GM will award between 1-3 points. For particularly epic Cases or actions on the part of the PCs, as much as 5 points may be given. The XP are applied as follows:
To raise an Attribute requires 5 XP x The number of dice you are trying to achieve.
If you want to go from an Athletics of 2 to an Athletics of 3 you would need to spend 15 XP.
To raise a Signature Skill requires 1 XP x The number of dice you are trying to achieve.
Imagine you have an Academics of 3 and the attached Signature Skills of The Occult 5 and Quantum Mechanics 6. You want to raise The Occult to 6. That would cost 6 XP - 1XP x the goal of 6 dice.
As of now I can not decide if I want PCs to be able to increase Additional Skills or how much they should cost. I am also entertaining the idea of being able to add new Additional Skills after Character Creation. Please let me know what you think.
I'm going to stop there for now and pick up next time with an explanation and breakdown of Franchise Dice, what they are and how to use them. Also, how XP can be used to upgrade your Franchise!
Sorry to those who might not be into this subject but I don't do things I enjoy only half way. It's Obsess or don't bother.
AD
Barking Alien
Posted by Adam Dickstein at 10:54 PM