What follows is a explanation (to some degree) of Ghosts in the Ghostbusters universe as it applies to my RPG campaigns. This is my personal head canon and not entirely in line with the official canon which has been somewhat inconsistent. This is my way of rectifying the discrepancies.
The information is therefore a mix of film canon, notes from deleted scenes, early drafts, unused concepts, the original West End Games Ghostbusters RPG, the Real Ghostbusters animated series, and the IDW comic book series. I developed it further from my own research into Ghosts and other paranormal phenomena, the 'art and making of' books for the Ghostbusters films (including Afterlife), and other creative ideas. 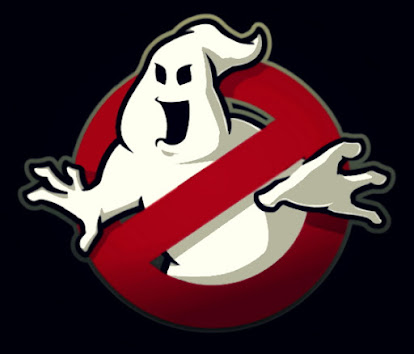 Alternate Ghostbusters Logo
By Julia_CaSsian
Ghosts are supernatural phenomenon in which Psychokinetic Energy (PKE) collects around an 'otherworldly' presence brought into existence in our dimension by as yet unclear means. This occurs as a result of intense thoughts or emotions, though there are other reasons they may form. Parapsychology has some understanding of the situation, yet truthfully we only know a fraction of what there is to know about the Supernatural.

"Sir, what you had there is what we refer to as a
Focused, Non-Terminal, Repeating Phantasm or a Class V Full-Roaming Vapor.
Real nasty one too."
Ghosts and other supernatural entities are identified using the CDI System, which stands for Classification, Description, and Intensity. The CDI System does not denote a paranormal phenomenon or being's 'power level', though it may inform it. A Class VII entity will always be far more dangerous than a Class I but two entities in the same Classification can be very different in terms of threat.
Both 'Slimer' and 'Muncher' are Class V Vapors; one is (initially) Full-Roaming, can slime you, and makes a mess of the kitchen while the other is Free-Roaming, can bite through steel, and vomits a hail of metal bits like a Gatling gun. Not all Phantasms are created equal. 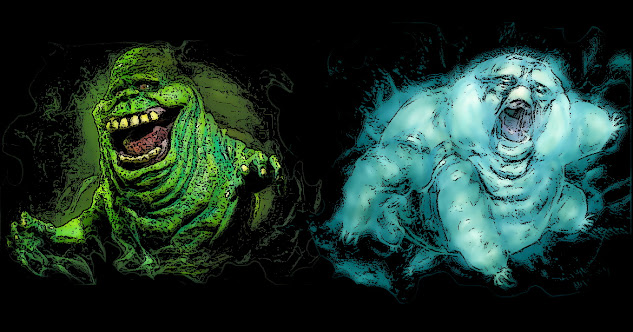 Various accepted authorities and sources on the paranormal use vastly different terminology for the same states of Intensity, creating the need to update this element of the CDI System fairly often.
OK, whew.
I am pretty proud of this post but I have also been working on it for days. I am going to get some rest and then go on to give you the game mechanics behind all this talk of ghosts.
After all, I ain't afraid of no...
AD
Barking Alien
Posted by Adam Dickstein at 10:45 PM