I know I keep mentioning that a ghost's CDI Identification doesn't directly correlate to the ghost's level of threat. Sure, the most powerful Class I Mist will never be as dangerous the weakest Class VII Corporeal entity but within a given Class or Intensity things can vary wildly.
The reason for this in game terms lies with Supernatural Abilities and Conditions, Limits, Weaknesses. 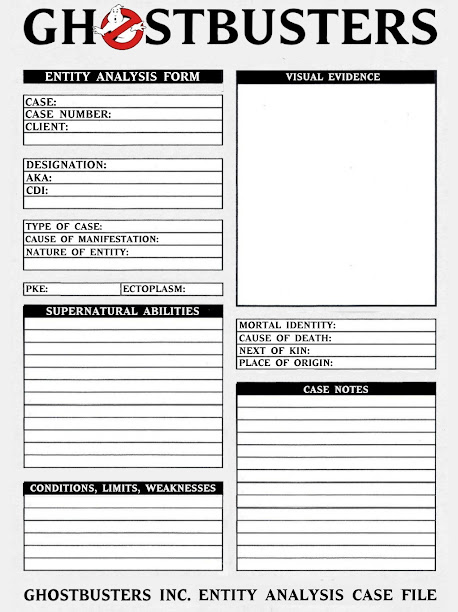 To assist me with my explanation, I'm going to call on the help of three ghosts: The Librarian Ghost, Captain Warms, and The Missing Man. 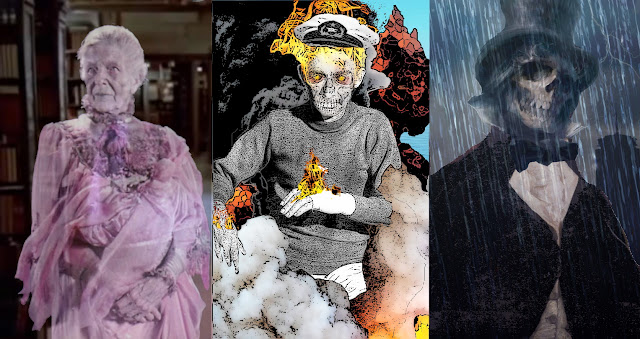 The Librarian Ghost, also known as The Grey Lady and The New York Public Library Ghost, is a Class IV Anchored Full-Torso Repeating Phantasm, although she was initially identified as Class III. The Librarian is the first ghost ever encountered by the original Ghostbusters team in 1984, prior to the company being established. It was sometime later that Dr. Ray Stantz and Dr. Egon Spengler researched her manifestation.
As it turns out, she is the ghost of Librarian Eleanor Twitty murdered by her supposed boyfriend in March of 1924. The killer seduced Miss Twitty in order to gain access to a rare selection of books, including many on the subject of the occult, that Miss Twitty happened to be in charge of. When she realized her suitors true intentions and confronted him he murdered her in cold blood.
The Librarian Ghost haunts a fairly large though specific section of the New York Public Library. She can not leave that area and rarely manifests visibly except within an even smaller area. While capable of moving objects with Psychokinesis, her main ability is being able to transform into a terrifying, monstrous image that induces a feeling of panic (fight or flight with flight far more likely).

Captain Warms, aka The Fire Ghost, The Burning Sea Captain, and the Burning Ghost of the Morro Castle, is a Class IV Anchored Full-Roaming Triggered Repeating Phantom. His PKE is tied to a group of artifacts from the ill-fated SS Morro Castle, an American ocean liner that suffered a fire at sea, ran aground, and was abandoned. The incident cost the lives of 137 passengers and crew.
The ghost of Acting Captain William Warms is connected to the items recovered from the ship and can manifest anywhere the items are placed (Anchored) but if said location is in the lobby of a hotel for example, Warms can move freely about the entire hotel (Full-Roaming). He is considered a Triggered Repeater, meaning he will manifest in the region of the artifacts when someone begins discussing the deadly incident aboard the SS Morro Castle and especially if the tragedy is blamed on Warms and/or the negligence of the crew.
As a Fire Ghost (a specific type of ghost known to cause fires) Captain Warms can cause inorganic matter he passes through to ignite. While people won't go up in flames when he passes through them, their clothes will. He can also release a blast of extremely hot air (like a backdraft) and surround himself in an aura of fire and thick smoke. Rarely, Captain Warms will erupt in a burst of flames himself but after doing so can not rematerialize for a few minutes (rounds - see upcoming post on Combat). Warms often appears with three other Class III 'sailor' ghosts though not always right next to them. Rather, when he appears the three of them are likely also somewhere in the vicinity. 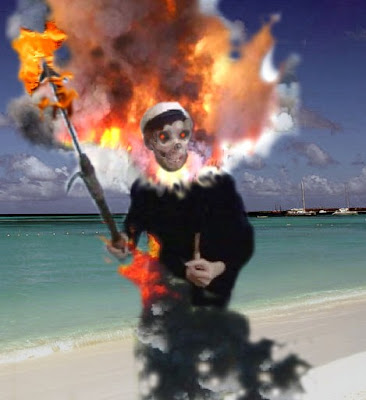 The Missing Man, aka The Stormbreeder, is believed to be the ghost of one Peter Rugg, a man of means who perished in a terrible storm in Massachusetts in 1770. There is some disagreement over whether this entity is Class III or Class IV, as the identity of Peter Rugg may be that of a fictitious individual related to local folklore. Ghostbusters Boston classifies it as a Class IV Conditional Non-Terminal Free-Roaming Phantom.
The entity gets the name Stormbreeder from both its legendary origins and its current abilities. A well-to-do man known for his good manners when calm, Rugg was a swearing, aggressive prat when angered, which was supposed often. When it was suggested he spend the night with friends to avoid the treacherous roads one stormy night, he cursed an oath at the weather and road off with his daughter never to be seen alive again. Periodically, during particularly heavy rain storms (Conditional - Only appears during heavy rain storms), The Missing Man can be seen on suburban roads all across the state of Massachusetts politely asking for directions to Boston. If not given the information he desires or if people react poorly to his horrific appearance, The ghost will curse at those he encounters like a drunken sailor and the storm will get noticeably worse in the immediate area.
Even if you do tell The Missing Man how to reach Boston, he never seems to be able to get there, getting lost somehow, which only makes him more irritated. In addition to some control over the weather he can cause lightning to strike a given target, though he can not hit the same exact location twice. The lightning is followed by a disorienting boom of thunder. When riding in his horse drawn wagon (see below) he is remarkably fast, easily able to out speed most conventional ground vehicles.
The Missing Man always appears with a smaller Class III ghost that resembles a young girl of roughly 8-10 years of age. According to legend this is Rugg's daughter but the ghost shows few signs of a distinct identity (hence it being given a Class III Identification). On occasion, Rugg will be driving an 18th century wagon (Class IIIs) pulled by a black horse (Class VI). 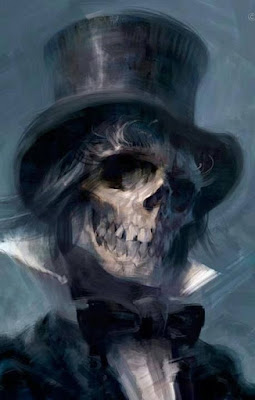 Here we have three ghosts, all Class III or IV, with very different sets of powers and ranges of mobility.
The Library Ghost is stuck to a particular section of the New York Public Library, can move objects around, and transform into a frightening image.
Captain Warms can appear wherever artifacts related to his death are located, travel some distance from them, blast heat, burst into flames, and set items on fire.
The Missing Man can travel anywhere in Massachusetts outside of Boston's city limits (although not outside the state), summon storms, and target people and things with bolts of electricity from the sky.
The same or similar Classes, the same or similar Intensities but VERY different capabilities. In fact, their write-ups would probably look something like this:

Next to each Supernatural Ability is the number of Action Dice rolled when that ability is used.
In the case of offensive powers, a Success indicates a hit with additional Successes causing more damage. Terrifying Visage adds +1 Stress Dice to each PC (and living NPC) present per Success and an immediate Panic Roll is required. Adjudicate the results as previously described for a Panic Roll. The following round everyone goes back to their prior Stress Dice +1.
In the case of defensive powers, roll the Ability's Action Dice. Each Success adds +1 to the number of Successes a Ghostbusters needs to hit or trap the entity. Use the theme of the ghost and your imagination to explain why this occurs. For example, it is difficult to get a clear shot at The Missing Man through the driving wind and rain he summons. It is hard to get close enough to Captain Warms to drop a trap with his intense Flaming Aura.
Some abilities have very specific effects that might not be directly damaging but cause problems nonetheless. Captain Warms Backdraft can not cause Bump Damage (explained further in my upcoming Combat post). It can hinder a Ghostbuster's Attributes or knock them backward. Successes after the first either send someone 10 feet back or cause 1 Die of Attribute Damage.
Also, regarding Slime: All ghosts from Class III to VI can Slime people. Class II ghosts can leave Ectoplasm on rare occasions, usually with some effort. It is rare for Class VII's to Slime as their Ectoplasm is of a very different nature, consistency, and construction. Intensity wise, Mists to Masses are most likely to leave Ectoplasmic Residue, though on rare occasion a slime coated Corporeal/Undead can as well.
What happens when you're Slimed? Stay tuned...
On the sheets I keep for my own records I have notes on various Supernatural Abilities and what they do, not to mention specifics for each entity. As a result, my version of the Librarian Ghost just says 'Terrifying Visage 5D' but lacks the explanation of how it works. That's for your benefit as I already know what I mean.
OK, that's it for this one. Got the big Combat entry coming up as well as two other posts, one related to this project (kind of) and the other related to what I am gearing up for next year.
See ya soon,
AD
Barking Alien
Posted by Adam Dickstein at 2:13 PM