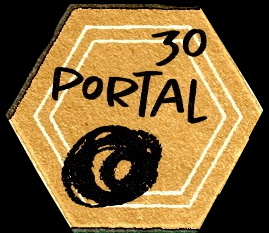 Good grief! Can I organize your prompts next year? Why oh why wasn't this one of the first words? A portal is something that can lead to infinite possibilities. Wouldn't that be a great way to lead us into the RPGaDay event? Through a PORTAL maybe?

Portals are rarely a thing in and of themselves. It's where the portal leads that is the interesting bit. What can we do to make the portal itself interesting?

Here are some quick, off the cuff ideas:

A Stargate-like archway consisting of two interlocking 'rings' that each have different symbols on them. The destination of the portal relies on which symbols line up together. Neat. Now what happens if you turn the dial so one of the rings comes up blank? Basically, a part of the ring between two symbols falls into place with the other rings showing symbols. What if two of them are 'betweens'? Does this send you outside of normal space-time?

Picture a similar device but smaller, perhaps hand-held, with each individual holding what amounts to an old school telephone dial.

In the novel series The Long Earth by Terry Pratchett and Stephen Baxter, travel to parallel Earths is possible by use of a relatively simple device known as a 'Stepper'; essentially a wooden box with copper wiring, a potato as a power source, and a single lever. One end of the top of the box is marked 'East' and the other end 'West'. Switching the lever to one of these two 'directions' sends you to another Earth.

A conceit in the books is that we in America tend to push and travel 'West', while those in Asia tend to go 'East'. It isn't until much later that someone considers the possibility of 'North' and 'South' directions. After completing the five book series I wondered about going North-East, South-West, and the like.

What about Warp Gates or Jump Gates (the Tannhauser Gates of Blade Runner fame), massive structures that open artificial wormholes enabling ships to travel faster-than-light from one such portal to another. The Mass Relays of Mass Effect function this way.

Imagine if the sending relay or the receiving one is damaged due to a malfunction or exterior attack while your ship is in between gates. What happens? Are you lost, barreling forward through a hyper-luminal otherspace for all eternity? Perhaps instead you drop out of 'Gate Space' between your previous location and your target and must limp along to the nearest star system using conventional thrust or lesser FTL engines. Who built the Gates? Was it Humanity or some ancient, precursor species? How does such a technology, which might be far beyond our complete understanding, even suffer a malfunction? If it does, can anyone alive at this time repair it?

In my Winghorn Guard / D&D-But-Not universe, Circle Magic - the mystic art of drawing or etching magic circles and symbols for various effects - can be used to create portals of both the travel and summoning variety.

Like many aspects of magic on the Winghorn Guard world of Aerth, altering any portion of the mystic rotes or patterns can change the results of your magical endeavor, from helpful to surprising to absolutely catastrophic. What if you made the circle with sand, water, or some other element of the location you mean to travel to? That should make it easier or faster, no? What if you make the circle in the dirt with a stick (wand, staff, or rod) but then pour the blood, venom, or melted fat of a creature able to teleport into the grooves? The possibilities are endless!

That's it for now.

Last one coming up next...