Have I mentioned how Superhero-y August has been? 'Cause it's been DAMN Superhero-y.

This month, in addition to all the Supers gaming I've been doing and working on, two Superhero programs came out on two different internet streaming services no less! 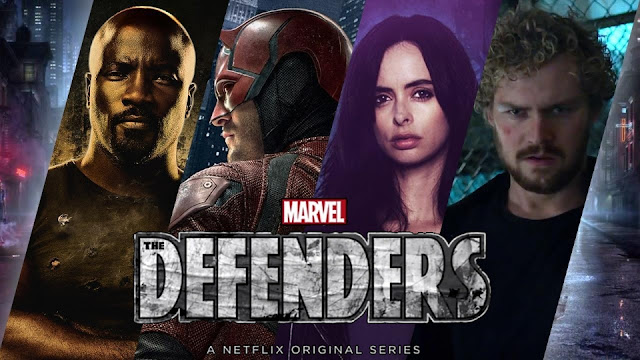 Marvel's Defenders is the culmination of the various Netflix series they've produced so far, featuring Daredevil, Jessica Jones, Luke Cage, and Iron Fist, teaming up together to battle an evil that effects them all, and the city they love.

Each individual character, and their shows, had their specific strengths, and weaknesses, with some having more than others.

I really enjoyed The Defenders, but because all the characters were not created equal, or at least written, acted, and produced equally, their flaws really show when they are combined together. In a nutshell, the fact that Daredevil, and Luke Cage are so awesome makes the already weaksauce Iron Fist look even worse by comparison. Jessica Jones is a special case for me, and I will go into her dynamic more as I go on.

While the story of Matt Murdock seems to take a time jump, resulting in a bit of viewer disorientation continuity-wise, I found Cox's portrayal of the blind, martial artist vigilante, The Devil of Hell's Kitchen, to be as on-point as ever.

So compelling is Daredevil that he creates one of the key issues with the series. We find Matt Murdock, his enemies, supporting cast, his world, to be the focus of what should have been more of a team/ensemble cast series.

Although allied with three other individuals, it is his enemies they are fighting (The Hand), his mentor that provides assistance and exposition (Stick), his ex-girlfriend who is the x-factor (Elektra), and even his friends who are the most competent normal people we see (Karen Page is a better detective than any of the cops. Foggy gives some of the best advice, personally, professionally, and for the plot).

Daredevil is also clearly the most interesting combatant to watch in a series with a lot - sorry, A LOT - of fight scenes.

The problem here is we end up with a show that could have been called 'Daredevil and Friends - And also Iron Fist'. Daredevil's cool factor is higher than his co-stars by a good deal - a great deal if you count Iron Fist.

I am far more jazzed to see a Daredevil Season 3 then I am a Defenders Season 2 and I liked Defenders. I just feel like I liked it for two of the characters and there happened to also be two others for some reason.

I loved the Luke Cage series, warts and all. It wasn't perfect by a long shot but it was good, classic 1970s comics meets modern storytelling and it worked for me. The music, Harlem, they were all characters in the show as interesting and alive as Misty Knight and Cottonmouth.

The King of Coffee returns here, with his stint in jail behind him, and his desire to help people fully intact. If any of the characters in this series could be called a Superhero, it is Luke Cage. He is the good guy trying to do what's right. He doesn't want to kill the bad guys unless he has no choice and he will not endanger civilians. Honestly, he's almost on the wrong show.

My big disappointment with Luke in this series isn't really with Luke Cage at all. It's the characters around Luke Cage. Claire Temple, 'The Night Nurse' is great, played with real humanity by Rosario Dawson. She could read a computer programming instruction manual and it would seem heart felt and honest. You read that manual girl. Keep it real.

Everyone else...ehhh. Misty Knight is still not the Misty Knight I was hoping for, though she comes close a few times. Mostly, lazy writing gives her little to do but make you wonder why she hasn't been fired. I was expecting more drama, more...something...between Luke and Jessica Jones. Luke and Danny...ugh. They have just about one moment, maybe two, but the chemistry just isn't quite there. The Danny Rand of Netflix is not ready or worthy to form Power Man and Iron Fist.

OK, I know I am going to get flak for this, but I didn't like the Jessica Jones series.

My favorite part of it was the villain and Luke Cage.

She's here, in this show, because...because...she had a show on Netflix. I don't feel she served any purpose being there. She had a case that connected to it (thank the writers!) but she didn't believe anything super-normal was going on up to and often after seeing it in action. She wasn't connected to any of the villains personally, didn't have chemistry with Danny (but seriously, who could?), and seemed only roughly aware she'd previously had a relationship with Luke. She did interact well with Matt, which was nice.

I like the actress a lot. I like the comic book version of the character. The Jessica Jones of Netflix is an unlikable person, who isn't a hero, and isn't trying to be. Sorry, but I'm an old school Silver/Bronze Age guy. That's not what I want from my supers.

The weakest link in the Marvel Netflix shows is without a doubt the character of Danny Rand, the Iron Fist. He remains the weakest link here as well, as he brings the show down every time we are forced to focus on him as if he is important or something.

Even if the actor weren't so flat, the character so poorly written, his martial arts so awkward and slow, he would still be the low point of the series. Why? Because everyone is better at what he does than he is.

Daredevil is a far superior fighter, Luke Cage often seems stronger and Jessica is way smarter. All of them have more emotional range and are more believable in their parts. Even Colleen Wing, who is an odd character in her Netflix incarnation, is more compelling when she emotes. She takes this all personally in a way that you believe, unlike Danny's lip service about his duty to K'un Lun.

Danny, you left, it fell, everyone's dead. You are a loser Danny Rand. Stop saying you're the Immortal Iron Fist to everyone. You're not. You're the latest one, so they're not immortal. You are also REALLY bad at it.

Now, remember how I gushed over the awesomeness of Cox and Matt/Daredevil? Well, the biggest problem with Iron Fist in the Defenders isn't that he sucks (though he does). It's that he sucks at everything Daredevil is great at. This makes Daredevil look cooler than he already is and Iron Fist look even worse.

Why? It's because we like Daredevil and Daredevil is enjoyable to watch. The focal points of this type of series, such as the main villain, the mysterious ally, the history - as I noted before, that's all Daredevil's.

Side Note: I was really hoping that Stick would reveal the reason he and the Chaste wanted Matt to join them so badly is that they were going to send him to K'un Lun to fight the dragon and take its heart. Basically, why is Daredevil so much better than Iron Fist? Because Matt was supposed to be the Iron Fist. (Hmm. Cool alternate Marvel universe idea - Matt Murdock - The Immortal Iron Fist!).

In conclusion, I'm not the biggest fan of street-level superheroes. As a kid, I never read Daredevil, Punisher, and only read a few Power Man and Iron Fist comics. That said, the two season's of Daredevil and the first season of Luke Cage were so good I got excited for this. As it turned out, I liked, quite a bit. I would have liked it more if they had left out Iron Fist and done a Daredevil and Power Man team-up show. Still and all it was fun, had some cool fight scenes, and I'm interested in seeing more from Marvel Netflix in the future.

Boy I don't like [the Netflix version of] that character.