I know I'm a day late with this, but the hands of destiny did a check up of my private parts, and I found her hands much too cold!

Yes, I swam for the surface of justice, came up a little short, and took a mouthful of salty villainy. Nonetheless, I've since spit out the waters of evil, and I'm ready to freestyle swim to the shores of heroism to give you my opinions on... 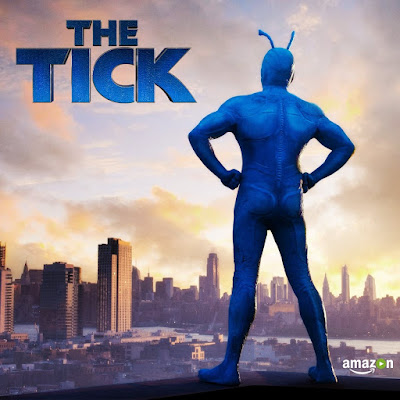 I could easily do a Thorough Thursday entry about The Tick, who I've been a fan of every since his comic book first debuted in 1986. I collected it thoroughly for a while, but eventually lost track of it when I stopped buying comics regularly during the 90s.

I was/am a fan of the animated series, and enjoyed the first live-action sitcom featuring Patrick Warburton in the title role.

This series is a very different take on the Tick, and his world, though at the same time it doesn't feel wrong. It feels like the Tick grew up, put on his big boy blue pants, and said, "Hello Today! I'm back, and better than ever!" It's the Tick we all know and love, augmented with a new, fresh, lemon scent of righteousness. 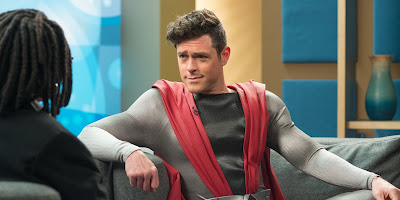 Superian being interviewed by Whoopi Goldberg.

Yes, there is obvious exposition, but that's not what I'm talking about. I'm talking about how some of the characters have an implied past together beyond the past we know about. I'm talking about how Superhero genre things just sort of happen in the world, mentioned nonchalantly on the evening news. Sometimes those background elements cross paths with the story itself, sometimes they don't. That's awesome! That reminds me so much of my buddy Will's Champions campaign. It was one of my favorite features that few GMs manage to pull off.

The second major thing the show has going for it is the casting.

Griffin Newman is fantastic as Arthur, though it is a somewhat different Arthur from what we've seen in the past. While neurotic, he is a nerd, not a nebbish, and is almost manic in his desire to either get out of the situation he is in, or to pursue his beliefs. He reminds me of Elijah Wood's Todd Brotzman in last year's 'Dirk Gently's Holistic Detective Agency' series from the BBC. That's a compliment, because although they are similar characters, you expect Elijah Wood to pull it off. I was not familiar with Newman before this, and he's good at the part. Really good.

In fact, this is an Arthur who is clearly the real star of the show. The Tick is a plot device, and side character who sets the tone, and gets things moving, but the depth of the story, and the way it is told owes everything to Arthur.

That said, Peter Serafinowicz is AWESOME as The Tick. It's like watching Patrick Warburton play Adam West playing The Tick. Additionally, there are some subtleties in his facial expressions that convey a great deal of characterization and humor that are all his own. I was really impressed.

Of the other characters, all are cool, but I am totally in love with the villainous villainess Ms. Lint. Portrayed with incredible talent by the absolutely beautiful Yara Martinez, Lint is terribly evil, and at the same time very Human, and funny. Kudos to Ms. Martinez for getting this character to really come alive.

I don't want to keep gushing, but really the only complaint I have about the series is that it's only 6 episodes in length. I was crushed when I realized I had just watched the last episode.

How much did I like this show? Well...I've mentioned before that I don't binge watch shows like many people do. I can't. It just isn't in me. I watch a few, then a few another night, then skip a day, and watch the rest. The more I like a show, the more episodes I can watch in one sitting of course, but I still space them out.

Watched The Tick in one day. All of it. Amazing. I am amazed at myself. I really liked it. Last show I even came close to do that with was Stranger Things, and that still took me a few days (granted it's a much longer series). 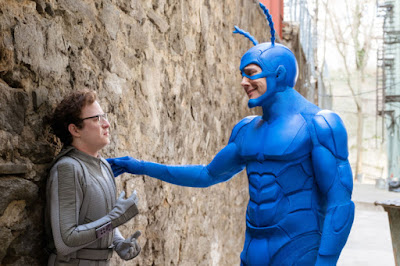 OK, one tinsy, weensy, minor complaint. The Tick never yelled out his trademark battle cry. Boohoo! I bet he will next season.