OK, the first question was pretty simple. I feel we're off to good start.

An RPG I'd like to see published? That isn't being published? I mean, are there RPGs sitting there like that Bill from Schoolhouse Rock waiting to become a Law? 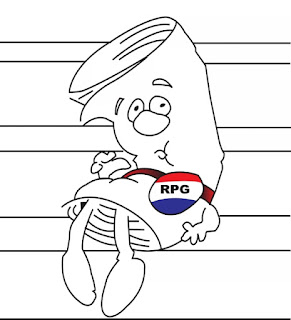 Perhaps that isn't what they mean.

I'm thinking what they're asking for is what game that doesn't exist, should.

What game needs to be made? There's a new Star Trek game already, though I will still be using the Last Unicorn Games version when I run Star Trek. There's a Star Wars game on the market, but again, I'll use the old West End Games D6 system when needed. Marvel? I've got Champions, and Mutants & Masterminds. DC? The M&M 3E version works great.

A new edition of Mekton would be nice. They kickstarted a new edition a while back, successfully I might add, and someday we might actually see the results of that endeavor.

Beyond that...you got me. I got nothing. There is literally nothing I want, or need that I know of.

That I know of. That's key.

Do something new. Something interesting. Tackle a subject that hasn't been tackled, a genre that hasn't really had a game (Tales from the Loop does this).

Maybe reboot a game that was previously a failure, but had at its core a great idea (Cyborg Commando, Mach: The First Colony). Maybe an update of a fun game that never reached a wide audience (Hunter Planet). Make a game I didn't know I really wanted but do, like...like...well if I knew...

That's all I can say on the subject.