This Saturday, the 9th of February 2013, we played Traveller
. 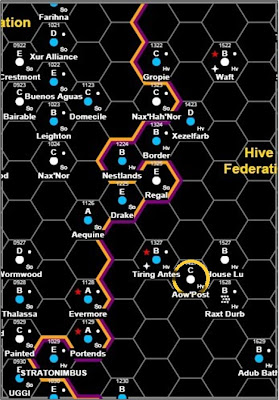 And it was good!

OK, it was better than good, it was pretty damn awesome.

Let's start with the players...fantastic, each and every one. The winter storm here in New York prevented the entire cast from being there for the first episode, yet I think we got the best possible mix of people for a first session that we could have hoped for. It was a nice combination of proactive players, reactive players, role players and just a bunch of cool guys.

The game would've been very different without the inclusion of this Solomani Female Diplomat, 38, with a cargo hold of bitter demons in her past and a determined vision of her immediate future. She has a goal and it is both simple, distinct and not what it seems.

As the other characters followed the traditional path of going to the spaceport bar and talking to the in-the-know bartender/owner (more on him below) to see if there were any jobs available, they were hired, one by one, by Ms. Hosta! Will's PC started the game with a definitive goal and good deal of cash from Mustering Out and could afford to hire what she needed for her personal mission. A PC Patron in the first session! What did she need? A pilot with a ship, a decent navigator, some bodyguard muscle and at least one person with considerable military experience. It just so happens she found...

26 year old JayZed is a Solomani Human, formerly of the Imperial Navy. He served only 2 terms after leaving the iceball moon he called home and where his family still live and work as Helium3 gas scoopers on the Gas Giant their moon orbits.

Young, still a bit naive and trying to maintain his military discipline, JayZed was played as someone with skill and intelligence but largely out of his element unless dealing with his specialties of Sensors, Navigation and Engineering. He was quickly hired by Hosta for these skills as well as his military background. It seems he also worked on sensor arrays and was stationed on a Patrol Cruiser.

Hosta wanted to travel to a planet now considered a Red Zone and was curious as to whether JayZed was familiar with how often the Patrols might pass by said planet and what they would consist of. When JayZed seemed disturbed by the question, Hosta indicated she was merely curious as to what level of information the young man had been entrusted with by his Naval superiors.

Ed was a great addition to the group, not just because he's a really good player but also because he is the only Traveller veteran other than myself. As such, he was able to help me subtly reinforce elements of the setting. At one point for example, Hosta was talking to an alien pilgrim whose spiritual nature seem to give him almost divine insight. When she asked the alien about what he saw us encountering ahead, JayZed was all aghast, saying he didn't sign on to get involved with any Psions (Psionic people and powers are traditionally loathed and feared by most citizens of Traveller's canon Imperium). Hosta calmed him, saying that no one said anything about Psionics. She simply felt the alien was very intuitive. Nicely done.

Doctor Fujikawa, a 38 year old Solomani Male whose careers include Scientist and Scout, was the owner of a Laboratory Ship with no set destination or manifest according to Hosta's contacts, the Highport Dockmaster and Quartermaster.

Emil, travelling with his assistant Maria (whose voice was heard over the communications system but has yet to actually be met by the PCs), described himself as 'between research projects'. Hosta decided to hire the fellow for his ship and piloting skills. Something of an 'Action Scientist', Emil looked forward to the opportunity, especially when offered 10,000 Credits for the roughly two-month long mission (a month or so to their destination and back to Bussard Reach Station, an orbital Highport above the planet Leighton).

As an additional incentive, Hosta haggled with the owner of a Junkyard/Salvage Shop onboard the station for some used Grav-Speeder parts and had them delivered to Fujikawa's ship. Noting that the Doctor was a tinkerer of sorts (the two of them actually met in the Junk Shop), Hosta figured it would be a nice gift for Fujikawa and it would net the party a transport vehicle on the cheap if they built it themselves. Combining his skills with JayZed's, the two men got to work on rebuilding/kitbashing what turned out to be an old Police Speeder.

Rex is a 34 year old Solomani Male formerly serving with the Imperial Space Marines and Imperial Army Aquatic Division (Marine/Sailor). He has incredibly good stats and so Marcus cooked up a backstory that explains his high attributes resulting from a 'Super Soldier' style genetic engineering project. As it turns out, the scientists involved were largely Solomani, as those Earthers have a history of 'geneering' people.

Ad libing the fact that his previous mission went a bit sour, Marcus had Rex eager for more work ASAP. He met with Hosta and was hired as a bodyguard, indicating his military experience would come in very handy. One of the funniest exchanges during the game involved the classy, clever Hosta talking to the Down and Dirty, street tough Kincaid.

Hosta: "Do you have any experience taking a bullet."

Kincaid: "Well, not so much taking a bullet...more like giving them."

As Marcus is prone to do, he set himself up a little side trek during the session in which he met with a Vegan Scientist/Doctor to analyze the exact nature of his genetic enhancements. He learned that hidden deep in his DNA are elements of Zhodani DNA, the Psionic Human variant race that are viewed as the enemies of the Imperium. Curious to unlock the potential this revelation might point toward, Rex paid the Vegan to give him the name of a researcher who could help further. The money also included a fee to erase the scans the Vegan had just made.

Secrets upon secrets...which brings us to...

Jeff. Ah Jeff. Good to have him back. His character is 'Kale', a mysterious man with a mysterious past that I can only begin to tell you about since very little has been revealed in the game. I know his deal but the other PCs don't and I don't want to spoil it for him or them.

Visually, Kael is a large and muscular man in his mid-to-late thirties who is likely of Solomani or mixed Imperial decent. Kael is first encountered bumming around the station with the alien pilgrim, a Thorellian vagrant named Berell ThirdTurnFromTheSky. The two of them mostly talk philosophy and discuss the difficulties facing the Thorellian people. A combination of their unusual biology, their religious beliefs and access to space travel has sent them far and wide and resulted in the decline of births on their homeworld. If the issue is not resolved, sophontologists (those who study sentient cultures) believe the Thorellians will be extinct within 100 years.

Feeling fate has brought them together, Kael follows Berell as he investigates a rumor of more Thorellians on a colony world two months travel time from Bussard Reach station at Jump-2. It just so happens a Lab Ship is heading in that direction. When the two arrive at Fujikawa's vessel, the cargo bay doors are found to have been left open after transporting the Grav-Speeder parts aboard. The men stowaway on the ship and hide in the Engine Room.

The whole thing, rumor of Thorellians, the cargo bay door, etc. was part of a scheme by Hosta to get the alien aboard. Kael was an unexpected addition. See, earlier in the game Hosta had used her skill at Forgery to fake a flight plan that would indicate we were lost if anyone tried to prevent us from getting to the planet she is looking to go to.

She did not inform everyone of this plan but now, once the stowaways are revealed, Hosta gives out the details on her plan. If stopped, they are a Cultural Research Group doing an independant study on the Thorellians in an attempt to understand and help their situation. Want proof? Sure, here are the documents and we have a Thorellian on board.

Sooo schemey! But wait, what is her real plan or purpose for this mission. Are there actually any Thorellians where we're going? Why is the bartender from the station coming with us?

Great Gurvin! I told you all about the characters but not the story. Argh!

Posted by Adam Dickstein at 9:10 PM