More Than Not Half Bad

With the plethora of Fantasy Role Playing Games that have been and currently are on the market, surely I can't dislike them all. 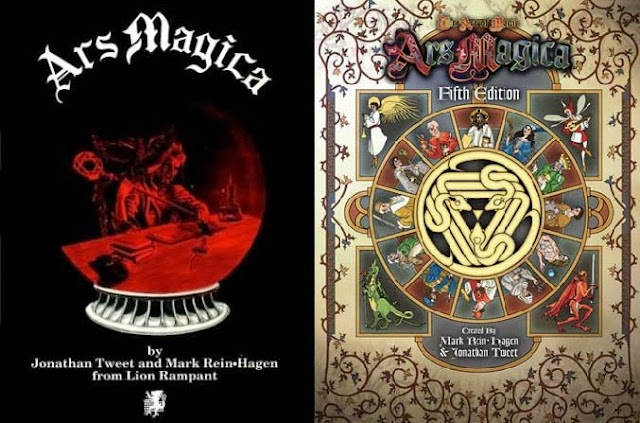 If there is any one dedicated Fantasy Game I can actually say I like, I mean really and truly like, it's Ars Magica.

While I probably play the game largely badwrong from a traditional standpoint, there is a lot to like in this game even in it's original Before-Adam-Screws-With-It form.

For those unfamiliar with it (and what a travesty that would be), Ars Magica is a fantasy-historical game set in 'Mythic Europe', a medieval Europe where magic, myth, legend and folklore are all very real.

Originally published in 1987 by Lion Rampant (cover shown above left), the game has been updated several times with the 5th Edition (above right) having been released in 2004. The game uses an unusual system (in that there are not many other games exactly like it) in which, when a common action is performed, one of the character's attributes is added to their rating in an appropriate skill and a d10 is rolled. The total achieved is  then compared to a target difficulty number. The action succeeds if the total is equal to or greater than the difficulty.

Now, in some cases, instead of a common or 'Simple Roll', the Player may need to make a 'Stress Roll'. A Stress Roll is called for when there is a likely chance of exceptional success or failure. In that case, results of '1' and '0' follow special rulings. A One is rerolled, and the result doubled (additional '1's lead to successive doubling: x2, x4, x8, etc; the final non-One rolled being enlarged by the multiplier. A Zero on the other hand is treated as a zero (instead of a ten) and one or more additional d10 'Botch Dice' are rolled. If any of these Botch Dice come up a zero, the character has suffered some kind of critical failure. If no zeroes come up, simply treat the original zero as the roll, i.e.: don't add anything to attribute + skill.

It is really the Magic System of Ars Magica where the game shines and while I don't want to go into it here (as that would take a while) I highly recommend reading up on it. It allows for both flexibility and practicality and overall has some of the best atmosphere I've seen in a (semi-traditional) fantasy role playing game.

I have simplified some parts and tweaked others and the end result has been a game that past players and I have really loved. I ran a campaign of it not long ago and while a lot of fun, it wasn't really what I had in mind. Aside from being very political and touching on a number of historical events, it was really just a game of Dungeons & Dragons with a cooler rule system. It didn't have the feel or genre elements I wanted it to have and intended to add in. I am not sure why exactly. Somewhere along the line I think I let the players dictate the style of play too much which caused me to shift my attention toward intrigue and warfare and away from folklore and legend. 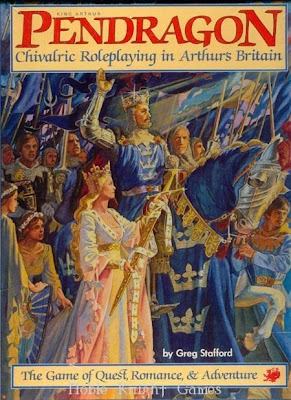 Another quasi-historical, mythic European game, this one based, nay embodying, the majesty and beauty of the Arthurian legends.

I could hardly do justice to an explanation or review of this game that is better than that which James Maliszewski of GROGNARDIA gave on the 5th of May in 2010. I whole heartedly share his enthusiasm for this game.

Now the truth of the matter is that this is one of the few games in my 36 years of gaming that I have played and never run. That's unfortunate but perhaps a blessing in disguise. While very familiar with the story of King Arthur, his Knights of the Round Table and the Kingdom of Camelot, I am by no means an authority or even a fanatic. I forget names. I get some of the Knights mixed up on occasion. I am certain the 'timeline' of the story events in my head is quite off.

I wonder how hard it would be to port this game over to an original world or a world of vaguely Western European themes and style but one which would never pinpoint or identify the nation, ruler or era. More about this idea in an upcoming post.

This game does one thing very right for my purposes; The feel of the setting is built into the rules. Perhaps my biggest gripe with Dungeons & Dragons is, as noted in my previous post, the game's mechanics feel technical and almost scientific. There is little if anything in it to reflect the heroic, romantic or epic mood one gets from reading Lord of the Rings or Le Morte D' Arthur. With their system of Traits and Passions, each Knight has a drive and a set of personal elements that help or hinder his personal quests and goals. Add in the idea that you are expected to hold land, wed, have children and perhaps play them later in your tale reinforces that impression of campaign at literary epic. I love that.


Um...yeah. That's it. Thanks everyone for coming. See you next time when...

"Wait! Hold on there buddy. That's it?! Two? There are two Fantasy RPGs in the history of Fantasy RPGs that you like?"

OK, yes, maybe there are a few more but really, most of them are...special cases.

Well, I like Sword World from Japan, the Studio SNE RPG originally based on the Manga and Anime studios own Dungeons & Dragons and Runequest campaigns. They eventually developed their own system, which over the years has become one of the most popular in Japan.

Honestly, Sword World is very D&D like but there are a lot of things about it that I believe Sword World does better than it's American cousin. Classes seems more interesting, they are designed to be mixed and matched if the Player wishes in order to create a much wider range of character options.

I like their magic system better as it has a lot more atmosphere and, quite frankly, D&D's magic system is among my least favorite elements of the game. How can you have a game with Wizards and Magic Items and have your magic system be so, so, bleh. Grrr.

I also like a lot of the ideas in White Wolf's Mage: the Sorceror's Crusade. Granted, I am not a huge fan of the system (though I don't hate what you can do with it with a little modification) and it is somewhat like a stepsister to Ars Magica but still, its got some cool stuff in it.

Lastly, Faery's Tale Deluxe deserves a mention, though it isn't really a Fantasy RPG in the sense of many of the others. Perhaps that is why I like it so much.


Well great, I am no closer to figuring out what I want to run. All I know is there is a lot I don't like, a few things I do and unfortunately, I don't own too many Fantasy games to look through for inspiration.

Ogawa is best known for his work on the comedic animated series Crayon Shin-chan (aka 'The Craziest Show on TV') and his animation direction on Grave of the Fireflies, (aka 'The Saddest Film in Cinematic History'.)