Before getting into my project(s) for the NaGaDeMon challenge, I wanted to do an update on my Traveller campaign, as we completed Session #15 this past Saturday. 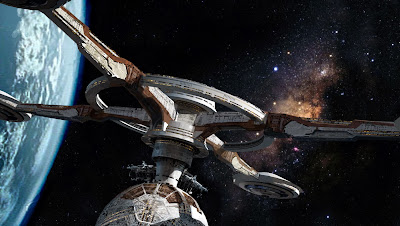 Far
We've been travelling far
Without a home
But not without a star
This remains one of my best campaigns in a long time. On a scale of 1 to 10, the campaign would rate at least a 9.5 at this point, maybe 9.7.

Why not a 10? I personally wish there was a bit more action and exploration mixed in with the intrigue, wheeling and dealing that goes on. Business deals, corporate espionage and conspiracies rule the day, and while the players and I are loving it, I am hoping for a little more two-fisted space adventure in the near future.

The irony is the only aspect of the game that can get frustrating is the activities of one player, Marcus, and his character Rex Kincaid, who as it turns out is the only truly bold, adventurous type. Unfortunately, he is often the leap-before-you-look type as well, meaning the rest of the group, who are playing a 'thinking game' of Traveller, are unlikely to follow him into the breach.

Andy and Hans (playing Ivan Petrovo and Amaya Takeda respectively) are a bit more action oriented and gung-ho than Will and Ray (Belarus Hosta and Emil Fujikawa), but thankfully have mindsets and motivations that add an air of caution or at least forethought into any grand adventure they may hope to undertake. If all goes well, Andy and Hans can temper Marcus' impatience while simultaneously encouraging Will and Ray to take a few more chances and perhaps even leap into the fray a little (well Ray at least. Will's character would be acting considerably out of character if she leaped into fray of any kind).

All the PCs present in the first session began on Bussard Reach Highport, a space station orbiting Leighton IV in the Leighton system of Flux, Subsector J of the Spica Sector.

The PCs started not knowing each other at all. Most of them go looking for work, either by talking to NPCs or checking help wanted post on the station's internal 'E-Net' kiosks. Major sources of information and work come from NPCs Antoine Lambert, the station's Quartermaster, and bar/restaurant owner 'Barkley' of Barkley's Den (a Vargr who has dyed his fur green and claims to be of a very rare subspecies).

Belarus Hosta (Will's PC), contacts Barkely and Quartermaster Lambert (establishing that she has been on the station long enough to become friendly with them*) and tells them she is hiring for an excursion to a planet in the next subsector (Farbor, Subsector K). She also posts the job positions she needs to the E-Net.

Hosta ends up hiring the other PCs: Dr. Emil Fujikawa (Ray's PC), JayZed Trisector (Ed's PC) and Rex Kincaid (Marcus' PC). Fujikawa has a ship (a variant Lab Ship) and will take them to their destination. In addition, Hosta learns of two vagrants on the station: an alien pilgrim called Berell ThirdTurnFromTheSun (NPC) and his companion, a mysterious man named Kael (Jeff's PC). Hosta leaves the bay doors on Fujikawa's ship open after some parts and cargo are loaded on, giving an unspoken invite for the two to stowaway. Having learned a bit about the alien's culture, she believes she can cover some of the more questionable elements of her trip by saying she and the crew are escorting a religious pilgrim while also studying his religion and culture for a thesis.

According to Hosta, she needs to travel to The Shallows, a planet supporting an experimental aquatic farming operation that she has invested a great deal in. Three months ago, all contact with the colony stopped and now the Imperial Navy has designated it a Red Zone, allowing no civilian traffic to the system. At the same time, they will not tell her the status of the colony and its operation, which she must know for business, legal and insurance purposes. Once she confirms what happened, they can leave.

In addition to the PCs and the alien Berell, Hosta convinces Barkley to come with, saying he could use a vacation and the experience will give him some great stories and maybe information he can use back at his restaurant. Actually, she was hoping his heightened senses and greater knowledge of Charted Space might come in handy. She and Barkley also cook up a contest, "Where's Barkley Gone?", encouraging patrons of his establishment to guess where he went. A contest entry is free with any purchase. The winner gets a 'Barkley's Den T-Shirt, Mug and a free dinner for two (or if it's a family, kid's eat free and adults are half price).

The trip will take approximately a month there and a month back, during which time there would be one fuel stop at the mid-way point each way. On the first fuel stop, the PCs docked at a Hive Federation Highport and refueling station and did a little side business. Barkley told Hosta that since that were there he would try to get a shipment of 'Green Wig', a mildly psychoactive moss/algae that when dried and ground, makes a very relaxing tea. It is something of a delicacy and hard to obtain.

By creating a ruse in which a sample of the tea 'caused' Barkley's fur to 'turn green' (the Hive Federation merchant was aware Barkley was a Vargr but hadn't seen him), Hosta got the group a discount on the fuel and a good deal of a batch of Green Wig, once it was scanned and tested of course.

Now...as to why are they actually going to The Shallows? Well...

*At the start of the campaign I asked everyone, "How long has your character been on the station?"

I prepared a series of index cards with the information they would know or have gained by being on Bussard Reach for their chosen amount of time. Longer wasn't automatically better, just a little different. However, the longer you were on the station the more and better you knew the station personnel (and they knew you).