Let Them Be Awesome

This is a post to my "What Other GMs Do Wrong" series, but it is prefaced with a caveat. A preveat!

Perhaps not a preveat. I don't think that's a real word.

I recently played in a game where one of my friends and fellow players (who is usually the GM in this particular group) made a note of this subject in our post-game discussion. He was not the GM. I was not the GM. Therefore, just the fact that I am posting this in this fashion, as part of this series, may imply that the fellow who did GM did something wrong.

Such is not the case.

The game was pretty darn good (that's Adam talk for excellent), but the subject and 'technique' I am about to describe here could have enhanced it. For some GMs, who have trouble pulling off the big bad, boss fight at the end of a scenario, doing this early in the adventure can make the players feel they've accomplished something, even if the finale goes South for whatever reason. If you are good at presenting the climactic confrontation, what I will discuss here can make it even more satisfying, especially for your less in-your-face combat types.

That said, let's get on with the show...


***
In the past seven years, I have probably participated in this hobby as a player as much as I have in the thirty years prior (maybe more so, or getting close). Moreover, I have largely enjoyed being a player, which is a very different experience to that of the previous three decades.
It hasn't all been great, but it's been better than it was in the ol' days. I love GMing, but I'll be the first to admit that one of the reasons I became so focused on it over playing was a lot of crappy experiences as a player in the late 70s and early 80s.

This particular subject harkens back to those days, but sadly I still see it occur today. Before I really get into it however, I need to put up a little bit of a warning:

The following post contains advice and recommendations for running a RPG of a heroic literature, or cinematic, nature. It is probably not useful if you intend to run a survivalist style RPG where the PCs need be fearful of opening doors, walking, and breathing. If you are concerned about 'realism' and 'gamism', this article may frighten or even horrify you.

The management at Barking Alien takes no responsibility for the effects of this post on members of the OSR. If you have the OSR condition, consult your preferred rulebook, or see an OSR GM before continuing. I'm sure, if you are concerned in any way, you can skip this one entirely. It's OK, really. I'm sure if you switch the channel you will find something more to your liking. Someone, somewhere on the 'net is probably discussing Initiative again or talking about a new way to do Saving Throws. Look, here, Tower of Zenopus is doing a post on Alignment!* Enjoy.

Still some people left? Good. We can continue.

What Other GMs Do Wrong: Allowing the PCs To Be Awesome

So let's talk about letting the Player Characters be awesome. What does that mean? In a nutshell, it means allowing for scenes where the PCs get to look like total badasses...to the players.

This is about letting each PC have its moment in the sun, and in that moment, having the player think it was a cool idea to play that particular character.

The focus here is in making the players feel that the characters they created are useful, with something important to contribute to the party. That these people (the PCs) are competent, potentially heroic individuals.

The PCs do not exist to get trampled by you, the GM, mowed down like helpless blades of grass, and quickly forgotten. They may face challenges they can not beat, but there are ones they can. These lesser obstacles, once vanquished, give them the inspiration, drive and motivation to take on bigger tasks, and harder challenges.

When I say 'be awesome', what I mean is, allow them their moment to be great at the thing they built their character to be great at.

Most Gamemasters can't ^#*@ing let the PCs be Awesome!

This 'being awesome' can take many forms, and most of them are depressingly easy to make work. I say 'depressingly' because if I had a nickel for every time I heard, or saw, a GM not allow for awesomeness, I'd be able to afford that return trip to Gen Con I've been wanting to make.

One of the most basic ways to promote the concept of PC awesomeness is to have something for them to do in an adventure. If the adventure is a pre-fab, 'store bought' jam, it can be difficult to make sure it has something in it for everyone. I highly recommend the first adventure for any campaign of anything be home made. Seriously, I can't advocate this enough. It's fine to use modules, or pre-made adventures, later in the campaign but start everyone off with something you yourself created.

Why? Because you can build it to your specifications and the specific needs, interests, and talents of your players, and their PCs.

Let's check out some practical advice aimed directly at the concept I'm discussing.

Here's the penultimate example of a perceived lack of awesome: The Bard. 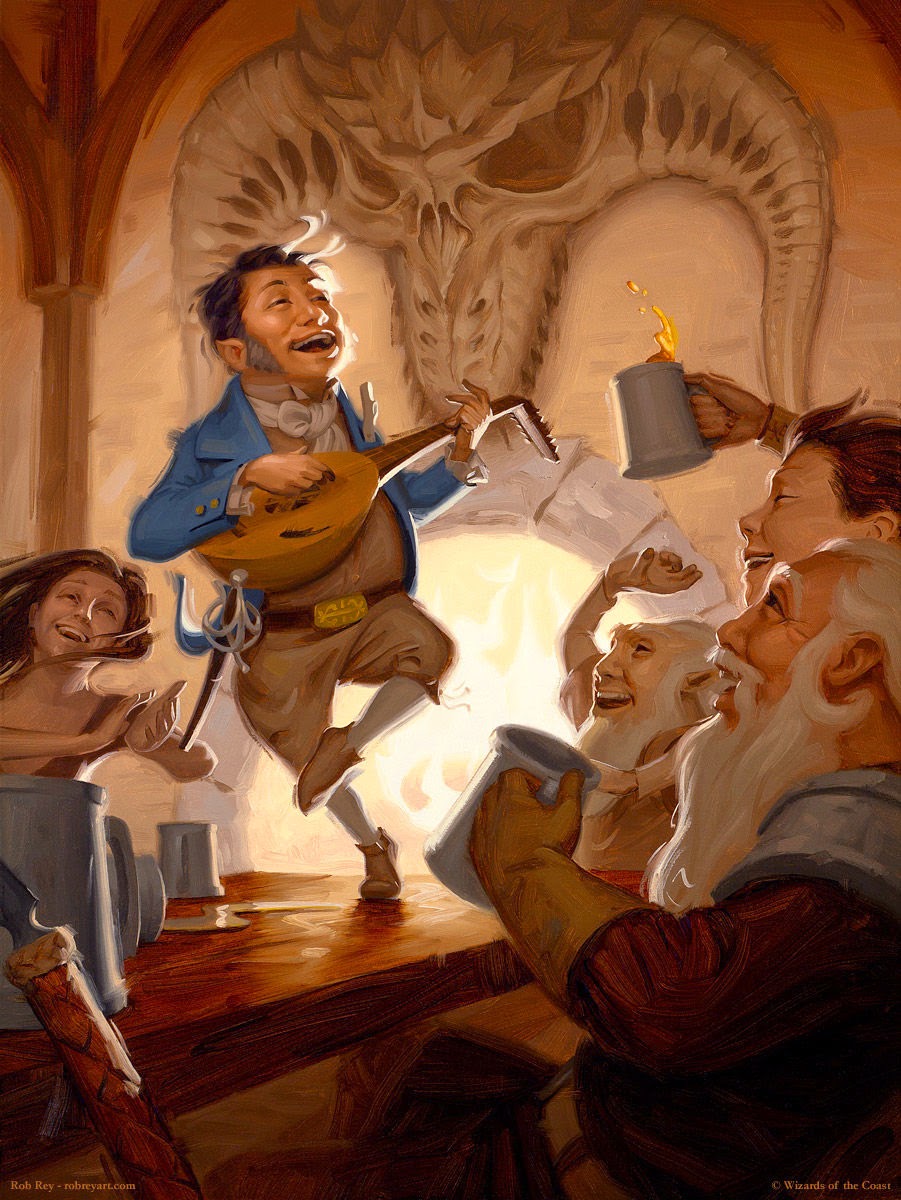 Illustration from the
Dungeons & Dragons 5th Edition
Player's Handbook.
One of the best D&D images I've seen in years.
#1 Not Awesome in Your Head, Awesome in Theirs
The Bard sucks right? I mean, who in his right mind enters a dungeon filled with goblins, traps, and untold menaces armed only with a lyre?
A PC, that's who.
No one chooses to play any type of character because they don't want to be awesome. This means, if someone in your group chooses to be a Bard, they intend to play an awesome Bard. It is also safe to assume they believe the Bard is an awesome class.
So, if for some reason the Bard PC never does anything awesome in an entire adventure, is it because the player sucked, or because there was no way for a Bard to be awesome in your (the GM's) game because you think Bard's suck?
If someone plays a Bard in one of my campaigns, there will be a scenario in which singing, performing, or having knowledge of an old song will make a huge difference.
If someone plays a Demolitions Expert, you can be certain there will be something that needs to be blown up. If someone chooses to be the Communications Officer in a Star Trek game, they will get the chance to do something beneficial that only the Communications Officer is proficient at. If someone plays Batman, there will be a mystery. If no one does, there may not be. Instead there will be a situation perfect for that character, the one who is there, to handle.
#2. Not everything needs to be epic.
This goes back to the comment made by my friend and fellow GM who essentially inspired me to make this post.
Recently we played in an excellent adventure (a one-shot 'two-parter') in which the PCs were military officers, scientists, and special agents fighting against the supernatural during World War II. Imagine Nick Fury and his Howling Commando's, or Sgt. Rock and Easy Company meets B.P.R.D..
During the scenario, the PCs (largely regular soldiers who had experienced some brush with the paranormal) had to track down a stolen Russian artifact of considerable cultural importance to the Russian people. Looking to make nice with our potential new friends, the Allied Forces sent several teams out to try to find and retrieve the object.
In the course of the adventure we (the PCs) ended up fighting some shape-shifting German soldiers, a group of haunted, Teutonic Knight armors, and uber-powerful German Warlock type guy. Pretty crazy, scary stuff.
Do you know what we didn't get to do? Beat up some plain old Nazis.
What's significant about that? Well...these other guys I mentioned were hard to beat. Really hard in some cases. It was fun, but a little frustrating that everyone we faced was way tough, way powerful and it took two or three of us (or more) to face one opponent in order to bring them down.
If there had been one or two scenes of us (the PCs) versus some regular soldiers, we could have fought and defeated them individually. Each of us would have had his turn in the spotlight to seem badass. This would have made us feel like serious, war movie, tough guys. It seems a minor thing, but we really could have used it. Two of the PCs were built to be really capable, tough-as-nails, absolutely normal men. Neither of them could do much against the supernatural opponents without the help of at least one or two other people.
In Superhero games, I usually have a first adventure sequence where the PCs face off against goons, or henchmen working for the supervillain. Their sole purpose is to get trounced by the heroes so the Superheroes can feel super. Seeing the PCs take on normal Humans gives the player an ego boost, and a new perspective on how much power the PCs truly wield.
***
Relative to my other entries, this is a short one. I feel strongly that an awareness of how to represent 'PC Awesomeness' will greatly benefit your games, but a lack of it isn't a deal breaker. It isn't the end of the world, and a good GM can still create a fun and exciting scenario without focusing on it too much. However, if you don't allow for it at all, yes, it will be noticeable and turn the cool meter on your game down a few notches.
It doesn't irk me the way Railroading does. Spitfire and damnation I hate railroading. I hate that ^#*@ with a passion.
Next time on What Other GMs Do Wrong...Railroading. Dammit.
AD
Barking Alien
*Just teasing Blacksteel. Tower of Zenopus is an awesome site. Check it out everybody!
﻿