They Mostly Come At Night...Mostly

My ideas for an Alien(s) game that is.

Kane: "The pit is completely enclosed. And it's full of leathery objects, like eggs or something."
***
I was looking into the indie Horror RPG Dread as a possible system for running an Alien(s) RPG campaign. It has a lot of potential, and virtually no hard and fast rules.
I like the idea of using the Jenga tower to build tension and suspense. At the same time, I need something a little more definitive in the area of character creation to make the game feel, well, both reflective of the Alien(s) setting, and more like a traditional RPG.
Why? Well, the one flaw in the overall design of Dread is that it's really only good for one-shots. A key reason for this is that the game is especially lethal. This is of course reflective of the Horror genre, and it's reinforced by the mechanics. Therefore it is only an issue if you want to tell a longer, or deeper, story.
Another element that makes it less than optimal for an ongoing campaign is the character design approach has little to nothing in the way of a mechanic for PC Experience, and Improvement.
You're not expected to live that long.
While I personally have no problem with the purely narrative nature of how characters are put together in Dread, my players are going to want a bit more to sink their teeth into. Also, since the setting deals with Science Fiction elements, the players are going to expect to see some details that make them feel they are playing competent professionals in a futuristic setting.
It's how (a lot of) players think.
Here are some ideas I have for adding some details to Alien/Dread Player Characters, of both a narrative, and mechanical nature. By modifying the standard process just a bit, it is my feeling that the players will feel their PCs are people capable of doing their job, whatever it is, and will see an in-game result that will allow me to run a mini-series/short campaign, instead of just a one-shot.
If the PCs are differentiated, and grow, the players will be more attached to them. Hopefully enough to try and keep them 'alive' for as long as possible.
Dread PCs are created by having the players answer a series of questions about their characters. The GM creates a questionnaire, and the player fills it out based on his, or her character concept. Questions can technically be anything, though they tend to range from the vital though mundane, such as 'What is your name?', and 'Where are you from?', to those that will give deeper insight into the character, like 'What were you doing at the Rileys' house on the night of the murder?".
Some of the answers, and a bit of additional information discussed between the players, and the GM (or Host as Dread calls them) can establish that your character has a profession, and therefore some 'skills'. Unfortunately, unless I am reading the rules incorrectly, skills you've established your character having seem to have little barring on the mechanical part of the game. Anytime you attempt to perform an action with a questionable outcome, you 'pull' one, or more Jenga tiles from the tower. Skills have no rating, and therefore no effect on the pull.
So here's where my Barking Alien brain kicks in... 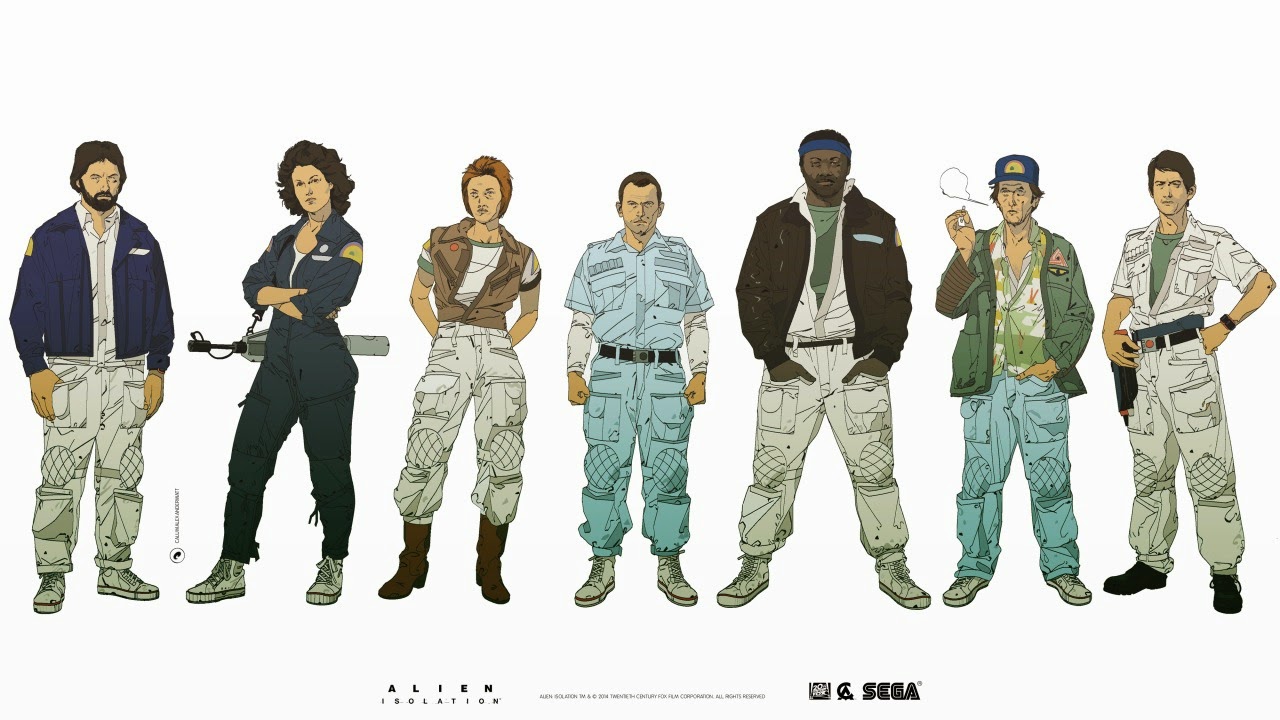 The ill-fated crew of the USCSS Nostromo
Character Art for Alien: Isolation By Calum A. Watt
Dallas: "Well... some of you may have figured out we're not home yet, we're only half way there. Mother's interrupted the course of our journey. She's programmed to do that should certain conditions arise. They have. It seems that she has... intercepted a transmission of unknown origin. She got us up to check it out."
Ripley: "A transmission? Out here?"
Lambert: "What kind of a transmission?"
Dallas: "Acoustical beacon. It, uh... repeats at intervals of 12 seconds."
Kane: "S.O.S.?"
Dallas: "I don't know."
Ripley: "Human?"
Dallas: "Unknown." ﻿
***
First, I'm going to put together a character sheet that looks like a Weyland-Yutani Personnel File, US Colonial Marine Evaluation Report, or something similar. The idea is to immerse the players right away by making their character sheet a prop, or handout in its own right (incidentally this is something I try to do in many of my games).
Instead of asking obvious questions, the player will be asked to fill out a form such as you would to get a job, or join the armed forces. Now, key elements on the sheet beyond Name, Gender, Place and Date of Birth, and the like, will be 'Position', 'Proficiencies', and other job skill related areas. By filling these out, we know what the PCs areas of expertise are.
***
Ripley: I feel like kind of a fifth wheel around here, is there anything I can do?
Apone: I dunno, is there anything you can do?
***
When a character attempts to take an action in the game that falls under the parameters of their Position (Science Officer, Warrant Officer, Infantry Unit Leader, Smart Gun Operator, etc.), or skill set, the Host should take note of it, and allow basic activities, or maneuvers to occur without a pull. For more complex actions, the PCs should get one less pull for situations that fall within their field of knowledge, or prowess.
Alternatively, the PC may 'Gamble' by taking the required number of pulls, but earning a Survival Point*. A Survival Point may be spent at some latter time, to pass on a pull from the tower, especially at a dramatic moment.
For Example:
Ellen Ripley, a former Warrant Officer aboard a commercial spaceship for the Weyland-Yutani Corp., had her flight license revoked following a court hearing regarding her part in the loss of her former posting, the USCSS Nostromo. She became proficient with the operation of Power Loaders, and took a job doing that upon her return to Earth.
[The player lists Ripley's Position as either Warrant Officer, or Civilian Consultant]
[The player lists one of Ripley's proficiencies as Power Loader Operation]
While traveling with a contingent of United States Colonial Marines, Ripley feels useless, and wants to help out aboard their ship, the Sulaco. She decides to show Trooper Commander Sgt. Apone what she can do, and displays her skill with operating a Power Loader.
Impressed, he tells her where to put the cargo, and ordinance the Marines need.
[The Host does not require Ripley's player to pull any Jenga tiles. He judges that these actions are ones that anyone who used Power Loaders professionally would reasonably be able to perform]
At some point later in the story, Ripley is up against a 'Queen' type Xenomorph, and decides to use the Power Loader as a makeshift battle suit to fight it. The creature is formidable, and the Power Loader was not designed for combat. At the same time, Ripley is a capable operator with experience combatting the aliens.
[The GM requires Ripley's player to make a number of pulls during the conflict. The player cites her character's various proficiencies, and experiences, in order to reduce the number of pulls. In a last ditch effort to defeat the Queen, she goes for a move that requires she make at least three pulls. The player decides to pull for all three, getting a Survival Point]
The Jenga Tower falls, and the GM declares the Power Loader is wrecked, and no longer functional. However, the player spends Ripley's Survival Point to hold on to something for dear life while she opens the airlock, ejecting the Queen into space.
***
I have additional material that I can't wait to tell you about. For starters...wait...did you hear something?
Jonesy? Is that you?
AD
Barking Alien
*I want to represent the Survival Points using those clear, glass 'stone' tokens. That, or some sort of chit with either the US Colonial Marine Corps patch, or the Nostromo patch. Haven't decided.
DISCLAIMER: This is a work of fan appreciation, insomnia, and an overzealous love of RPGs based on TV shows, movies, comic books, and other pop culture media. The creator of this material in no way intends to infringe up the copyrights, and badass legalese of 20th Century Fox, Dan O'Bannon, Ridley Scott, H.R. Giger or anyone else with abominable lawyers, and more money than God.

The same thing to the makers of Dread.

I am not making a dime off this. This is just for fun.