The Last Days of Luke Skywalker

The year 2017 has come to an end, and as such, I feel it is my duty as a Star Wars fan with a blog (i.e. no one of any real consequence) to speak my peace on the most polarizing, and quite honestly awkward, of the franchise's films to date...The Last Jedi. 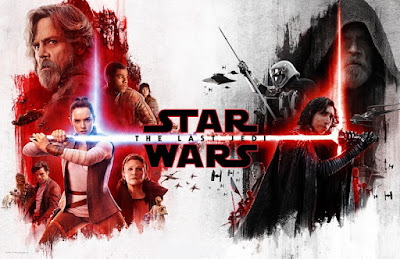 MAY THE SPOILERS BE WITH YOU


I really don't know what to say that won't send me on some kind of rant. That's not what I want. It's not a fan ranting situation that I want to convey here.

I didn't hate it, let's be clear. At the same time, I don't think it's a good movie.

Having seen it twice, I feel like a few of the criteria that make Star Wars what it is were not met. This is separate from my particular feelings on what 'would have been cool', or how I think some of the characters should have acted. Those are my personal opinions, and don't effect whether, or not this was a well done film, or a solid entry into the Star Wars franchise.

The things I am addressing here are things of a cinematic nature, and things that make a good Star Wars, well, good.

A Good Star Wars Movie is Fast Paced, And the Fast Pace Has Meaning

Star Wars isn't Science Fiction. Its not about what ifs. It has nothing to do with the ethical, social, or political applications of science and technology. It's, at best, Space Opera, but really more of a Space Fantasy. At it's heart, it is an Action/Adventure film.

Action/Adventure can definitely have moments of suspense, and tension, and they certainly benefit from scenes with character development and interaction. These must be placed carefully however, less they take energy and momentum away from the action that drives the entirety of the film.

Here, the film largely revolves around the slowest, most tedious chase scene in cinematic history. The good guys move like tiny herd of wounded deer, followed by the world's laziest wolves. It was pathetic, sad, and drained the sense of urgency right out of the sequence, and because of its prominence, many of the sequences that followed.

While there were some fast paced scenes in the film, many were self contained, and did not effect the overall narrative (more on that below). A starship battle right before the slow crawl through space simply highlighted how dreary the subsequent space slog scenes were. The awesome battle in the Supreme Leader's throne room against his personal guard was great, but had no bearing on the larger chase, the decisions of the participants, or anything. Police speeders chasing heroes on escaped animals did nothing to help the Resistance escape (though it may help them indirectly in the future).

Fast Paced Scenes are needed to generate and maintain excitement, and momentum. Those same scenes should have a direct impact on the overall plot.

Character need hardships to overcome, opponents to defeat, and be defeated by, and obstacles of all sorts to challenge them at nearly every turn. These are not merely things that bar their way on a path. By besting these challenges, we get to see what a character is made of. We learn how they act and think. Do they use their heads? Do they give up until reminded of a loved one, or friend in need? Do they throw caution to the wind, and use their physical abilities to barrel through because, hell, no one lives forever right?

In the end though, they succeed. They win, or at the very least they best their challenge and prove that they have what it takes to see the situation through and maybe, just maybe, save the day in the end.

No one accomplishes anything in this film. No one makes a difference, or proves they're special. Even when it seems like perhaps they do, they don't, because something detracts from their success.

Luke does not truly train Rey. Rey does not learn very much. Rey does learn who her parents are but it doesn't matter. Rey doesn't turn Kylo Ren to the side of good. Kylo Ren doesn't turn Rey to the Dark Side. Neither does Snoke. Luke sees Leia before he dies, but not really. He gives her Han's dice from the Falcon, but not really. Finn, smitten with Rey and wanting to help her, never does.

Finn teams with Rose to deactivate the poorly thought out First Order device that can track the Resistance through Hyperspace. They fail. They look to contact the great Codebreaker. They don't. They instead get swindled by Benicio Del Toro (whose character is named Stuttering Benicio Del Toro as far as I can tell - he actually accomplishes something).

Poe proves himself a bad leader (somehow), then a mutineer, then an idiot. Admiral Holdo (who, am I to understand commands her vessel and fleet in a fashionable evening dress? No uniform? Because...?), is a great leader...or a coward. I couldn't tell. I also couldn't tell what the movie wanted me to think of her. Was her move a brilliant one? No. The defenseless transports were largely shot down going to the only planet in the area they could be going to. Many moviegoers complained that she should have told her team what her plan was so there wouldn't have been a mutiny. I disagree. The mutiny was Poe's fault for being an impatient jerk. She could have said, "Don't worry, I have a plan", but wasn't obligated to do so. No, my problem was that it was a terrible, terrible plan that ended up reducing the entire Resistance to no more people than could fit on the Millennium Falcon.

OK, let's look at those instances...

Kylo did indeed kill Snoke, who seemed rather powerful, so yes I will happily admit he accomplished something. Unfortunately, it ended a character that had yet to be developed, which is a problem this new trilogy has across the board. There are too many characters that come from nowhere, and go nowhere. For example...

Finn defeating Phasma was incredibly anti-climactic. Because she is a very 'Boba Fett'-like character (cool looking but doing little to show that she is bad ass), his defeat of her isn't very satisfying. They have but one battle, and in it she is done in as much by the exploding ship she's on as by Finn's combat abilities.

Finally, Rose saves Finn before he flies directly into the Beam Drill thing...and potentially destroys it and saves the day. Rose may have stopped Finn from being killed, but she also stops him from being a hero. His character serves so weak a purpose in the second film, and not much of one in the first film. Going from renegade Stormtrooper, to Guy who takes down the First Order's weapon and enables the Resistance to escape would've been a great character arc. Don't misunderstand, I like Finn. Heck, he's my favorite character in the new trilogy! The problem is that I am starting to realize he's my favorite not because of anything he's done in any of the movies, but because I like the actor, John Boyega. Finn the character is, like most of the characters in The Last Jedi, largely ineffectual.


Characters Develop A  Lot More When They Interact, Less When They Are Alone

In the first film, Poe Dameron never meets Rey. Rey and Poe don't have a scene together in The Force Awakens. In this film, they have one tiny scene together at the very end. Rey never meets Rose. Rose never meets Leia, Luke, Chewie, or Han. Finn, Rose, and Poe have a handful of very short scenes together. Finn and Rose have more scenes together than pretty much any two other main characters (maybe even Luke and Rey!), and yet very little of it is spent getting to know each other. A little maybe. Finn knows about Rose, but what does she know about him? Then at the end of the film, she loves him. What?!? When did they happen? Screw that, when did it start, build, develop, and...what the hell happened to that entire subplot?

These people are all fighting for a united idea. That I get, I like, and it makes sense. They are not, and could not, be fighting for each other, or battling the enemy on a personal level with a scant few exceptions. Rose lost her sister. Finn lost (in a fashion) Rey. That doesn't feel like enough. I saw no sign that these characters were truly connected to each other.

Poe's goofy taunt of Hux for example is funny, but doesn't really make sense. It doesn't motivate Hux to hate Poe personally, nor does Poe view Hux as his nemesis. Why didn't we see Poe in his X-Wing go up against Kylo Ren in his Tie Silencer? What a waste of both characters, and both vessels.

In conclusion, I felt the movie was a lot like...soup. Not good, homemade soup, but mediocre restaurant soup. There were a few tasty chunks of meat, a couple nice vegetables, but it was all held together by a thin broth. It was served so hot you had to eat it slowly, but the next thing you knew it had turned cold, and wasn't even appetizing.

I hope the next film is better. I hope the characters start to work together, and start to matter to the story. I hope we get to see a war in the stars in the final Star Wars movie of this trilogy.