This is a rant brought on by recent feelings of gaming melancholy and ennui.

You have been warned.

Few things in our hobby frustrate and irk me more than the Old School mentality of Gamemaster vs. Player.

In this school of thought, the Gamemaster's purpose is to dispose of, or at the very least make miserable, the lives of the Player Characters involved in his or her campaign.

Likewise, the Player's purpose in such a game is to 'beat the game', defeating the murderous enemy GM by thwarting his or her minions, be they monsters or kindly old beggars, if not the very plans the Gamemaster has for the campaign.

Would they be wrong to kill the poor, destitute sot down on his luck? After all, he could secretly be a diabolical assassin who will be their undoing. In their defense, that's what happened the last three times.

This all makes me want to vomit. 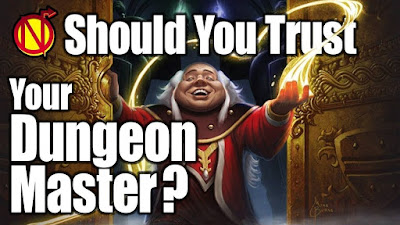 Yes. Or get a new one you do trust.

In two recent, unrelated games I was in I saw a single player exhibit both sides of this disgusting dynamic and it seriously took the wind out of my sails. Not just because it brought down an otherwise good time I was having in both cases but because I game with this guy pretty regularly and now I know I am dealing with someone who thinks this way.

I am neither amused nor enthused for future sessions.

In one instance, the GM had revealed a villain with a secret power that made things a lot more complicated and challenging. The player in question, whose PC was not under attack at that moment, whispered to me, "Any GM worth their salt would take advantage of that power to screw the players."

It isn't that I disagree that the power could have some serious consequences if used in a logical way by an enterprising opponent. It's the attitude and mindset of the statement itself that makes my skin crawl. It's that a GM isn't a good GM if he doesn't use a sneaky power that is difficult to stop in a way that most harms the PCs.

Why not say, "Wow, that's going to be one difficult ability to counter. We'd better think of a plan!"

The second instance is related but in a sideways rather than linear fashion. In a separate session of a different game, the GM (a different fellow from the first) gave the players a choice...

Take damage but accomplish your goal or avoid injury but fail at what you are currently doing.

For example, say you are trying to catch a falling McGuffin but if you do so an enemy will blast you. You can opt to dodge the blast, but you need to move away from the item and thus it will fall past you and you will lose it.

I will point out that this is narrative rather than mechanical. In fact, the entire campaign, which we've been playing for over three years now, has been played this way. The narrative is more powerful than the rules. No one dies, though they can suffer injury, lose a beloved item, suffer personal consequences, etc.

The same player as before, the one who thinks GMs should be tough on PCs, chooses the option of being hit. When the GM colorfully describes the injury, an injury that sounds kinda serious but isn't enough to stop the PC from doing what they are doing, the player went into an uproar saying that their PC would have to stop what they were doing to get medical attention.

Again - at a dramatic moment, in a narrative focused game, the PC would have to stop the action to address an injury the GM made clear would not impede their current activity or goal.

The reason for this, we would learn from the player, was that the description of the injury was, to them, something a Human Being could not or would not continue on with in the given situation.

No grinning and bearing it, biting down on misfortune while fighting on? Why would this be when it took place in a game well known to lack serious or fatal results to our PCs. Even though we have seen the very same injury in action movie after action movie, comic book after comic book, here it doesn't work? People in heroic fiction have lost eyes and limbs and kept going. No, for some reason in this one instance, absolute adherence to gritty realism was the order of the day.

Would you be concerned about blood loss in Teenagers from Outer Space and Toon? 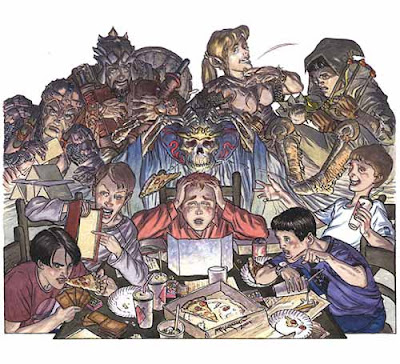 Why? What would make one think like that? Simple - That's what someone who thought as they did in the first instance would do to you if they were GMing.

Basically, if you are a GM who assumes most Players tend to cheat it's because as a player YOU tend to cheat. If you are a Player who throws a fit when you are hit by a surprise NPC attack or sudden terrain condition it's probably because you are a Killer GM who tries to do in your players' characters using similar tactics.

The funny thing is, the player in question is not that guy. Well...he hasn't been that guy for a while. When we first met and for some time after he would heavily railroad as a GM, rule and reality nitpick, and limit Player Agency in favor of his own narrative.

He got better though. Much, much better! Then this...

It is discouraging and only adding to my recent dissatisfaction with my gaming.

While I am in a great game, and running two great games, I still feel like I am not hitting the peak performance level of my potential. I don't know why exactly and I am certain a good portion of it is me, moments like these here remind me how fortunate I was to play with my old group where this sort of thinking was foreign, even anathema to us.

I am gripped by the saddening realization that my old groups were more than good, there were exceptions to the rules. Most RPG gamers of my age group and experience don't think the way I do. The grognards are real and they do not fade easily no matter how much they've worn out they're welcome at my table.

Posted by Adam Dickstein at 3:47 PM