As noted in my previous post, I've recently been reminiscing about one of my earliest Star Wars D6 campaigns, The Smiling Bantha Gang, and I wanted to share my fond memories of it with all of you.

You've met the team: Rodian Smuggler and cryophobe Griggle, aka Grig, Chevin Mercenary and hydrophobe Ja'bral Tar - The Jungle Ja'bun'kel, Mees, a name the Jawa Mechanic calls himself, Shuuth, the Ubese Bounty Hunter who just doesn't fit in, and Ximet 'Force' Phours, the Starfighter Pilot who is definitely NOT a Jedi...unless he is.

After numerous capers that became legend in the Outer Rim Territories, the gang of spacer youths was forced to disband and flee for their lives when their leader, Jo Jetto, his trusty sidekick DC-77, and their mobile home-base The Smiling Bantha, were captured by the Imperial Navy of the Galactic Empire.

Ten years haved past [between the prologue and the start of the campaign] and each member has moved on to other things, none as exciting or lucrative as their old Smiling Bantha escapades. That's when they are individually contacted and given a request they can't refuse...travel to their old hideout on Tatooine to hear the last will and testament of their old boss, Ortolan gangster Jo Jetto.

Speaking of ol' Jo, did I forget to mention he's alive? For now.


Synopsis: The campaign begins with an 'Opening Crawl' that gives the gang's backstory and mentions Jetto is alive and, the group having received his dying request; meet back at their old hideout on the outskirts of Mos Eisley Spaceport on Tatooine.

When the team has assembled at the hideout some days later, they are lead in by their old friend DC-77, an Accounting and Logistics Protocol Droid who has definitely seen better days. Accompanied by their own droids, Protocol Droid JD-3PO and Astromech R2-D0D, the guys gather around Jo Jetto who is quite literally on his death bed, assisted by Medical Droid 30-1B.

Jetto proceeds to gush about how much he missed 'his boys' and how nice it is to see the 'family' together one last time. Each member reacts differently. Grig and Ximet 'raise an eyebrow' and look at each other in way that implies they suspect Jetto's up to something. Ja'bral nods and tears a little, having missed Jetto and the group. Shuuth vibrates with anger and barely holds himself back. Mees seems confused.

Eventually Shuuth, who can't contain his emotions any longer - feeling betrayed by his former mentor and father figure - shouts at Jetto in Ubese. Protocol Droid JD translates (which ends up hilarious as JD speaks Basic/English with a Southern American accent and a stutter. His voice and mannerisms were based on famous Country Western Singer Mel Tillis). Shuuth asks how Jetto is alive, let alone free, where he's been, and how come he never tried contacting the gang before now?

Jo Jetto replies that he was held captive at a Penal Colony by the Empire for 7 years before he was able to escape during a prison riot/breakout. He had to go into hiding, barely able to survive because of injuries and illness he developed at the Penal Colony. When he realized his time was growing short, he located and purchased back DC-77 who had been sold off at Imperial Auction after they had wiped his memory. Luckily, Jetto still had a few friends and tricks up his sleeve. He managed to install a partial back-up and access a part of DC-77's memory bank that had a hidden data chip.

Using all the resources he had left, he made his way to Tatooine, moved back into his old hideout which had been left abandoned and set out trying to find the team. Now that they were all together he could give them one final gift as a thank you for all the good times they had together.

The cargo aboard the Smiling Bantha, a collection of rare artifacts stolen from an Imperial Archaeological Site was never confiscated by the Empire. The news came as a complete shock to the group. No indeed, DC-77 had jettisoned the cargo prior to the Imperials capturing Jetto. It was picked up by an associate of Jetto's, Dunda Keel, who hid it on the remote planet of Dandosha. Sadly, Jetto was recently informed the Keel was found dead and another party may be after the treasure as well.

The series of adventures that followed dealt with the team trying to find the planet Dandosha and fighting off a variety of rival groups attempting to get to the treasure first. Included among the opposition was a contingent from the Galactic Empire lead by an Inquisitor named Skoul (pronouced 'Scowl)', the Mandalorian Bounty Hunter Fleeto Woff, and Space Gangster/Crime Boss Gildergath The Great!

Highlights: Several of the early sessions featured The Smiling Banthas discovering that some of their old gear, droids, and vehicles are currently in the possession of other parties and the team went to get back what was theirs. Especially notable was an initially stealthy turned raucous raid on Jabba the Hutt's palace to retrieve Ximet's Uncle's X-Wing, at the time being piloted by one of Jabba's close associates. (When we meet Ximet in the 'present' he is flying a patched together Z-95 Headhunter).


Another great moment I remember was when the team's current ship, Grig's Cool Breeze, was damaged and they had to make an emergency landing as soon as possible. They limped to the nearby Hoth system where they discovered evidence that a huge battle had recently taken place on the thought to be uninhabited planet. What a score! They managed to salvage guns from an AT-AT's head for the Cool Breeze, spare droid parts, fuel, and even a semi-intact Incom T-47 Airspeeder, armed and modified for operation in the cold, ice, and snow of Hoth.

Of course, Grig freaked out, initially refusing to even land on the frigid world and later refusing to open the cargo bay doors to bring all the goodies into the ship. After the team argued with him, coaxed him, and made all kinds of promises and compromises, he eventually conceded to open the doors...but first...Grig's Player describes how Grig puts on long, thermal undergarments, then puts on his flight suit, then a loose shirt and pants over that, then wraps up his feet, puts them in socks, then puts on boots, then puts on a Han Solo Hoth Outfit style jacket with a fur rimmed hood...LOL It was hysterical.

Another awesome moment came when part of the team had been captured and brought on Inquisitor Skoul's Victory Class Star Destroyer. The rest of the group shows up, attacks and boards the Star Destroyer, and eventually sets the vessel's power plant to explode using a combination of computer splicing and demolitions. As the gang attempts to escape, the timing is a bit off and explosions begin before everyone is ready to leave. Ja'bral Tar, the teams biggest and slowest team member, is never going to get to the Hangar Deck in time. Instead, he battles through a bunch of Stormtroopers and jumps...OK falls on purpose...into an Escape Pod. He ejects, zooming through space until he crash lands in the middle of the bright red ocean of a planet.

Deathly afraid of being in water and drowning, Ja'bral nonetheless holds it together, maintaining his reputation as the group's resident badass. That is...until he noticed a hair-thin fracture in the clear window-plate. A tiny drop of red liquid, smaller than that from a eye-dropper, plinked into the interior of the escape pod. Ja'bral absolutely freaked out. He started screaming about how he was going to die, all the things he never got to do, etc. Grig was like, 'I feel your pain my friend. I know that fear!'. Meanwhile Ximet and Shuuth were both saying, 'you've faced down squads of Stormtroopers by yourself. You charged an AT-ST and an armed Landspeeder! You can not be scared of a drop of water.' Well...he was. REALLY, really scared.

I remember the pod bobbed and flipped in the water because of Tar's panic. Eventually it tumbled airlock side up and Tar tried to get out of the vehicle, just in time to be attacked by a bizarre, gigantic, red ocean eel monster. As Ja'bral fought off the beast, the rest of the gang swooped over with the Cool Breeze to save him! It was awesome.

Eventually, the team met with Skoul and The Great Gildergath in a final battle on the wind swept world of Dandosha. Mandalorian Bounty Hunter Fleeto Woff was also there, but in a twist brought on by an earlier encounter with the Smiling Banthas, Woff fought with the gang, not against them. Ximet manifested true Force abilities for the first time (more or less - he couldn't fully control them), giving the team a solid advantage until Skoul realized what was happening and the two began an epic duel. 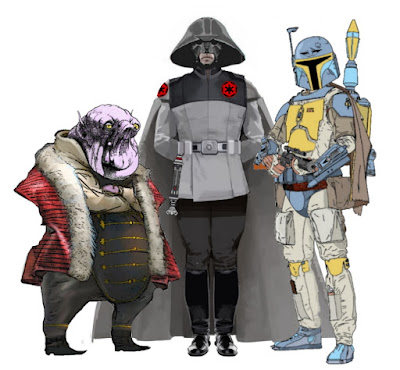 
In the end, the Smiling Bantha Gang defeated Gildergath and his henchmen, The Great One running from the battle badly wounded. Skoul was apparently killed when part of an ancient Jedi Temple collapsed on top of him. Mees lost his Probe Droid and R2-D0D was badly damaged, but Mees himself was unarmed. Shuuth was also seriously injured, as was Ja'bral Tar but not as badly. Fleeto Woff was hurt but ignored it in order to help the anti-heroes finish their mission.

The treasure turned out to be ancient Jedi artifacts, including something akin to a holocron that revealed a legend/prophecy which said a group would emerge when the time was right who, though they may not have been heroes in the past, would take the artifacts and become heroes for the future.

The final scenes of the final session see the gang heading off together to find the Rebel Alliance, join them, and give the artifacts to someone named...Skywalker...

The Force Will Continue to Be With You One More Time...