Twelve days ago I posted an idea for using the setting of Red Dwarf, the British, Sci-Fi Sitcom in conjunction with the rule mechanics from the Free League Publishing ALIEN RPG, based on the seminal Sci-Fi Horror film that spawned (get it?) a franchise of its own.

A lot has happened since.

My good friend and fellow fan of both IPs Tim Knight, of the illustrious Heropress Blog, really liked the idea and it inspired him to follow up on several ideas of his own in the same vein. You can read his posts here and here.

I additionally received quite a number of Likes when I posted the idea to Twitter and my enthusiasm for the concept grew exponentially from there. Before I quite realized what was happening I had a group, a date and time, and was beginning my newest campaign endeavor... 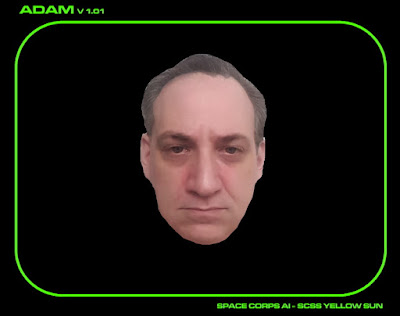 "Hello, I am ADAM, the Artificial Intelligence aboard the Space Corps Search and Research starship 'Yellow Sun'. I have an IQ of 6000. That's the equivalent of 6000 fans of Brexit or 12,000 Trump Supporters."

[Once the campaign concept was proposed and character concepts were discussed, the players began sharing little snippets of prologue material needed to set the stage for the first session. I haven't seen this done this way in a very long time and it incredibly inspiring. What you see below is a combination of those pieces with some editing by me, the GM, to make it all flow together as a single narrative.] 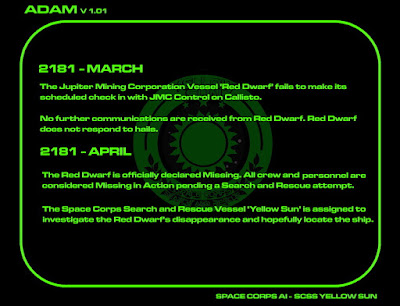 At the end of March of 2181, the Jupiter Mining Corporation vessel ‘Red Dwarf’ failed to check in with JMC Command and after thirty days was declared missing.

JMC contacted the Space Corps, as was protocol, and by late April a Search and Rescue ship, the ‘Yellow Sun’, was dispatched to try and locate the mining vessel and/or any of her crew.

This is what happened… 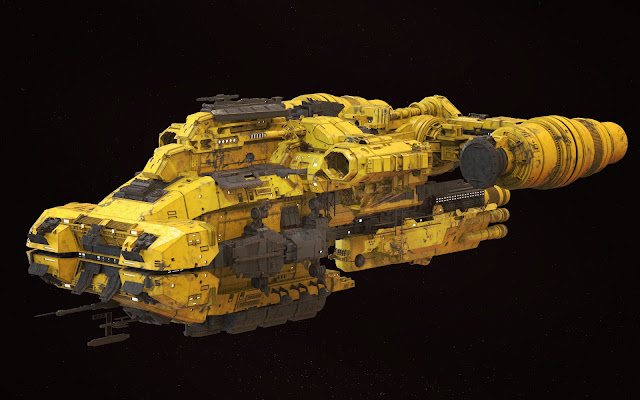 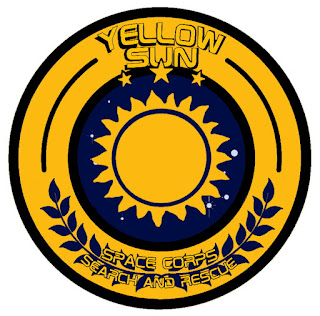 In order to keep morale on the mission high and the crews’ minds off the potentially tragic fate of those they are searching for, the Space Corps hires a comedian to come on board to entertain the troops. The comedian, one Mitchell Webb, thinks he is working a cruise. He knows nothing about the Space Corps starship ‘Yellow Sun’ or the disappearance of Red Dwarf, or indeed anything about mining, rescues, or space flight. His only life skill in fact, is using wry observation to amuse his fellow human beings.

Meanwhile, as Yellow Sun departs on its mission, a live chicken, intended for the captain's dinner table, escapes into the bowels of the ship. Despite an intense search by the captain's mess staff, the chicken is not found. A.R.T.H.U.R. 1001, the ship's Robot Security Chief, attempts to assist but is unable to fit down the ventilation shaft the chicken was last seen entering. He instructs one of the ship Skutter Maintenance Droids to pursue and apprehend the chicken.

Around the same time, Lt. Donald Wilder, the Yellow Sun’s Rescue Operations Specialist, was prepping for an Emergency Radiation Leak Drill. Unfortunately, Wilder was unable to go through the proper channels due to a previous drill that went a bit sideways.

Wilder had recently set up a car accident scenario featuring a 10 car pile-up in a hangar bay only to have it shut down by the Captain after a Droid shortage was reported because so many of them were building cars for the session. Another dozen Droids were reprogrammed to serve as stand-ins for injured passengers. Over 14 hours of work wiped out by a short sighted (though understandably irate] captain.

It may have been this act, or perhaps the many similar ones just like it, that spurred on Lt. Wilder’s team, Rescue Team Gamma, to perform a rather extreme practical joke. Convincing their department leader that they were staging a surprise ‘Airlock Malfunction’ scenario, Wilder’s team threw him in an airlock and tried to convince him he only had a minute to escape before the outer airlock opened.  While he took the situation he was in seriously, a part of him could not help but wonder if he had forgotten something important.


Something like an Emergency Radiation Leak Drill complete with real danger from a purposely damaged drive plate.

With little to no time to spare, ARTHUR is instructed to find Mitchell Webb and get him safely into a Statsis Booth until the current situation, a Cadmium II Radiation Leak, can be contained. Although ARTHUR is able to fulfill his mission, no thanks to a complaining Webb, it is too late for everyone else.

Webb ends up in Statsis, Lt. Wilder ends up accidentally ejected out of the airlock, and the chicken manages to elude the Skutter in a radiation shield section of the cargo hold. ARTHUR returns to his security duties.