Can we just talk about Spaceships for a moment? 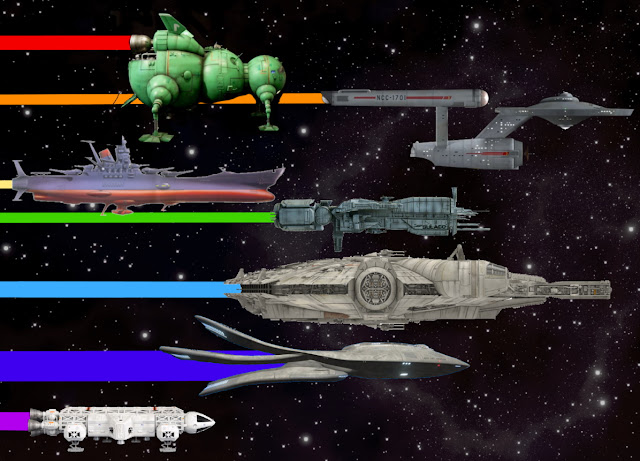 I think one of the primary reasons Science Fiction/Space Adventure is my favorite genre, a major factor in why I like it SOOO much, is that you start with a Spaceship.

A Spaceship represents so many things; it's the party's base of operations, their home, their refuge from danger, as well as their greatest weapon and defense against the forces of their enemies. At the same time, the Spaceship can be a setting that contains danger or is a danger to the group all on it's own. 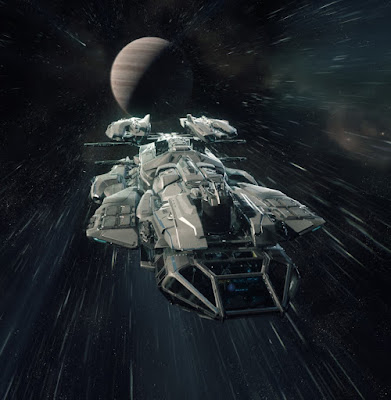 I've often scoffed at the concept of the Megadungeon, a massive beyond reason maze filled with monsters, traps, and treasures that seems like nearly a city or nation onto itself. For what purpose? Who would build such a thing and why?

Now picture a spaceship like the Red Dwarf from the British Sci-Fi Sitcom of the same name. Six miles in length, a thousand decks high, with anything and everything you could want in Sci-Fi city and more. It has a Bridge (The Drive Room), Med-Bay, Science Labs, Crew Quarters, a Hangar Bay (a room in a Spaceship for holding - Squee! - littler Spaceships!), as well as a Virtual Reality Center, a Movie Theater, a Bar, and a host of other rooms, many of which the occupants might not even be familiar with (such as the secret prison deck 'Floor 13' in Season VIII).

Like a Megadungeon, exploring this vessel could be the fuel for many sessions of adventure, but that isn't that best part. No me'laddo, the best part is it belongs to the PCs for all intents and purposes and serves as their conveyance to excursions anywhere and everywhere else they want to.

The PCs in such a ship can travel to other planets, through time, and even to - pinch me I must be dreaming - other Spaceships! What's the best way to reach that 2 mile long, highly advanced, derelict battlecruiser full of upgrades and goodies? Why, in our 6 mile long, clunky, mining freighter barely held together by duct tape and elbow grease of course!

Also, and I know I've talked about this before, Spaceships in Sci-Fi games that feature them usually have personalities. They are, in a very real way, the most important NPCs in your game. Think of the ship's design, attributes, and purpose and how that interacts with the crew's attitude towards the ship.

The Millennium Falcon is Han Solo's baby, his Girl Friday, and also his greatest pain in the keister. It's how he gets around, where he lives, and how he makes a living (take about work from home!). You never see Han's living quarters in the films but you see bunks built into the wall in the Crew Lounge area. You see a holographic chess table. As Spaceballs so aptly observed, the Corellian TY-1300 Light Freighter is one part Big Rig truck and one part RV Mobile Home.

Sure the Hyperdrive is unpredictable and there might be pieces of you in three different systems if you can't find a way to bypass the compressor, but she's got it where it counts plus a whole lot of personal modifications. A PC or group that owns a Star Wars freighter makes it their own, even if they have to occasionally put up with a finicky lateral stabilizer or that weird smell from the vac tube. 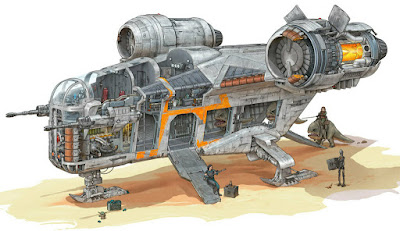 One of my current favorite spaceships:
The Razor Crest from Star Wars: The Mandalorian
Art by Max Degtyarev

Compare and contrast this with the sleek, efficient, and rather formidable Constitution Class USS Enterprise or the Planetary Union Fleet's ECV-197, USS Orville. You don't worry that these ship will work - you know they will do their job and do it well - but so do your enemies. Every hostile commander will want to say they were the ones who finally defeated the mighty flagship of the fleet or captured your craft to learn the secrets of your superior Quantum Drive.

Ships like these are a pleasure to serve on however, offering Holodeck recreation, schools for the young ones, and a drink after your shift with your friends in Ten Forward or the Mess Hall. Sure it's a job and your place of work, but after a half dozen sessions it starts to be a very comfortable place. After a year of adventures, it feels like home. Granted it's a home with Plasma Blasters and Deflector shields so it protects you like no home can, but you'll also want to protect it.

From the 6 mile long Red Dwarf, to the 288 meter Enterprise, to the mere 34+ meter Millennium Falcon, all are ships you can bed down in for the night and wake up refreshed the next day cycle, ready to kick alien or robot butt. What happens if your ship is somewhat smaller? Maybe...much smaller.

Life among the stars in a shuttle or starfighter is going to be very uncomfortable and lonely. There is different take on the feeling of isolation here than there is aboard a ship like, say, the Nostromo from Alien (the 1979 film).

Walking the corridors or massive machine bays of the Weyland-Yutani Commercial Transport gives a feeling a creepiness and loneliness even if you aren't the last person alive. However, prior to infestation by a murderous extraterrestrial parasite, you still have your crew around and though you may have toughed down on a god forsaken dust ball in the middle of galactic nowhere, at least you have your chums. For now.

In Seasons VI and VII of Red Dwarf the gang spent the entire time trying to find the titular mining vessel in a Starurg, a 'Class 2 Transport'. Having re-watched the series recently it gave me some ideas on the use of smaller ships in RPGs. In a fighter or similar small craft there may only be room for two to four people or even a single occupant. Not a bad option for a GM with a very small group of players. 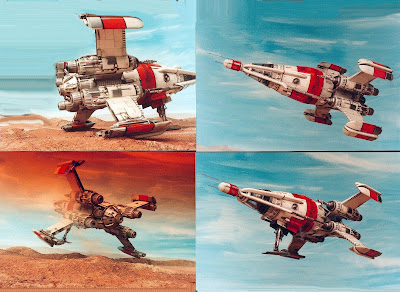 I have seen a number of Star Wars games in which the lone X-Wing Pilot and their trusty Astromech Droid get separated from the rest of the group and have to survive for a while on their own until they can either locate their buddies or be located by them. Imagine having nothing but space, the lone cowboy/girl/person and their trusty steed a million miles (light years) from anywhere with not enough of any necessity to make it out alive but fighting the odds to do so anyway.

What about a Starfighter Squadron campaign? Each player's PC has their own fighter and they travel from place to having adventures, fighting the good fight, and swooping in to save the day!

You can certainly run a Fantasy campaign where the PCs are the crew of a Pirate ship or a Post-Apocalyptic game where your group controls a train or a fleet of vehicles, but honestly how often is that done? How effectively? On the other hand, if you're playing a star spanning Space Adventure RPG the idea is baked right in. See, there it is, in all those tasty nooks and crannies.

Anyway, that's all for now. Got to write up Episode 3 of my Yellow Sun campaign and prepare to run Episode 4 in...Yikes! Tonight!


PS: Sure, you can run a game like Traveller or even Star Wars or something where you don't begin with a Spaceship...you can also get chocolate chip cookies with no chocolate chips and taco with no tortilla...but why would you do that. What's wrong with you? You monster!

Posted by Adam Dickstein at 4:56 PM