Hmmm. This is a tough one. I've had some really good purchases over the years.

Some of my Japanese TRPGs were purchased at conventions. I was able to buy a number of items I had missed to complete my collections of FASA Star Trek and West End Games Star Wars at GenCon and a few more local conventions.

I was able to get my LUG Star Trek TNG - RPG signed (By Patrick Stewart!), as well as my Mutants & Masterminds First Edition (by Steve Kenson).

I bought my copy of Dungeons & Dragons 3rd Edition at GenCon with my ex-wife. Our first vacation together (we were living together, but not yet married at the time).

Hmmm. So tough. So many good products. So many memories. 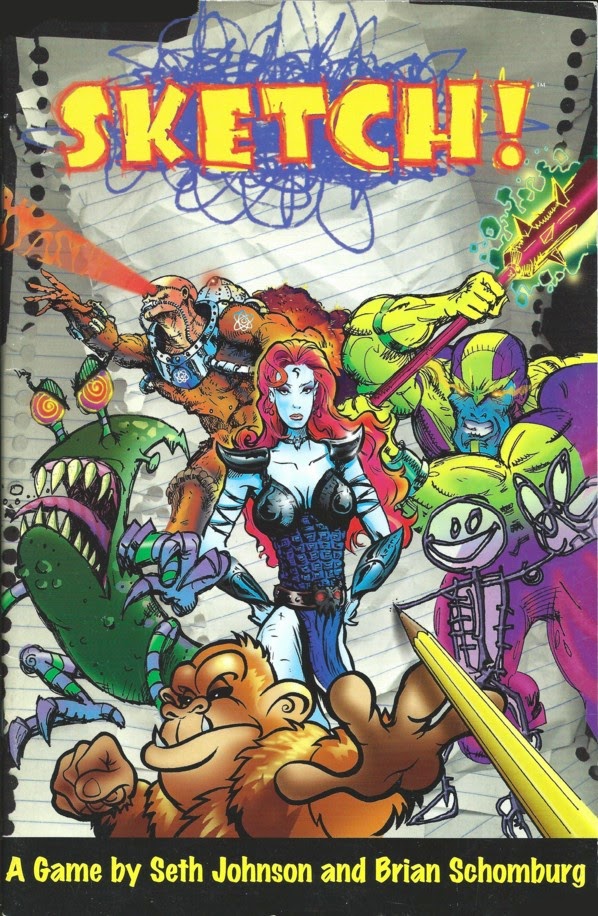 Oh my lord, have mercy, how I love this game!

Sketch! is a work of sheer and infinite genius created by two guys named Seth Johnson and Brian Schomburg. I met one of them. I forget which (Sorry guys, it's been a while). I picked it up at GenCon 2000, which I attended with my then wife.

I walked by the table of Corsair Publishing, and noticed a bunch of drawings on the booth 'wall'. The drawings were mostly done in crayon or magic markers and reminded me of when you were a kid and went to those restaurants where you could draw on the paper placemats.

One of the two creators asked me, "Hey, do you want to play a game?" I asked what kind, and he said it was an RPG where you create your character by drawing it. As my eyes popped out, my wife-at-the-time laughed and said she was going to go check something else out and would be back later. We always got each other that way.

I sat down at a table inside the booth, as the creator and soon to be GM rustled up one more player. As it turned out, he, the game's designer, was in for a surprise. He had pulled in two ringers.

One of the first things he said was, "You don't have to be an artist or anything to play Sketch! You just need a cool idea and a way to show that idea on paper." He himself has a simple, heroic female body shape on his character sheet, colored in patriotic stars and stripes of red, white and blue, with a black & white, newspaper photo of an old lady's face. The photo was taped or glued in place. The only non-visual clue to this character's origin and powers was her name...General Grandma!* 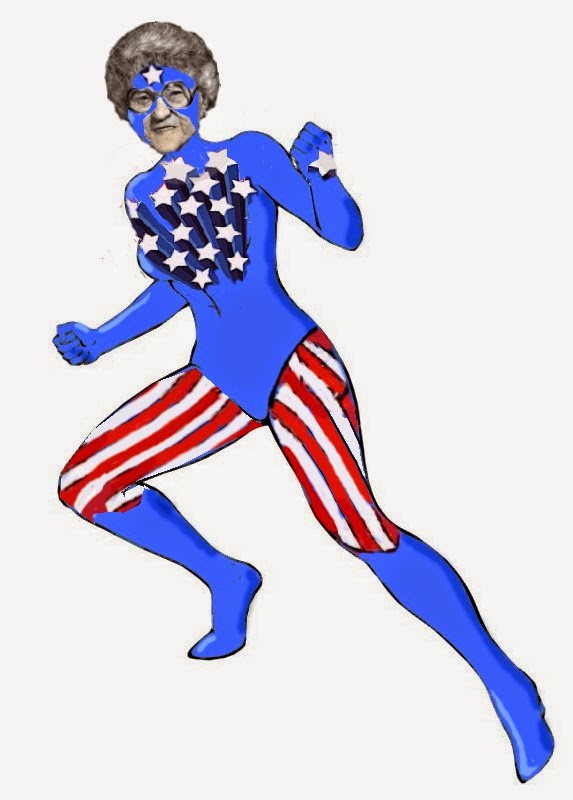 The idea of the game is that you draw your character, and than hand it over to the person next to you, who then passes it to the next person, etc., until it comes back to you. Each person, upon receiving the character sheet, rates the character's abilities on a scale of 1 to 10. The attributes are pretty basic, consisting of Speed, Muscle, Power, Gear, Mind and Toughness.

Other than the illustration, all the others players have to go on is your character's name. This is the only non-visual clue you can give about your character to try and influence their decision on how awesome your character is.

Using only D6s, the game is extremely rules-lite. It's basically stat + 2D6 vs. either a difficulty number or an opponents roll of the same. Highest roll wins.

After rating the characters, it was an all or nothing, knock down, drag out brawl, to see who would claim the title of 'Sketch World's Mightest Warrior', a kind of pro-wrestling, TV show for out of work, or struggling, heroes, villains and powered creatures from across the universe.

I played Do-Inuraijin, a vaguely dog-like robot that sort of resembled a Pokemon or Digimon character. He was a dark blue and light blue mechanoid with glowing yellow markings and eyes. I illustrated him surrounded by electricity. He had sharp teeth, claws, and an armored body.

The other player the GM managed to bring in was, it turned out, a toy designer and illustrator for Kenner, who had worked on the designs for numerous Star Wars figures and other toys. His illustration was amazing, blowing both mine and General Grandma out of the water. Named CyQuilBoar, the character was a humanoid boar with porcupine quills and cybernetics. Of course it was.

CyQuilBoar and Do-Inuraijin both attacked General Grandma early on in the match, and it wasn't long before the arthritic avatar of America was beaten. Next, the remaining contenders faced off, with CyQuilBoar landing a few solid blows against the bolt blasting bow-wow, Do-Inuraijin.

Finally, CyQuilBoar grabbed Do-Inuraijin in a bear hug, from which I proceeded to shock the daylights out of him, pointing out my character constantly encircled by lightning. See, you only have the powers you appear to have in the picture, uuunless you manage to convince the rest of the group otherwise.

CyQuilBoar was finished off by an additional electrical discharge and Do-Inuraijin was the winner! Woot!

I have since run this game numerous times, most notably for my friends in New Jersey, and the students in Sunday tutoring class. I have never gotten to use it for an ongoing campaign, but I would love to try. The book has some really solid ideas for long term play, describing a humorous version of the world seen in Alan Moore's TOP TEN comic book series.

Elements of this game inspired ideas that went into my Muppets RPG.

Great game, great read, a lot of fun, very happy to have purchased it.**

Hmmm. I should run it again soon...

*During the game everyone was talking trash to each other. Amid the banter, we gleaned some of General Grandma's background. Apparently, she was retired, a widower with two children and three grandchildren. She was doing the wrestling thing because she was bored, and to earn a little extra money to 'get the Grandkids something nice this Christmas'. She was most active during World War II as a Golden Age superheroine named Captain Mom.

Posted by Adam Dickstein at 8:49 PM