Well this is it, the last entry for the RPGaDay Blogfest Challenge. The big finish. The Grand Finale!

Hard to believe I made it to the end. As my good friend F. Douglas Wall noted, I've tried to do a number of these in the past and mostly failed. Not this time. This time I had insomnia, a slow work schedule, and a few tricks up my sleeve to get me through.

Now I've come to the end, and I get asked the big question. What is my all time favorite Role Playing Game.

I went looking through my past entries on this blog to see if I've mentioned it before, and you know what I discovered? I'm rather non-committal on the subject. Oh, I've listed my top 5 or 10, 'in no particular order', or mentioned a number of games that are, 'among my favorites', but I've never really stated my favorite game unequivocally.

Part of the reason for that is that unlike some GMs and players, I just can't keep playing the same game forever. I get bored. I get ideas that don't necessarily fit the story or genre I am currently running. I save these ideas, and use them later when I run a different game. As much as I may love a particular game, there are other games I want to play and new games I want to try.

I think of it like my favorite foods. I love sushi and sashimi, but even I can't eat sushi three meals a days for the rest of my life. I'd go bonkers.

So I must have a favorite RPG.

STAR TREK Roleplaying Game
ICON System, By Last Unicorn Games
Long before I ever played a role playing game, I played Star Trek. Sometimes it was with the MEGO Action Figures, sometimes it was with the play accessories available (Light up Phaser, Walkie-Talkie Communicators, Cheap Plastic Tricorder), enabling us to play Starfleet and Klingons instead of 'Cowboys and Indians' or 'Cops and Robbers'.
Fact is, my friends and I, especially myself and my best friend at the time, Joe, were just crazy for Star Trek. We imagined how amazing it would be to explore outer space in a cool starship, fighting evil aliens, and get pretty girls in glittery, silver, lame' to dig how awesome we were.
When the FASA game came out I totally fell in love with it. It is still up there, a favorite with a very special, sentimental place in my heart.
As time marched on, and I experienced a host of different rules systems and approaches to gaming, I found FASA worked, and worked well, but I wished it was smoother, sleeker, and more cinematic. I wished it was more like West End Games' Star Wars game, without actually being that game.
If you've got a better description of Last Unicorn's ICON System Star Trek game, I'd love to hear it. To me, this game is the perfect middle ground between the obsessive detail we Star Trek fans love, while at the same time being simple, straight forward and flexible enough to remind us, yeah, this was a TV show. Lighten up jack!
I mentioned in the entry 'Day 18 - Favorite Game System' that the WEG D6 Star Wars game is similar to the ICON System Star Trek game mechanically. Star Wars hits that perfect sweet spot I am forever searching for between crunch and complexity and feel and atmosphere. Star Trek comes in a very close second, but it has the added benefit of being, well, Star Trek.
Moreover, it just does what I need it to do. It lets me run the kind of Star Trek game I want to run, with the kind of characters that fit the setting. It builds stories and subplots right from character creation on forward. The game is also pretty easy to mess with, and that is a major plus for me. It's not difficult to add to the game. New ships, new aliens, and even new overlays (professions/classes) are fairly simple to construct. 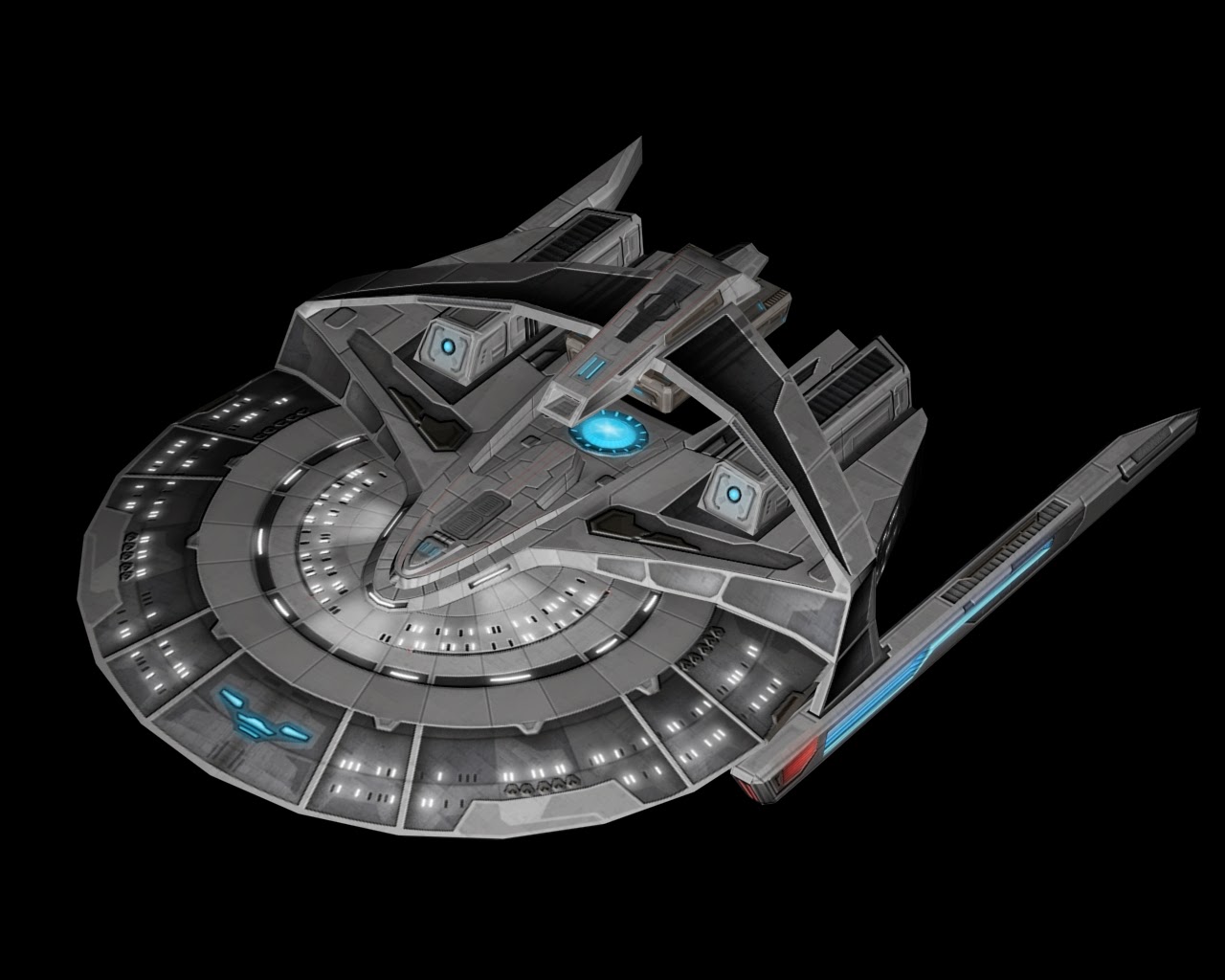 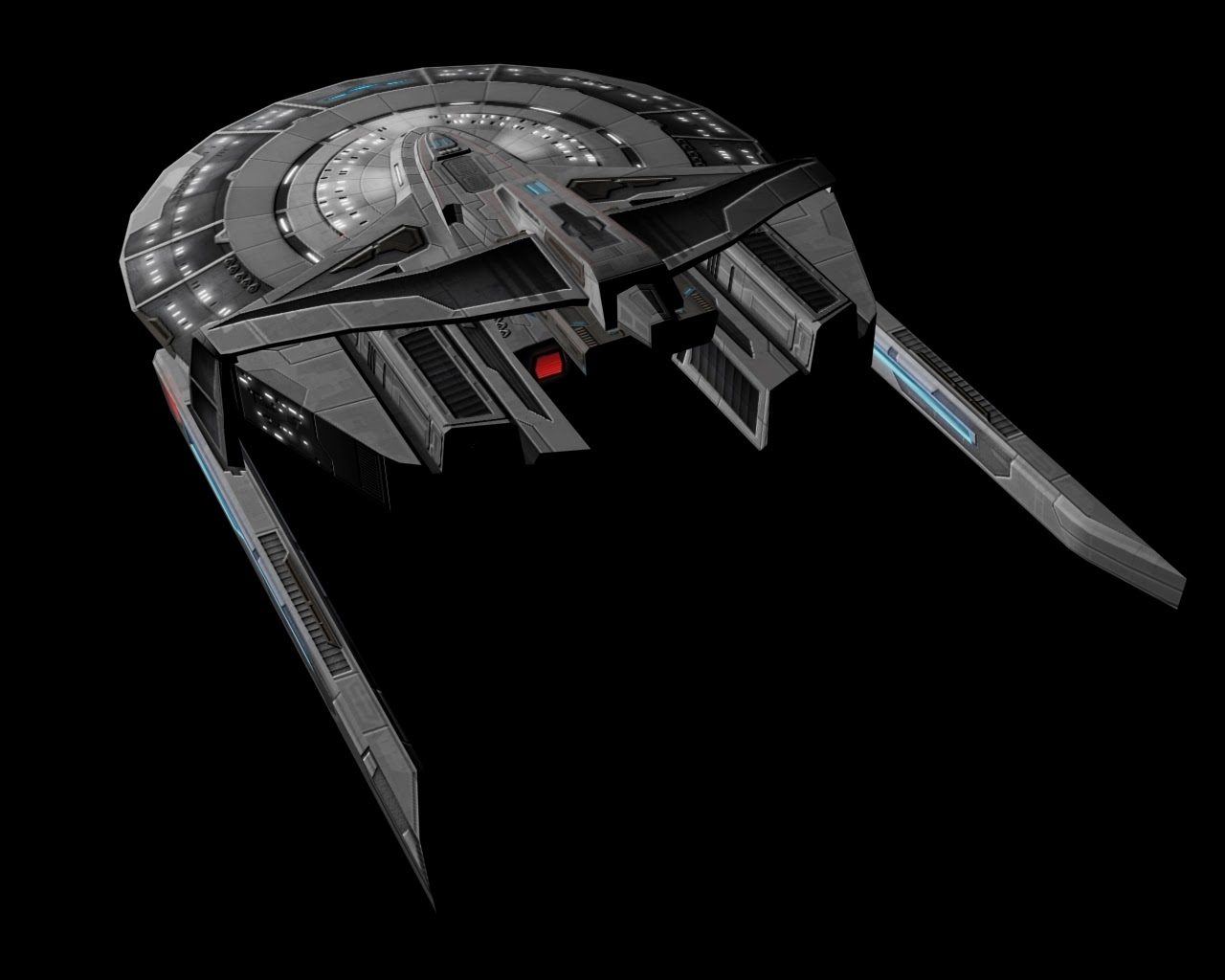 The USS Renown, A Miranda Class Variant CGI
Created by a friend for one of my LUG Star Trek Campaigns
Did I mention that it's Star Trek? Because, ya'know, it's Star Trek.
Star Trek for me is the ultimate RPG setting. It does everything I like.
The player characters begin the game capable, with a bit of detail. They don't start out as quickly named nothings, born a few seconds ago with no past, or knowledge of what they are doing, and why.
Everyone knows why they and everyone else is there. They may have different personal interests, goals, and mistakes from the past they'd rather leave behind, but they all know their characters share a future. They are boldly going where no one has gone before. They are going to defend the institution and ideals of the United Federation of Planets. They are going to seek out new life forms and civilizations. Cool. Nobody is trying to get revenge on anyone else in the group. No one is trying to get the most money. We don't use money exactly. It's complicated.
I really love that you all share the same overall goal, but your individual goals can be very different.
The Captain hopes to make Admiral so he can be stationed at a Starbase, and move his family out to him. He misses the wife and kids so much. The First Officer is looking to get her own command, and while she wouldn't mind taking over the ship from the Captain if he's promoted, she would love to take charge of one of those new Vesta Class Starships. The Chief Engineer isn't impressed by the flashy Vesta Class. He has his own design he's been working on. If he could just get it to the right person in Starfleet, he knows they'll approve its production. The Doctor only really joined to get access to Starfleet medical records and technology. She hopes to cure the plague outbreaks in the Chimera Angora System. She lost a lot of relatives to that illness and it still remains a threat.
Another thing I like about running and playing Star Trek? No murderhobos! You live on the starship until you get to go home to Earth, Andor, Vulcan, Vega Colony or wherever. You aren't there to kill things, though it may be necessary to do so if the lives of your crew, or the safety of your vessel, is threatened. You are not there to steal from people. You are there to learn, teach, spread the concepts and peace message of the Federation, and perhaps, in the process, get a new prospective on what it means to be Human.
Who's in charge here? The Captain! The party works as a team with a definitive team leader having the final say. Make is so!
There are just so many elements of running and playing in the Star Trek universe that I love, there is not way this would not be my favorite game.
Which makes me all the sadder that I am not running right now, nor have I been able to get a regular game of it going for some time. Sigh.
Still, I am scheduled to run of one shot of it for my bi-weekly group, so we'll see what happens.
There are always possibilities my friend Spock said...
AD
Barking Alien
﻿
﻿
Posted by Adam Dickstein at 8:26 AM