As with my previous post, and a number of others in this Blogfest, I haven't played a lot as a player, so the memorable encounters from which to choose from are limited. I didn't have a lot of encounters as a PC compared to how many I've run as a GM is what it boils down to. Of the ones I did have, I remember a good number of them, but that doesn't exactly make them 'memorable'.

More memorable than ones I've completely forgotten I suppose.


THE PUNCH
In my second session of William's Champions campaign, the PC hero group, Project: UNITY, was called upon to stop a drunken rampage by the supervillain known as Adamant.
I (Starguard) was briefed by team leader Omni on the way there as to who this fellow was. Adamant was a clone of A-List, #1 Most Wanted, Top-Super-Baddie-In-The-World, Kineto. Kineto created Adamant himself with some outside scientific assistance, and things went down hill from there.
First, Adamant didn't have Kineto's powers (thank goodness, though he was still plenty dangerous). Whereas Kineto could use kinetic energy to reorganize matter (among other things), Adamant could only reorganize his own body. He was more like The Absorbing Man than Firestorm or Molecule Man.
Second, Kineto at first treated Adamant as a son, but increasing, he reacted to him as a son he was disappointed in. Kineto's harsh attitude and overbearing, critical 'parenting' approach drove Adamant to despise Kineto, and Adamant soon turned to drugs and alcohol. Apparently the two hadn't been seen together in months, with Adamant appearing periodically in the employ of lesser supervillains.
In his current stupor, he was spouting things about being 'unwanted' and 'better if he'd never been created'. He would randomly grab cars, full of people, stuck in traffic by the damage he'd caused, and hurl the cars into the air or at buildings.
While our resident super speedster, Pulse, distracted Adamant, Omni, Starguard and Scaramangler (an Iron Man like character who went by his famous, public identity) focused on catching the cars, and helping innocent people get clear. Scaramangler eventually went to coordinate rescue efforts with EMTs and Firefighters, while Omni stayed alert for thrown vehicles, or Adamant's next move. Starguard meanwhile, did what Starguard does best...
Landing about two times arms length in front of Adamant, who was at that point in normal form, Starguard shouted to get the villain's attention, shattering the windows of nearby cars and a store front.
Starguard: "Know you this! I am Starguard! I represent The Pleiades Imperium, and lead The Protectors of Pleiades. Today, I speak for your world's Project: UNITY as well . You have acted to bring harm to innocent people. Surrender, or be destroyed."

Starguard: *Confused* "Be that as it may, I challenge thee. You may strike when ready."

Starguard struck a heroic pose, waiting for Adamant to hit him. Adamant for his part stood somewhat stunned. He shook his head, slapped himself a few times, and tried to sober up.

Starguard: *A bit surprised* "You are quite brave. Very well..."

Suddenly thinking this fellow was more honorable than he'd first judged him to be, Starguard threw a punch at Adamant's jaw. Moments before connecting, Adamant changed, his skin becoming a mixture of Stellar Titanium (a McGuffin metal of the setting, like Marvel's Adamantium) and Enchanted Alf-Runal Stone (like the Uru metal of Thor's Hammer).

You see, one advantage Adamant has over Absorbing Man (who must touch a material to become it), is that Adamant can recall materials he has been in contact with in the past. When drunk, high, or otherwise messed the heck up, he sometimes remembers their composition incorrectly, for better, or worse.

My Superman-lite strength, augmented by my Universal Energy field, slammed into Adamant's chin with enough force to demolish a mountain. The BANG-CLANG of fist hitting mystically infused stone/cosmically forged steel rang out for miles. Windows shattered, the force tore flags from their poles, and the ground shook like an Earthquake had hit the skating rink at Rockefeller Center Plaza, where we happened to be standing.

Adamant's body hadn't moved. His head had turned, slightly. He turned it back, and then massaged his jaw a bit. "That...was impressive. My turn..."

I winced. Not Starguard, me. I was not expecting this guy to be this tough. It was then that the encounter became the greatest I've ever had.

Other Player: "Holy crap. These are all the things your going through...literally through...after he hit you." 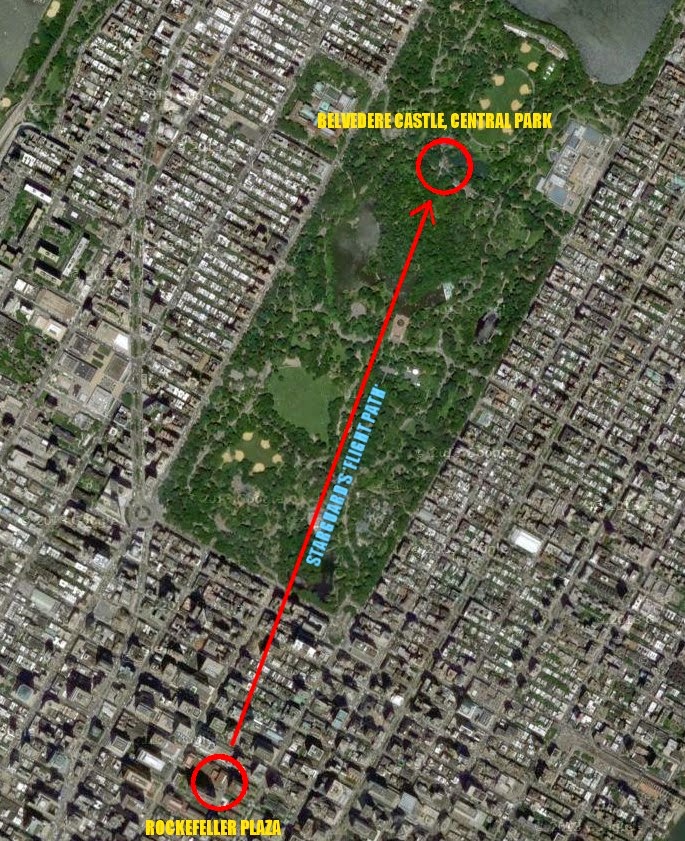 Rockefeller Plaza is located on between 5th and 6th Avenues, on 48th Street in New York City. Belvedere Castle (In the campaign, the secret headquarters of Project: UNITY), is located in the middle of Central Park, roughly 79th Street and 7th Avenue.

Adamant punched Starguard over 31 blocks. That is about a miles and a half. Starguard had one or two Hits left. He was nearly dead in his second appearance from a single punch.

Starguard spent the next four or five sessions in a medical facilities inside the HQ, healing up from his encounter. In the mean time, I created, and ran a new character named S.I.M.O.N..

Also in the mean time, Omni managed to use his telepathic abilities to calm Adamant, and put him to sleep. He was pretty pissed to find himself waking up in a super-prison holding cell. At the same time, he was visited in prison by Omni, Pulse, Tachyon (a former PC hero, now NPC) and others. The group managed to convince him to enter a rehab program and turn his life around.

Fast forward, Adamant is now the Bouncer and part-time Bartender at a secret bar accessible only by superhumans, and some supernormals who move within the cape and costume community. He has helped the world's heroes during the Dark Trinity Incident and the Invasion Earth War. He and Starguard are friendly rivals, repeatedly challenging each other to arm wrestling matches, and even playing soccer against each other for charity.