That's it. That's all it says.

My favorite character...of my own creation? From one of my campaigns? An NPC or one a player has played? From a game's setting canon?

What the heck is wrong with some specifics now and then, eh?

OK, I am going to go with my favorite character that I have played in a campaign. I rarely play as I've mentioned many, many times before. I don't even really enjoy playing as a player the majority of the time I do it. There was one campaign however where I not only enjoyed it, I loved it.

In the best campaign I was ever a part of as a player, I also played what turns out to be the coolest character I have ever had.

Starguard was created by myself and my friend William Corpening for the absolutely incredible Champions campaign he was running, 'The Age of Champions'. I designed his back story, powers, personality and look. William, Champions guru that he is, built him in the game.

It was honestly a year or so, perhaps more, before I even saw the character sheet and I played the character nearly every day of the school year before classes started and during lunch period. 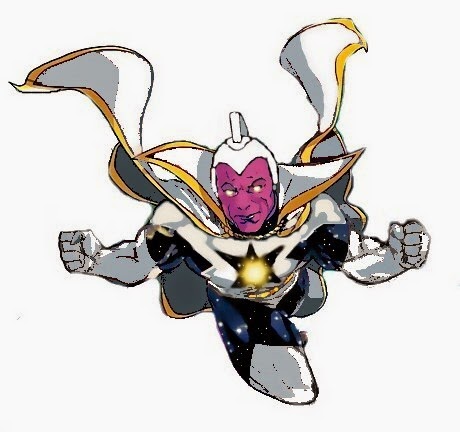 After a false start or two with the system that made me uninterested in trying it full throttle, my friend David mentioned that he was in a great Champions campaign. He asked me to talk to his pal, a guy named William, about a problem Will was having with their campaign. I didn't really know William at the time. All I knew of him was that he was one of the three most popular GMs in our high school (A fellow named Josh or Joel - I forget - was another and I was the third).

William had a problem player who was making the game miserable for the Dave's character Omni as well as many of the other hero PCs. At the same time the player's character was brilliant, interesting, a good guy on the side of the other PCs, yet fanatically prejudiced against extraterrestrials, of which David's character, the supergroup's leader, was one.

Will had heard I was a great GM from other players at the school and of course from David, who was a mutual friend and one of the few people to game under the both of us. He made the point to me that a great hero needs a great villain and vice versa. Since the trouble player was technically a hero secretly acting villainous, Will suggested I play an alien who comes off as a villain at first but is actually deeply honorable and heroic. I loved the idea and after a few trial runs testing out the Champions system with another character of mine, I gave Will my idea for Starguard.

Starguard is largely inspired and influenced by Marvel's Gladiator, and Mon-El of DC Comics. His powers resemble Superman or Mon-El but he also has a little Green Lantern thrown in. His speech pattern is akin to Thor crossed with other Marvel Comics cosmic characters (especially the Watcher). His personality is somewhere between Thor and Prince Namor, The Sub-Mariner.

His origin is as follows:

Amac Deim was once a common member of the warrior class of the Pleiades Imperium. Over the years, Amac's numerous victories enabled him to raise him up from the lower ranks of indentured soldier to serving as the right hand of Prince Jocal, son of the Emperor of Pleiades. Jocal and Amac become close friends over time. Jocal's younger sister, Sarun, had strong feelings for Amac and those feelings were mutual. Life for Amac was brutal and intense but good.

Not long after turning 25 Terran years of age, Jocal's uncle, Roteb, passed away in his sleep after many, many years of service to the Imperium. Roteb had been the Starguard, champion of the Pleiadesians, who was given incredible powers by the Heart of Pleiades, a cosmically powered gem (the size and shape of an American football).  With the death of the Starguard, the Heart of Pleiades would reform at a random location on the planet and a member of the royal family need only touch it to be imbued with it's Universal Field Energy and become the next Starguard.

Jocal set out to find it and he took Amac with him.

After many harrowing adventures, Jocal and Amac finally found the golden, glowing crystal sitting on a rock, not far from the entrance to a deep, dark cave on an island situated on the planet's Southern Hemisphere. Around this same time, the Pleiadesians' long time enemies, the insect-like Hzeel, attempted an invasion of the Imperial Throneworld. Several small Hzeel craft landed just off the island they were on and Jocal and Amac ran for the cave to get a better assessment of the situation.

Jocal was eager to get the Heart of Pleiades and to keep it from falling into enemy hands. As Jocal raced out of the cave for the gem, Amac took off after him, trying his best to cover his friend's bold action. Unfortunately, two Hzeel soldiers clipped Jocal with their energy blasters just as he was about to touch the crystal. Acting on instinct, Amac threw Jocal over his shoulder and scooped up the crystal for later, with the intention of bringing them all back to the cave and waiting for reinforcements.

That's when the crystal, the Heart of Pleiades, exploded in a burst of golden light! Amac had become the new Starguard! But how? He wasn't of royal blood...was he?

After defeating the island's Hzeel invaders and bringing Jocal home to the palace, Amac proceeded to team up with the other heroes of the Imperium, The Protectors of Pleiades, to drive the Hzeel away for a good, long time.

It was later revealed that Amac is the bastard son of the Emperor's brother (the previous Starguard, Roteb) and indeed of royal blood (it also means Sarun is his first cousin so...yeah...that sucked).

Now, as the latest Pleiadesian to carry on the mantle of Starguard, Amac leads The Protectors of Pleiades in the defense of the Imperium, its allies, and a tiny, blue planet on the outskirts of their territory called Terra (or Earth by the inhabitants). Why protect Earth? Well, as it turns out the long lost rightful heir to the Mandaarian Republic is hiding out there as a superhero. His people and the Pleiadesians are bitter rivals but not at war at this time. Starguard has sworn to ensure this person's safety until such time as he can return to his homeworld of Mandaar, retake the government, and hopefully bring about an end to any Mandaarian/Pleiades hostilities.

As with all Pleiadesians who leave their home planet, Amac possesses super-strength, endurance, high resistance to physical harm, flight, heightened senses, and the ability to project beams of heat from his eyes.

With the addition of the Starguard power, Amac is covered in a shimmering, golden force field that can be used in a number of ways. By focusing the energy of the field into one of his natural abilities he can become 5 to 10 times more powerful than a standard Pleiadesian. He can be stronger, fly faster, move at super speed, etc.

The field can also be directed toward a particular part of his body so as to better protect him (by 'pooling' it over the spot an enemy is targeting), or increase the damage he deals (wrapping it around his fist as he punches for example).

(Basically Starguard is a lightweight Superman with a Green Lantern like force field that boosts him to Superman level and even beyond after enough points. Plus, it is a versatile utility power. By flattening and extending the field to the sides I could protect more civilians behind me than just using my body would. By shaping the field into a corkscrew shape or drill formation Starguard could tunnel through the ground for example).

Starguard's mission on Earth to protect the Mandaarian who calls himself Omni is important but his first priority is to the Pleiades Imperium, its Emperor, and its people. He is occasionally called away from Earth to attend to Imperial matters.

The Pleiadesians have a reputation of being militant and war-like, which is not unfounded. Their Imperium is expansionist and somewhat aggressive but they are not the cold, conquering warlords they used to be. They have evolved even if interstellar legends paint them as bloodthirsty space vikings.

The warrior caste of the Pleiadesian people has a complex system of honor not unlike those of various martial groups throughout Earth's history. Starguard still follows this code and it can be used against him.

Magic can counter and disrupt the Universal Field Energy that powers Starguard, and psionic attacks can temporarily make it difficult to direct the field as desired. Amac has learned to discipline his mind and psychics need to know he is not an easy mark.

I love this guy and I love playing him. Hopefully I will get the chance to against some day.